The latest fighter from Aegis Dynamics 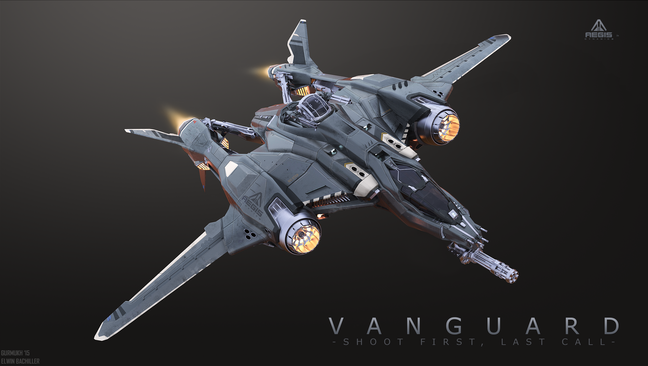 The A3G Vanguard is the United Empire of Earth’s dedicated deep space fighter. Initially developed as a bomber-destroyer, the Vanguard is a hard-charging bulldog of a ship which features extensive forward-mounted weaponry designed to tear through the shields and armor of other spacecraft. Four high-caliber forward laser cannons and a massive central Gatling gun give the Vanguard an unprecedented amount of sheer striking power. So-named because their multiple-jump range allows them to form the forefront of any military expedition, Vanguard have seen extensive service against the Vanduul. 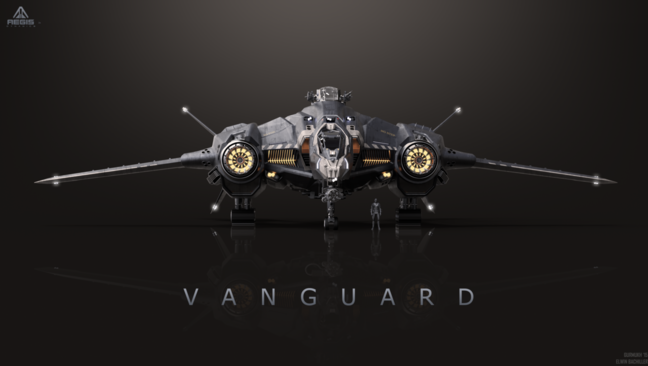 The Vanguard trades the maneuverability of the Hornet, Lightning and Gladius for extended range, armor and durability. With more hardpoints and increased space for onboard computer systems, the design can boast improved radar and a credible electronic warfare suite. In combat, the Vanguard’s roles are extensive: long range jump scout, extended duration patrol/reconnaissance ship, fighter-bomber (when equipped with torpedoes), tactical command and control ship, bomber interceptor and, in the proper hands, even a fighter-killer. The Vanguard’s extensive range can allow for missions lasting days or even weeks. Internally, the ship is fitted with sleeping berths and reclamation facilities to support such missions.

With a notable silhouette, the Vanguard is best known for its distinctive twin X-Forge engines, which allow for both an impressive top speed and an extensive backup system for enhanced combat survivability. Coupled with a superstructure composed from a distinct tungsten alloy, more than one Vanguard pilot has returned to base with little more than a single engine and the charred remains of a fuselage.

Vanguard units have been assigned to both planetary bases and aboard larger space stations. The fighter’s legendary durability allows it to operate in all-weather conditions with limited maintenance and makes it particularly beloved by the hard-fighting UEE Marines, who make frequent use of its ability to comfortably operate from makeshift combat bases.

Though Aegis Dynamics does not officially offer a civilian variant of the Vanguard, working in conjunction with the UEE’s Frontier Protection Program they have made a number of the mil-spec Vanguard available to civilians.

All specifications are subject to change for game balancing. 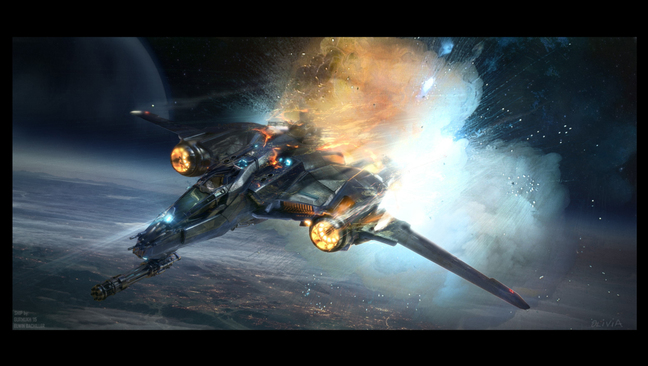 We are offering this pledge ship to help fund Star Citizen’s development. All of these ships will be available for in-game credits in the final universe, and they are not required to start the game. Additionally, all decorative ‘flare’ items will also be available to acquire in the finished game world. The goal is to make additional ships available that give players a different experience rather than a particular advantage when the persistent universe launches.

The Vanguard is being offered for the first time as a limited concept sale. This means that the ship design meets our specifications, but it is not yet ready to display in your Hangar or to fight in Arena Commander. The sale includes Lifetime Insurance on the ship hull and a pair of decorative items for your Hangar. A future patch will add a Vanguard poster and then once the in-game model is finished you will also be given an in-game Vanguard mini ship model! In the future, the ship price will increase and the offer will not include Life Time Insurance or these extras.

If you’d like to add one to your fleet, they’re available in the pledge store until Monday April 6th. You can also view a detail of the Orion in the Holo Viewer in the Tech Overview of the ship page!