Also, special thanks to Tony Zurovec and Erin Roberts for their help in answering your questions. 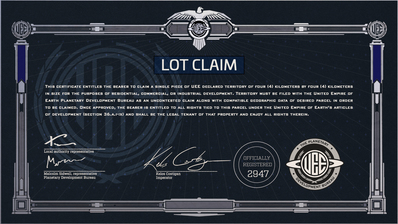 Are there any passive expenses to owning property? (land tax, maintenance, insurance) If so, how costly will they be?

The passive expenses associated with the ownership of property are controlled by the goods and services you purchase to protect, operate, and maintain your land and also the equipment and structures you place upon it. If your land is rich in precious metals and you’re concerned about theft, for example, you might procure your own fleet of security drones to keep close watch over your real estate, which will in turn require routine maintenance that you may elect to outsource. Alternatively, you might elect to hire mercenaries or contract with an organization to safeguard your burgeoning empire, either of which will cost you a recurring fee. Automated mining equipment, refineries, power plants, and other modules that you may construct will require ongoing capital investments for new parts and supplies to remain in working order. So passive costs will ultimately be dictated by player choices.

Can you move a land claim, e.g. “unclaim” a piece of land you have and claim another piece instead?

You can’t unclaim a property and switch it for another, but you can sell your property back to the UEE, a property broker or another player at an agreed or present market value. If you bought a dry patch of desert and struck gold but don’t want to bother with the excavation – or the security hassles of guarding it – you could likely sell it for a profit. If, on the other hand, you’re just looking to dump a worthless plot of land back on the original seller you’re likely going to take a pretty good hit.

Can I kill trespassers without becoming an outlaw?

No. Trespassing is a minor offense and will not elevate a player’s criminal status. Only players that have committed a serious transgression – such as damaging or stealing private property, including any resources that may reside beneath or upon your land – may be legally assaulted within UEE space without the attacker committing a criminal act themselves. 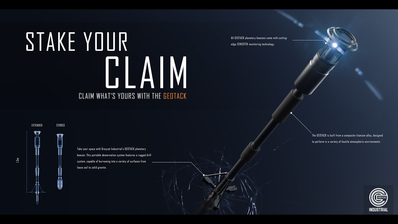 Can you extend a land claim to make it bigger?

You may add as many parcels to your estate as you wish, provided that the neighboring lots are available to claim or are for sale from another player.

Will it be limited or controlled how much land a person or org can claim?

There is no limit to how much land an individual player or organization can claim. However, there are enormous quantities of land available and players wanting to maximize the likelihood of earning a return on their investment will need to be selective. Further, the difficulty and expense of procuring, exploiting, and protecting that land increases with the area, meaning that most organizations will reach a natural limit as to how much property they can effectively control based upon their size. 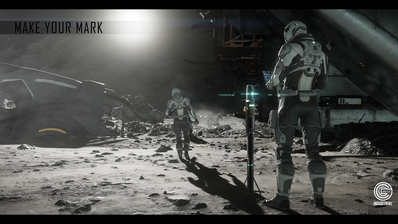 What if a pirate buys a land claim. Will the UEE now be bound to protect the unlawful player?

UEE security will engage any criminals that they encounter, regardless of whether or not they own property. They’ll also, however, act to protect the property of any private citizen, regardless of whether they are a criminal. If a property owner is a felon and in the vicinity when a UEE force arrives to deal with another player committing a crime upon their property, both the owner and the other party would be considered targets.

Can a land claim be revoked by UEE? Do land claims ever expire if the owner has not interacted with it in a certain amount of time?

At present, once you own a parcel of land it’s yours until you sell it.

How far above and below the ground is considered part of our claimed land?

A land claim gives you rights to everything on and below the surface of your parcel. The skies are community property.

Can you Claim Part of Water ? or Just all Land?

The oceans and other major bodies of water are considered a public resource, and as such are not available for sale. However parcels that include ponds or lakes or other liquefied resources – can be harvested for profit and belong to the land owner. 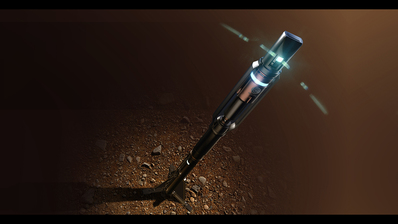 What kind of protection against attack is covered by the license? (if any)

The natural resources embedded upon or within your property and the objects and structures you place upon it are considered an extension of yourself. Thus, anyone attempting to steal from or attack those assets is committing a criminal act, which UEE security will deal with as they would any other transgression of a similar magnitude.

Can we charge other players and organizations (or NPCs) rent for using our land?

We do intend to allow players to license access to their property to other players and NPCs for a recurring fee.

Can you place landing pads and hangars in the land you have claimed?

We are planning to allow for the construction of landing pads – along with a variety of other modules – when building an outpost. Hangars may follow at a later date but it’s not currently on the drawing board.

What role does insurance have in land claims?

Your property claim is on file with the UEE and cannot be seized by another without your permission. You will be able to insure structures you build on your land. 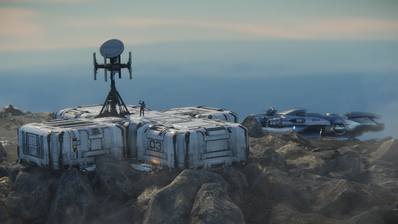 Will I be warned when entering land claimed by others?

Yes. Your mobiGlas can patch into the UEE’s property network to inform you when you’re on or near private property. Since some players will want to entice others to visit their outposts, these signals can be set to either generate a warning or extend a customized welcome.

Can I alter the terrain within my land claim, such as creating a lake?

We don’t have any current plans to allow players to dramatically alter the topography of their land. We may, however, allow the composition of soil on the surface to be subtly altered through various processes so as to allow for more effective farming. Longer term we may support some level of localized atmospheric modification to allow further control and refinement of this endeavor.