Below are answers to the most voted for questions in our Hammerhead Q&A thread that we posted last week on Spectrum. Thank you for taking the time to submit your questions and voting for the ones you care about most.

Also, special thanks to John Crewe, Adam Parker, and Steven Kam for their help in answering your questions. 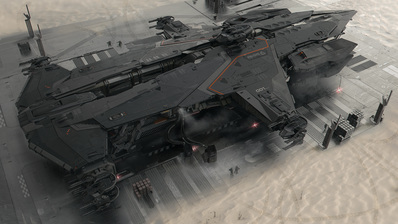 Are the ship computers powerful enough to run all turrets by AI Blades?

It depends what other Computer Blades you want to equip and whether you upgrade the Computer items, but as it stands, the plan is that you won’t be able to completely convert all turrets to be controlled via AI using the default loadout. We presently estimate that 4 of the 6 can be converted to AI as standard without any extra item tweaks but this system is still to be implemented.

Are the large Power Plants sufficient to run 24x S4 Laser Cannons or is the Hammerhead designed to use ballistic cannons?

Yes, the default power plants are able to handle the energy requirements of the default weapons. It comes equipped with very efficient military grade power plants for this purpose, however, running ballistic weapons does provide another avenue of pursuit in terms of maintaining fire output.

What’s with the big hole in the middle? Could it not have been filled with something like cargo or living quarters or was it just a design choice?

It’s a design choice and there are practical reasons for it as well. In our Shipyard post on Ship Mass, we indicate how we derive ship masses from their geometry. The Hammerhead is pretty fast for its size, since one of its duties is to help screen and protect larger ships from fighter attack. An increased internal volume – even from “filling in” the negative space, would add mass. In-lore, the UEE has ordered a lot of Hammerheads – thousands of them – for a combat-dedicated role. Adding mass for off-mission amenities wasn’t deemed an effective design choice by the UEE Military.

How will the Hammerhead’s speed and maneuvering compare to similar ships like the Polaris?

The Hammerhead is aimed to be more nimble than the Polaris but with ships of this type, it’s all relative. Ships of this size aren’t dogfighters, they’re mobile weapons systems. The Hammerhead excels at being a mobile defense ship and keeping steady or at least providing smooth movement to help the turrets stay trained on their targets.

Does modularity mean we will be able to install a scanner station/extra fuel tank/computers/medbay? Is there something we can install into the gap in the middle?

Please see the above answer. The negative space is not a hardpoint, and plumbing or piping it to serve as one would impose an added cost in mass that doesn’t serve the Hammerhead’s military mission profile. The Hammerhead, though, provides an excellent defense for ships that you’d want to carry scanners, fuel, or medbays, and most would want the Hammerhead’s existing computer and scanning resources devoted to enhancing the performance of its weapons first and foremost.

There seems to be some inconsistencies in the ship stats we have been given (mass, length, manned/unmanned turrets). Can you clarify these for us please?

The Hammerhead has 6 turrets, all manned. The confusion on the turrets came from a fairly last minute change to convert two of them from unmanned to all of them being manned hence how there were combinations of 6 and 6+2 kicking around. Development is a very real-time process, and here you get to see it – warts and all. We talk amongst ourselves and tweak the designs a lot even during the design process – as you’ve seen from our other features, a great deal of iteration occurs even in the concept phase and continues beyond! The mass value given was from the original design brief for the ship and wasn’t updated in time for the release with the new calculations as detailed in the recent Shipyard posts. We will be updating the dimensions and mass values on the ship stats page soon, but as the ship is in active production it may change in the future.

The turrets on the Hammerhead look quite fragile. Will this be true in game making its greatest strength also its greatest weakness?

To an extent, this is true – the Hammerhead’s turrets are somewhat exposed. Of course, as you can see from the turret emplacement design, this exposure is also what gives the Hammerhead’s weapons their excellent coverage and arcs of fire. It’s a tradeoff you’ll see in many weapon designs, in history and in the real world, in everything from tanks to warships – protected, hull-down, heavily armored weapon batteries tend to have limited arcs of fire, slower traverse, and other aspects that make them more cumbersome or unwieldy than lighter, more exposed designs. The Hammerhead is a patrol and escort ship, tasked with screening larger ships from fighters and small attack craft, as well as providing patrol in force primarily against non-capital ships. When arrayed against its intended targets, being able to bring multiple turrets to bear and overwhelm small targets with direct fire is the Hammerhead’s preference, especially when those smaller ships are not attacking the Hammerhead, but the charge the Hammerhead’s been tasked with protecting. The Hammerhead is a defender, but a very aggressive one that believes that the best defense against small ships is a good offense. What does this mean for the attacker? You know that the Hammerhead’s turrets are a relative structural weak point and might provide an entry point for boarding if attacked specifically. It might be a weakness, but we’ll leave it to you to decide whether it’s actually one that’s easy to exploit. 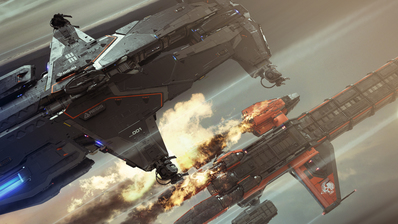 In the concept images with all turrets firing forward, the rear turrets are nearly hitting the front turrets. Is the Hammerhead not intended to fire all turrets forward? What are the intended firing arcs and convergence?

The Hammerhead is intended to hold a position with full 360 turret coverage on all angles, rather than be able to point them all in one direction. There are systems in place to prevent the turrets from hitting the ship so whilst they can fire all forwards, it isn’t an optimal solution. Recall that one of the Hammerhead’s chief duties is protecting other ships from attack by fighters and small bombers; the Hammerhead is not a dogfighter, it’s too large and too heavily armed for that. It’s designed to provide, not firepower in one direction, but flexible, massed firepower in any direction while adapting to the flow of combat threats around the ships it’s escorting. And when it’s not escorting anything, the Hammerhead is designed not to be safe to approach from almost any angle. 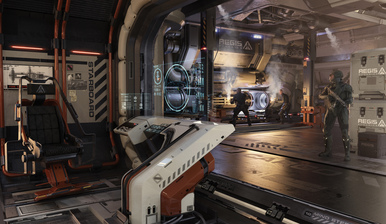 It seems like there are a lot of quality-of-life features missing, like a kitchen/meeting area/mess hall/etc. Are there plans to introduce any of these?

It is not particularly clearly shown on the cutaway images and fully built out for the concept images but we have left space for a small living quarters area built around the bunk room exterior and in between the upper/lower turret entrance rooms. It’s not the most luxurious ship, but then, warships often aren’t. The combat-focused mission of the Hammerhead, along with size and performance considerations, also lead to a focus on combat features over comfort. That said, I’m sure there are Hammerhead crews that look rather jealously upon the Polaris’ pool table.

The Ships Stats page lists the missile launchers as being “Marsden 683” racks. Does this mean you can also replace these with “Marsden 616” or “Marsden 625” racks in order to equip a small number of torpedoes instead?

We aim to make them interchangeable. The blockout for them currently meets the metrics for allowing interchangeability but things may change as the ship moves through the pipeline. For more information on Torpedoes vs Missiles please check out this Shipyard post which goes into detail on how the two types can be mixed together. 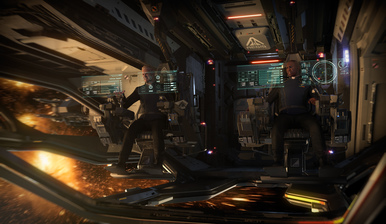 Does the Hammerhead come with military spec components or civilian ones since it is a military ship being sold to civilians?

It comes with Military Grade C items stock, although once these are worn out people may find it more efficient to replace with other types for durability given the expense/rarity of replacing these.

A dedicated anti-capital ship such as a Retaliator would be able to fight the Hammerhead effectively by tackling it from outside the effective range of its guns. The Hammerhead is intended to defend other ships from attack fighters with its many turrets, so massed waves of small ships stand little chance against it.

Will the Hammerhead be a practical option for everyday gameplay? Can I hop in with a friend or two and an NPC crew and e.g. go hunting pirates to make a profit?

Like all our ships, it can be manned with a minimal human crew, but the difficulty in doing this may outweigh the returns, depending highly on what missions you undertake. With the given example it would be perfectly possible to achieve that scenario but having a few more friends to help out would yield a more enjoyable experience.

Can we expect any ramming ability?

We don’t condone this sort of behavior, but for some reason Aegis did provide extra internal reinforcement in the head of the ship. 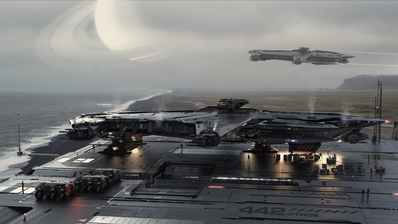 It seems to have a short range due to its M-size quantum fuel tank in relation to its L-size quantum drive. Can it be refueled in space by a Starfarer?

Of course it can be refueled in space by a Starfarer! Interplay between ships is one of the key gameplay loops of Star Citizen and whilst the L Quantum Drive can get you places the slightly smaller tank will require you to do a little more forward planning. Since we’re talking specifically about the quantum fuel tank, in UEE Navy fleet operations it’s contemplated that the Hammerhead usually sticks pretty close to the big ships it’s protecting.