With the recent addition of Spectrum, we can now allow you to add your vote to the questions you most want to see answered. The questions included below are a combination of those that received the most votes, similar questions that were merged into a single instance, and those we felt we could comfortably answer at this stage in the Aegis Eclipse’s life.

Now that the ship is concept complete, it will enter our development pipeline where many of the answers you see below will be fleshed out, and those missing will be determined and implemented. While it will still be some time before we see the Aegis Eclipse in game, we hope you’re as excited as we are as the game expands with the further development of stealth mechanics for the Star Citizen universe.

As always, a special thanks to Geoffrey Coffin, John Crewe, Todd Papy and Ben Lesnick for their help in answering your questions. 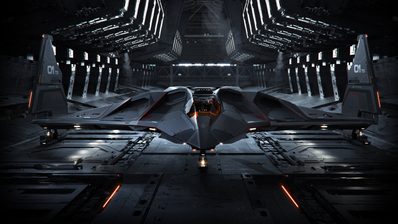 What does “stealth” mean within the Star citizen universe?

Stealth in Star Citizen resolves around being hard to detect via in-game systems, these being primarily radars and scanners. As mentioned previously in the Sabre Q&A, the Sabre and Eclipse are both built from the ground up around the concept of stealth whereas the Hornet Ghost was retrofitted to this mechanic. Not only does the specific hull design of the Sabre and Eclipse provide benefits to reduce their visibility on radar, but they are both equipped by default with Stealth-class items.

The item/component classes we currently have are Military, Civilian, Industrial, Stealth and Competition. Stealth class items of each item type provide the lowest emissions (IR and EM) at the expense of raw output and durability. Other classes will have comparable benefits and weaknesses allowing players to mix and match items to tune their ship’s behavior. Ships like the Eclipse come default with all Stealth class items, whereas the Sabre comes with some Military and some Stealth and the Ghost has Civilian and Stealth. We’ll be discussing the different classes of items in-depth in the future. 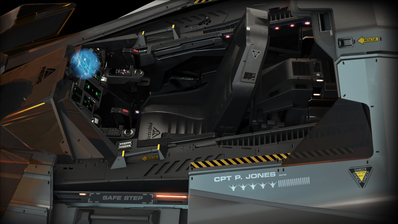 It is very rare that these items are hull locked and currently none of the default items (i.e. power plants and shield generators) are tied to a specific ship such as the Eclipse. As mentioned previously, we have the stealth class of items which provide significant benefits to signature reduction and applicable ships will either come default with these or be able to equip them. 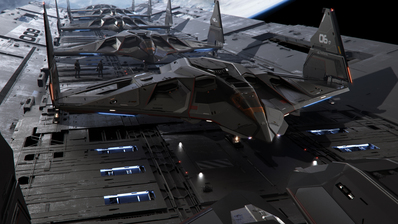 Wouldn’t Size 9 torpedoes in fighters be considered “game breaking” when the Retaliator already has S9 and the Polaris capital ship has S10?

The Eclipse was designed from the start to carry S9’s, the tradeoff is it doesn’t carry much else and is neither very tough, nor agile. It’s not designed to be a dogfighter, but rather a very specialized bomber that wants to approach a target silently, fire its payload, and leave. The Eclipse carries three size 9 torpedoes, and two size 2 ballistic gatling weapons. These larger torpedoes take a while to lock on to smaller ships, and combined with its relative lack of agility, that will mean the Eclipse will have a tricky time trying to use them in a dogfight. 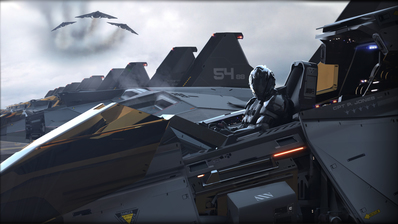 The Eventual $ 330 Flight ready tag is quite expensive for a single-person ship and given how little detail we have at this stage. What is the intention behind the ship’s design that warrants the high tag that we may be missing at initial glance?

For its size, the Eclipse punches far above its weight class with its ordnance armament. It’s capable of destroying large ships, and causing serious damage to capital ships. Its specialized loadout of stealth equipment and large torpedoes all contribute to its ability to perform this task.

With regards to the announced future price, keep in mind that every Star Citizen concept ship is priced below its component value in the in-game economy. In the past, it was difficult to predict the final price with ships going through significant iterations between the concept and flight ready stages. With the ship pipeline functioning as it does today, we can now provide a solid estimate of future pricing.

Will there be any civilian companies looking to retrofit this military craft’s torpedo ports allowing for stealth cargo running?

A fun idea, but this is not something we’re currently exploring.

Will the Eclipse torpedo bay be modular, so that the ship can be used for other purposes such as electronic warfare?

This is not something currently planned. The Eclipse was designed around this sole purpose, while something like the Vanguard series will be more flexible with its modularity. 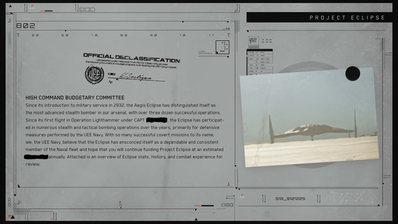 Can the Eclipse carry anything other than 3xS9 torpedoes (like for instance a ton of regular missiles or multiples of smaller torpedoes like the S5 carried by the Gladiator)?

Again, the Eclipse is an extremely specialized vessel, designed to excel at its intended task and role, so this is not something currently planned.

What ship hangars will the Eclipse fit into?

It’s a sizable ship, to be certain. While it cannot fit into the Polaris, it should be able to operate snugly out of a Javelin hangar. 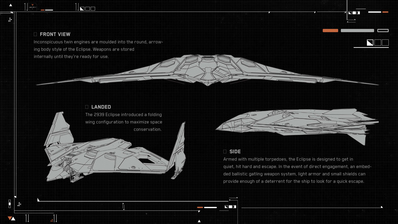 Can the Eclipse bomb both air-to-air AND air-to-ground?

If you can lock on to the target, you can attack it with the torpedoes whether it is air-to-air or air-to-ground.

What kind of quantum jumping range can we expect from this ship? 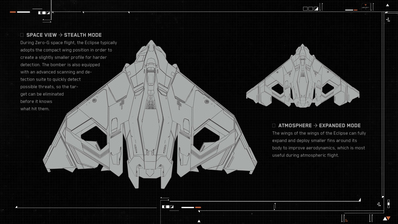 The Eclipse currently sits in-between the Gladiator (essentially a carrier born torpedo bomber) and the Harbinger in terms of range, and is expected to stay around there. It doesn’t currently have a lot of fuel reserves so a single mission is the best plan of attack rather than daisy chaining a few together, where a Retaliator or Harbinger would fare better.

Can a Terrapin pick up the trail of an approaching Eclipse (both in their default configuration) in time to warn a nearby fleet?

It’s possible, but it won’t be easy for either ship. Terrapins are extremely strong at detecting signatures and whilst the Eclipse is very good at having low signatures, it still has one. With a Terrapin in a good location, with an operator on their toes they should be able to detect it but whether they have time to get the message across is a different problem entirely. 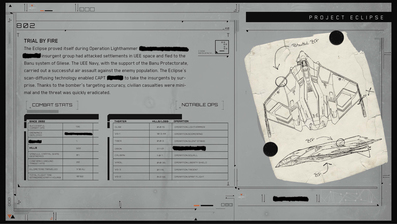 What purpose does the Eclipse serve in the civilian market? Can the bay be retrofitted for carrying cargo or data storage modules, or some other use, or is this a dedicated bomber suited for private military contractor use only?

There are no plans for swap-able bays, it is a dedicated bomber with that sole focus.

What are the expected Speed and Agility levels of the Eclipse

How many Eclipse will it take to take down say a 890 Jump, Polaris or Idris?

As always, we must preface this by reminding everyone that all things are subject to change during game development, but our current thinking about how this should currently play out is:

A pair of Eclipses, going unnoticed attacking an Idris with its shields down and its defense turrets disabled can cripple the ship if they hit in the right areas. Attacking such a large target like this though would be fairly foolish with such a small attack force though once you factor in the overall shields and defensive capabilities of everyone involved. Sub Capital ships however are much more vulnerable to an Eclipse or two, whereas assaulting a capital ship would most likely require a first strike with an Eclipse or two followed by a heavier sustained assault with Retaliators, Gladiators or Harbingers.

While the weapon compliment is only one component in the overall success of any dogfight, similar loadouts on other ships designed for that purpose can often be more effective than on a ship with a specialized focus like the Eclipse. Here, they function more as deterrent, or tool to finish off a crippled target, than an effective fighting loadout. The Eclipse isn’t supposed to be hanging around in a dogfight. This is a specialist ship with a very niche role: to deliver its devastating torpedo payload to unsuspecting targets.

Considering the sensitive nature of this ship, will purchases of this ship be limited in game, like by reputation? Does the UEE try to prevent ships like this from falling into pirate hands?

With the 2947 announcement, we consider the Eclipse to now be ‘for export,’ meaning that it can be sold to select groups outside the UEE military (including you). We anticipate there will be any number of limitations in the game world including both the number of bombers produced at any given time and other factors relating to reputation. It seems unlikely that the UEE would sell bombers directly to known pirates or other criminals, but it’s also easy to imagine other ways for such individuals to acquire military spec’d ships. 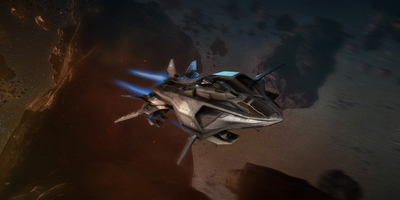 How does the Eclipse place among other bombers, specifically in range, speed, maneuverability, armament, survivability, role flexibility, and jump capability?

Range can be a tricky one to quantify, but basing it on duration and distance we see it as follows: Polaris, Retaliator, Harbinger, Eclipse, Gladiator. The first three all have support for long duration trips with on-board facilities while the Eclipse and Gladiator do not.

As speeds will naturally change over the course of development, the current ordering in terms of max SCM speed, going from fastest to slowest in a straight line acceleration, is as follows: Eclipse, Gladiator, Harbinger, Retaliator, Polaris

Maneuverability will be the Eclipse’s “Achilles’ Heel” and is squarely at the bottom of the smaller ships in this trait, with both the Gladiator and Harbinger outmaneuvering it.

Armament is another trait not easily compared straight across against other ships, as it obviously packs a devastating punch with its torpedoes, but once those are gone it will be considerably outgunned if you choose to stick around without re-arming. If you intended to hang around after attacking then the Eclipse is not the ship for this and a Gladiator or Harbinger are much more suited to that role. Survivability also comes into play here with the Eclipse being less durable than either the Gladiator or Harbinger, currently expected to have a similar durability to that of a 300i.

Basically, if you use it for it’s intended role, we expect the Eclipse to excel above others, but deviating outside of that the Eclipse will not fare well with its lack of cargo space, a single seat with no interior and limited weaponry. The Harbinger will allow you to maintain a longer time in the ‘verse and the Gladiator will pack a more rounded punch.

To summarize the intended roles between the four bombers (Polaris excluded):

Will I be able to purchase a large cloth to keep this covered in my hanger?

While the Historical Truth Act has permitted an unprecedented release of previously-classified UEEN military information (including the existence of the Eclipse bomber) it has NOT authorized any discussion of the Crusader Industries B419-AR Tactical Stealth Utility Tarp (TSUT.) Any discussion of its capabilities or availability should be reported to the nearest Advocacy agent.