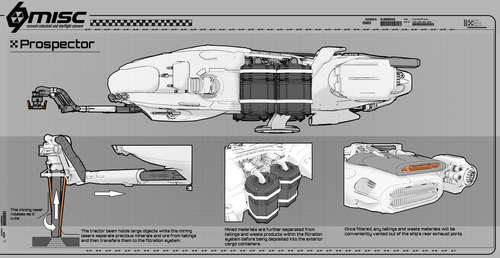 Another Concept Sale, another Question & Answer session. Since last Friday, we’ve been collecting questions from the dedicated Q&A post here and today our designers and artists working on the ship will answer 14 more questions! We are very excited to discuss this unique ship in more detail, so let’s jump right in to part 2!

Special thanks to John Crewe, Phil Meller, Paul Jones, Luke Davis, Todd Papy, and Jonathan Jacevicius for taking the time to answer these questions for us.

Can you set the Prospector to mine while you go out and explore the asteroid, or does it require an active pilot in his seat?

When in the landed mining state you will be able to leave your laser going while you take care of other business, but your productivity will suffer for it. You will have to effectively manage your heat and power on the laser, otherwise your mining rate will slow or you could risk damaging your laser.

Is there an emergency exit/escape hatch on the Prospector?

The interior is relatively compact, so the door to enter/exit is easy to reach in the case of an emergency.

Since there are 4 containers, does that mean the ship can sort and harvest 4 different types of ore at the same time?

We haven’t drilled down into too much detail on organising between the containers at the moment. Ideally you will be able to mine as many different types of ore as you want, and organise them as you see fit.

Will you be able to eject your containers for a speed boost in case of emergency?

The containers will have a mass value depending on what is stored in them and how full they are. So if you jettisoned some full containers in space, you might notice a slight improvement in ship responsiveness.

What will the maneuverability be like for the Prospector?

It will be on the poorer side of average. The Prospector only needs to maneuver among asteroids to get to specific mineral pockets and so will be in precision mode most of the time.

Is the ore filtering the same refining technique that the Orion has, or just a first reduction step to do a coarse removal of useless rock?

The Prospector will only be removing things like useless rock, the processing equipment on the Orion is much more advanced.

Do Prospector pilots risk the chance for gas pockets in asteroids to combust, or is this an Orion-only risk?

If the surface is big enough to land on and you start mining, you will encounter different hazards depending on the location and which minerals you’re mining.

Will the Prospector have any interaction with the Orion, like docking or easy ore drop-off?

There is no special interaction planned between the two. The Orion should be capable of taking crates from the Prospector though, so it should be able to give a full mineral load to the Orion and use its reserve crates to go and fill up again. It does synergise well with the Hull series ships though, being able to drop loads of cargo off for the Hull to take for selling while the Prospector can continue to mine a while longer.

In the concept art, what is the large disc beneath the ship used for?

The large disc is acting as a conduit for the ship’s scanners. A large part of mining will be in scanning and finding the resources you want to mine in space, but especially planetside.

Can you tell us a bit about self-defense/weaponry that the ship has if the Prospector were to find itself in a sticky situation?

Unfortunately the Prospector doesn’t come well equipped for combat, but has just enough to potentially warn off attackers and withstand some light fire. If you plan on mining in dangerous areas it might be worth paying for a fighter escort to save risking going alone and being found. It will come with two size one laser repeaters, a light shield generator and some basic countermeasures.

Will there be variants for salvage/repair? i.e. swapping out the arm for a repair arm.

There is nothing planned currently.

Is landing on a surface required in order to begin mining?

You will be able to mine both when flying in space and when landed. In space, you will be mining from pockets on the outer surface of asteroids. When landed, it allows you to reach deeper pockets under the surface that are potentially larger or more valuable.

Does the bed function as an escape pod?

No, it will have a bed similar to the one found in the Starfarer.

Will there be some type of cage/cover available to outfit the cockpit glass to allow it more protection?

It originally had a cage around the cockpit, but we wanted to keep high visibility and the exterior bars didn’t match the MISC ship style.