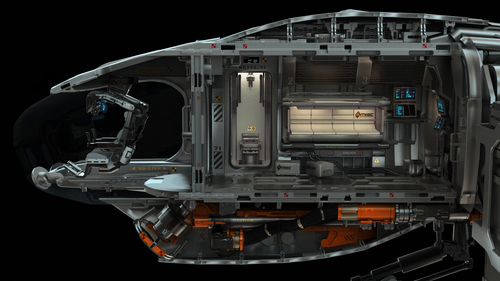 “If you’re doing this to strike it rich quick, forget it. Those are fairy tales. You wanna mine credits out of this rock, you better be willing to put blood, sweat and tears into it first.”
– Lonnie “Three Hand” Pardino’s Guide to Mining Alone

Another Concept Sale, another Question & Answer session. Since Friday, we’ve been collecting questions from the dedicated Q&A post here and today our designers and artists working on the ship will answer 13 questions for the community. Tune back in on this Friday to see the answers to 14 more questions.

The Prospector and its precision mining capabilities make it an ideal candidate for covert jaunts into dangerous space for the extraction of small quantities of highly dispersed and valuable commodities. We are very excited to discuss this unique ship in more detail, so let’s jump right in!

Special thanks to John Crewe, Phil Meller, Paul Jones, Luke Davis, Todd Papy, and Jonathan Jacevicius for taking the time to answer these questions for us.

Will the Prospector use the same RMAPs technology that the Orion uses?

The RMAP system on the Orion is manned by the scan operator, who is able to use it to provide precise information. As the Prospector is only manned by one miner, we wanted to put more focus on searching with the ships scanning system. So instead the Prospector will be using the scanners to provide general information in a local space to pinpoint nearby mineral pockets, like a larger, more advanced metal detector.

Will the prospector be better at tracking/recovering smaller amounts of valuable and rare mineral deposits, compared to the Orion operating on mass scale collection?

The Prospector will be much better at pinpointing specific resources and extracting just that type of mineral, targeting pockets directly rather than multiple at once.

Can only specialized ships (Orion/Prospector) mine or can you retrofit mining equipment on to other ships?

Mining equipment will only be able to be equipped on specific hardpoints, as they require other ship equipment to be present for them to operate (pipes, processing equipment and storage tanks), so they will only be on specialized ships.

Can you describe container transfer during planetary and space operations?

We can’t go into too much detail yet, only to say that containers can be dropped in space and on planets and then be picked up and stored by other ships.

Does the Prospector have a Quantum/Jump Drive and if so does it travel through small jump points?

The Prospector will come equipped with a light jump drive and light quantum drive and as it’s a small ship, it will be able to travel through small jump points too.

Yes they are, the aim is to have all containers compatible with this system. The Prospector and Hull series ships make a very good team! The Prospector is able to keep mining and dumping cargo pods for some time before heading back to a station, allowing the Hull series to do the transporting.

Unfortunately we don’t have any exact numbers to give you yet. But expect more information on this as we progress mining further!

What size shields will the Prospector have?

It will have one light shield generator, enough to protect it out in hazardous mining areas but not from sustained fire.

Will the Prospector be modular, allowing for mining slots to be swapped out for general cargo?

The Prospector has quite a specialised setup with the processing equipment and collapsible storage crates. These crates adhere to standard cargo measurements, but it isn’t currently planned to be a cargo transport.

It is mentioned that the ship holds 128 cargo units, but is that all container space(32 units a container) or does that include space in the hull?

Is the mining laser upgrade-able and are there different types of lasers depending on the type of mineral you are mining?

As we have several industrial manufacturers, expect to see a few options here for choosing a laser that’s fit for purpose. Some might be better and quicker at boring a hole to the target mineral pocket, or be better at mining lighter/denser minerals.

Can the mining laser be used as a weapon?

Technically yes, though it is not designed to cut through shields and ship armour. The high power draw, low damage and the short range of the laser in comparison to other ship weapons means it’s not an effective combat weapon.

Is the Prospector strictly a one person ship, or will it be a viable experience for two players?

The Prospector has been designed to be handled by one person from the pilot seat and has facilities/quarters for that one person only.