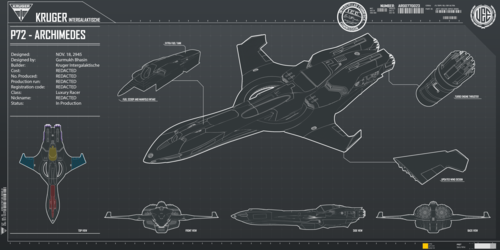 Three days of questions, three days of answers! On Thursday, we kicked off the concept sale for the new Kruger P-72 snub fighter. Today, we’ll be answering questions collected on the forums, and coming back Thursday for the Avenger variants, and finally Friday for the Anvil Crucible Q&A. For this, special thanks to Matthew Sherman for answering your questions. Enjoy!

Why would I want a Merlin over an Archimedes, and vice versa?

If you want to leverage the size/speed of the snub craft, an Archimedes will be ideal, allowing for recharging boost and more overall sustained fire from the energy weapons. If you need to make some decisive hits supporting your parent-craft and providing more short-term combat support, a Merlin and its centerline gun will be a strong choice. In the end, it will all come down to the pilot and the situations you find yourself in.

How does the P72 compare against the M50, 350R and Mustang Omega in Racing?

We’re targeting it to fit somewhere between the M50 and Mustang Omega in terms of overall performance, but we’re still getting things fully setup for this ship before deploying it.

Since the Archimedes is a variant to the Merlin can we dock one with any version of the Constellation?

Yes, any Constellation with the rear snub-dock can accept any ship based on the Merlin/Archimedes design.

Can the P-72 be operated off a 890 Jump or any other landing bay that it can fit in?

Yes, while the Constellation requires a specific mount for docking and launching a snub craft, any ship with suitable landing space can absolutely stage and launch an Archimedes.

Are there plans for a transport module of some kind to allow long distance transport of these snub ships by the large ships in the game?

Absolutely. While we’re still working things out in terms of ship-transit, we definitely want snub craft to have meaningful presence throughout the universe. From carried on a ship like a Constellation, or setting up a ship like a Crucible, Starliner or an 890 Jump to serve as a Race-team transport, we want to make sure you can bring your ships to the activities you find the most compelling.

I understand speeds are being tweaked at the moment, but as the Archimedes is tuned towards a higher-end specification, will there be engine upgrades beyond what it is fitted, or will the engines/thrusters fitted be the best for that sizing?

There’s definitely going to be room to grow, not only with the Archimedes, but with all of our ships. While the included equipment will put the Archimedes ahead of a Merlin in terms of its speed and performance, we absolutely want to provide enough tools and choices for players to experiment on their ships with.

What does having the air intake do? Allow it to refuel slowly as its flying?

The Fuel Intake for the Archimedes will allow the ship to naturally recharge its boost fuel while flying.

From the description: “Whether for added security, exploring a system or simply the joy of flying, the Archimedes is the perfect companion snub craft.” Does this mean the P-72 has a quantum drive, even though it’s been said that snub fighters are not able to fit one?

No, Snub craft still will be without Quantum or Jump drives, but the ability to recharge it’s boost fuel will definitely help the Archimedes maneuver around a system with more flexibility than a Merlin would. Additionally, the ability for all snub craft to land will give the Archimedes flexibility to explore and land to any available landing site on a planet or station.

Is this still intended to have four S1 fixed guns? The specs page currently shows the same two S1 and one S2 that the Merlin has. Where are the weapons located on the ship? The description says this is lighter than the Merlin – what is it losing? Less armor? Or are the materials just higher-end / lighter composites for the same level of protection?

We’ve made updates to the stats page to properly reflect the Archimedes hardpoints. It’s lighter-weight comes from replacing the heavier centerline gun found on the Merlin with the Fuel Intake system, as both the weapon and it’s ammo would be heavier than the 2 additional Size 1 weapons mounted to the Archimedes wing tips.

Why is the Archimedes being sold with LTI, while the Merlin wasn’t?

The Merlin was released already flyable, and had been previously available with LTI as part of the initial set of Constellation packages.