“The most important thing is to have a connection to your ride. Your ship needs to be your friend, your family. Why would you ever trust your life to something you didn’t love?”
– Kyle Valentino, founder of the Lonely Hearts Dragonfly Club 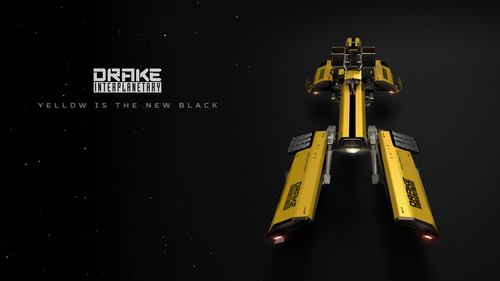 Where can you go with the Drake Dragonfly? You’re on Terra. Take a look at the horizon and pick out any point. A looming mountain, a faraway alien ocean teaming with life, a distant megapolis. You’ll be there in no time. Now you’re on Port Olisar. Crane your neck up and pick anything in the heavens. A blazing star, a desolate moon, a looming asteroid. The Dragonfly, Drake’s first ultralight ship, will take you there… and beyond!

Drake Interplanetary is fond of claiming that they build starships for the way you live; with the Dragonfly, they’ve gone an extra step and built a new way of life around the ship itself. Highly compact for easy storage anywhere and capable of traversing both space and ground, the 2947 Dragonfly changes the way we think about ships.

Durable and inexpensive, the Dragonfly can be operated by a lone rider, a team of two or serve as part of an intergalactic ‘motorcycle gang.’ Like other Drake ships, it is designed to operate alongside other ship platforms: imagine loading up a Caterpillar with a trio of Dragonflies, flying close support and retrieval for a Cutlass Red ambulance or strafing a massive cargo ship. It’s all possible with the 2947 Drake lineup.

The new Dragonfly is available now for preorder in an exclusive yellow early adopters’ variant. A selection of other packs are also available below, including a “Ride Together” two-pack that includes both the limited edition yellow Dragonfly and the standard production black model. Whether you’re looking forward to feeling the wind in your hair as you rocket across planetary surfaces or whether you want to experience nothing but your suit and your thrusters separating you from the void, the Dragonfly is ready.

Not just a ship, a way of life! This brochure, straight from Drake Interplanetary, introduces this ultralight snub and the unique culture surrounding it.

Feel that? It’s pure acceleration. The Dragonfly isn’t a ship, it’s an seamless extension of your whole body. There’s nothing between you and the void… and like all great pilots, you can hear the void calling. The Drake Dragonfly is fully rated to operate in planetary orbit, deep space and beyond.

What good is traveling the stars if you’re stuck taking a bus at your destination? The Drake Dragonfly doesn’t just tear up the spacelanes, it effortlessly adapts to planetary ground travel, both on and off-road! Whether you’re blazing trails on a newly discovered world or just want to run circles around the 9-to-5 crowd on their commute, there’s no other choice.

Take a good look at the Dragonfly, because under normal circumstances all you’re going to see is its dust. The Dragonfly is built around a simple philosophy: there’s nothing more important than acceleration and manoeuvrability. The fully open pilot’s seat and the rear-facing passenger slot allow the Dragonfly to behave more like a surgical instrument than a ship. Go ahead, leave them all behind.

Who says you can’t take it with you? You already know the Dragonfly goes where you go… and it’s also designed to live how you live. With the smallest available footprint and a compact design, the Dragonfly can easily stow away in an over-crowded garage, the tightest hangar or the smallest capital ship. Because part of owning a reliable machine should be having it there when you need it.

Don’t just be the first to own a new Dragonfly, show the world. The Drake Dragonfly is being produced in a launch-exclusive yellowjacket-and-chrome paint scheme to inaugurate a new kind of travel. This scheme is available only through authorized pre-orders. See your Drake Interplanetary dealer today, before it’s too late.

Want to get where you’re going without so much flash? The standard production model of the Dragonfly includes the Singularity paint scheme, featuring a deep black look with matte highlights. It’s elite sophistication and genuine class for a ship that doesn’t need to beg for either. Other color options are available, see your local Drake Interplanetary dealer for details.

You already know how reliable the Drake Caterpillar platform is. We’re pleased to announce that the Dragonfly has been designed specifically to work alongside the Caterpillar’s existing infrastructure. Up to three Dragonflies can be stored in each of this very hungry ship’s modular cargo units and deployed while in flight. There’s no better way to get a squadron of Dragonflies from place to place than aboard a Drake Caterpillar!

The ‘Cat is designed for versatility above all else. The distinctive doors on the front and side bays allow easy transfer of goods and equipment while spaceborne, quickly expanding the ship’s original search and rescue role. The cargo areas been adapted to fit a host of needs including Merchant Marine resupply ship, small-scale mobile salvage platform and traditional merchant transport. 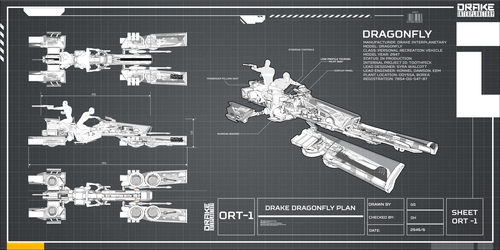 The Drake Dragonfly is intended to offer an even lighter type of utility snub ship than the Merlin or Archimedes. Though it is smaller, the Dragonfly is unquestionably meaner… and its ability to be used as both planetary and space transportation sets it apart like nothing else! (Note that the exposed cockpit means that the Dragonfly cannot re-enter; it must be carried to and from a planet by a larger ship. Like other snubs, it does not feature a quantum drive.)

When we first imagined the Dragonfly, we pictured a motorcycle gang of space pirates pouring out of a Caterpillar to take on a convoy. The Dragonfly is so inexpensive and so ubiquitous that it’s the perfect choice for a budget-conscious pirate gang… or any group that values the bottom line above strict safety limits. Beware the shipmaster who offers you a slot aboard a Dragonfly, he might just be sending you on a suicide mission!

From there, we realized that the Dragonfly would be less a ship and more an essential tool, an intergalactic pocket-knife that’s small enough, fast enough and maneuverable enough to get itself into tight spots where other ships would dare tread. With the ability to traverse planet surfaces, the Dragonfly isn’t just the tool of a pirate… it’s useful for explorers hoping to get the lay of the land or anyone else wanting to move from place to place quickly.

How much fun is the Dragonfly? You’ll find out sooner than you expect! Star Citizen’s designers have already begun setting up this new ship in the engine… because we’re as excited to jet around with so much freedom, too! Keep following the Comm-Link for updates on the Dragonfly’s status. We hope you enjoy this ‘different’ concept and we can’t wait for everyone to go riding on the spacelanes!

Drake’s smallest ship isn’t the only one in the works right now… we’re also building out their largest! Cloud Imperium’s engineers, designers and artists are working to bring the Caterpillar into the engine as we speak. Since the Dragonfly is intended to complement the Caterpillar, we’ve decided to offer you a sneak peek at some of that work. Keep following the Comm-Link for more on the Caterpillar, including a behind-the-scenes look at the work going into it in an upcoming Around the Verse!

Like all Drake ships, the Caterpillar has versatility in its DNA. With multiple cargo bays available to be repurposed for a multitude of functions, the Caterpillar’s modular design allows it to be perfect for everything from armored cargo hauls to effective search and rescues. And, when paired with the new 2947 Dragonfly, the Caterpillar can add one more role to its already impressive roster: a mini carrier. That’s right, the Cat can launch Dragonflies directly from the cargo hold as protection fighters or as agile scouts!

ATV Excerpt – Behind the Scenes of the Dragonfly

The Dragonfly is being offered for the first time as a limited concept sale. This means that the ship design meets our specifications, but it is not yet ready to display in your Hangar or to fight in Star Citizen. The sale includes Lifetime Insurance on the ship hull and a pair of decorative items for your Hangar. A future patch will add a Dragonfly poster and then once the in-game model is finished you will also be given an in-game Dragonfly mini ship model! In the future, the ship price will increase and the offer will not include Life Time Insurance or these extras. Dragonfly model will be the yellow version.

If you’d like to add one to your fleet, they’re available in the pledge store until June 27, 2016. You can also view a detail of the Dragonfly in the Holo Viewer in the Tech Overview of the ship page, and be sure to enjoy the Drake Dragonfly brochure, an in-universe artifact straight from Drake Interplanetary headquarters!

As with every Concept Sale, we will also be doing a Q&A post. For the Drake Dragonfly, we’ll be taking questions here in this thread and posting the answers next week. Look for the Comm-Link Schedule next week to find out when that post will go up!

Remember: we are offering this pledge ship to help fund Star Citizen’s development. The funding generated by sales such as this is what allows us to include deeper, non-combat oriented features in the Star Citizen world. Concept ships will be available for in-game credits in the final universe, and they are not required to start the game. In the case of the limited-edition yellow scheme Dragonfly, a limited number proportionate to those sold will be made available in the ‘Verse upon ship launch for players who do not want to purchase during this sale. Going forward, Drake will produce the black variant for in-game sales.

Additionally, please note that the Dragonfly will be entering the ship pipeline now, it has been fast tracked for engine integration, with designers already working to enable it in-game. All decorative ‘flare’ items will also be available to acquire in the finished game world. The goal is to make additional ships available that give players a different experience rather than a particular advantage when the persistent universe launches.