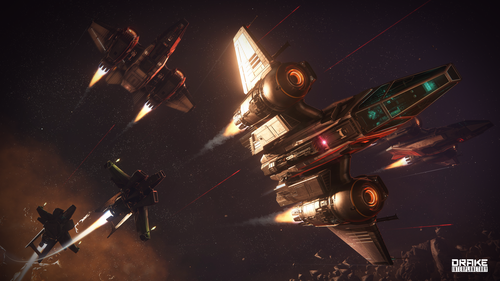 At Drake Interplanetary, we care about our customers. Our commitment to providing safe, dependable, and economical transport is why Drake Interplanetary ships have flown across the universe for more than one hundred years. Now, we’ve created an extra special offer for anyone seeking safety and reliability at a reasonable price.

In honor of the diamond anniversary release of the Buccaneer, you can now receive the Buccaneer and four of our other splendid models at a special discount. Have recent Vanduul attacks made you and your loved ones vulnerable? Then get the Buccaneer and Cutlass at a special two-pack price. Join us and become a part of the growing militia movement protecting frontier systems. Together, we can save the stars. This one-time sale ends April 10, so act fast. 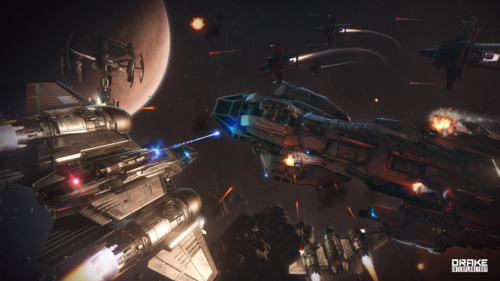 Because self-defense shouldn’t be a luxury item, we created the Buccaneer with the everyman in mind. This single occupant fighter is less expensive than our competitors, but just as effective. Multiple weapon mounts and two missile pylons guarantee you’ll hold your own if you’re ever caught in a scrap.

The sleek shape and light mass means nimble flying, so you can quickly maneuver out of harm’s way. The fighter also makes a nice companion for other ships in the Drake lineup, such as the Caterpillar. Defend your cargo and your loved ones with the Drake Buccaneer today. 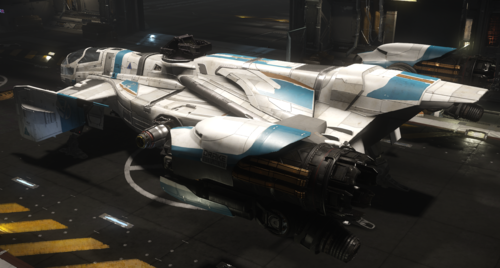 Drake Interplanetary is committed to the safety of all citizens and civilians, which is why we designed the Cutlass. This low-cost, low-maintenance ship comes with a larger-than-average cargo hold and dedicated tractor mount for facilitating search and rescue operations.

In fact, the Cutlass Red model is the go-to first responder for mobile medstations like the MISC Endeavor. The standard cargo hold comes equipped with a medical facility and Autodoc. Another popular model, the Cutlass Black, has been praised by local militia for decades. All products from Drake Enterprises are developed with your protection and security in mind.

Development Status: The Drake Cutlass Black became flight ready with Arena Commander 1.0. The Black is close to completing a major update, with the variants scheduled to follow.

Ever dreamed of open canopy racing like a pro? The economical Dragonfly turns that dream into a reality. Feel the wind in your hair or speed through the stars thanks to the modular chassis on this personal recreation vehicle. While in ground mode, skim across the rockiest of terrain with in-line mounted gravlevs. Fully extended outriders allow for exceptional mobility and responsiveness in zero-g mode. Go anywhere in the Dragonfly. The only limit to adventure is your imagination.

Drake Interplanetary promotes good sportsmanship and equality, which is why we’re a proud sponsor of the Amateur Open Canopy Racing League. Join the fun by getting a Drake Dragonfly today!

Development Status: Development of the Drake Dragonfly has been completed, it will premiere alongside procedural planets in an upcoming update.

Called “The Empire’s Most Secure Data Courier Service” by trusted industry leaders, the Herald is a high speed courier ship, capable of moving data quickly and securely across the universe. We don’t believe you should ever compromise between speed and safety when it comes to your personal messages. That’s why the Drake Herald comes equipped with powerful main thrusters and dual missile racks.

Your trust is important to us. So when you trust us with your private data, only the best protection will suffice. Everything within the Data Storage Pod receives a proprietary encryption algorithm. In the slim chance your data falls into unsavory hands, the algorithm will render it unusable. Own the best messenger in the universe. Own the Herald. 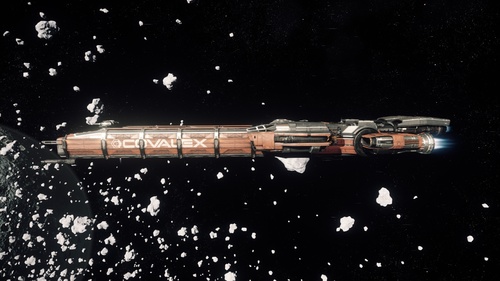 It’s said that beauty is in the eye of the beholder. Owners of the Caterpillar know that the beauty in this cargo ship is its seemingly limitless ability to mix and match cargo modules. In addition, the small price point makes cargo hauling a more affordable profession than ever. The Caterpillar is less expensive than other cargo ships, making it a popular choice for independent haulers. Thanks to the Caterpillar, more people than ever have become financially independent.

At Drake Interplanetary, we’re dedicated to making everyone’s life a little easier. That’s why the Caterpillar’s front cargo can house open canopy vehicles like the Drake Dragonfly, so you can access various landing sites with ease. The front cargo lift also folds into the cargo bay for smoother loading and unloading of your wares. Built with your safety in mind, the Command Module can detach from the body of the ship in the event of emergency. Fans of the Caterpillar refer to the Command Module as the “ship within the ship.” We hope that you call the Caterpillar your “home away from home” on those long cargo hauls. 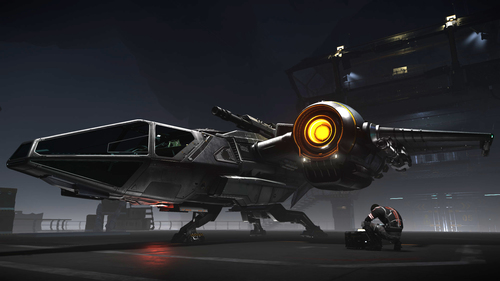 It’s the diamond anniversary release of the Drake Buccaneer! To thank our customers for sixty years of continued support, Drake Interplanetary is now offering a diamond anniversary discount on all our Drake gems: the Buccaneer, Cutlass, Caterpillar, Herald, and Dragonfly. Purchase the five ship combo pack and receive 15% off the total price.

Prefer to invest in self-defense? Then take advantage of our special two-pack price of $ 195 for both the Buccaneer and Cutlass Black. Fend off raiders and Vanduul with the best protection in the UEE. Both of these special offers expires on April 10, so get these Drake deals while you still can!