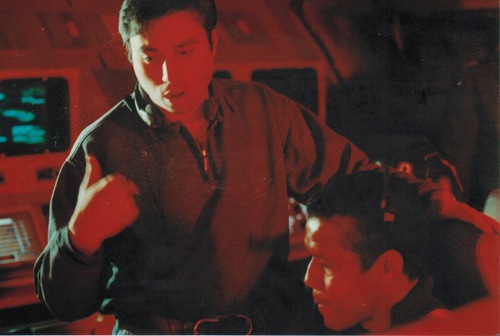 Note from the Chairman

Last week, Kotaku ran an article showcasing Arena Commander’s combat. While the focus was that dogfighting looks great in action, one other thing immediately stood out: the video was an Aurora pilot flying with a HOTAS and TrackIR setup… and he was schooling Hornet after Hornet! The video, embedded below, tells me that we’re on the right track in creating a skill based game where battles are decided by the abilities of the pilots just as much as the capabilities of their equipment.

One of the design tenets of Star Citizen is that it needs to be a complete experience regardless of what you have purchased. Someone buying a starter package needs to have exactly as much potential as someone supporting development by pledging for a new ship or a purchasing a new weapon. I do not want to make a game where you feel compelled to spend anything but time to continue playing.

In the Persistent Universe, that will be easy: you’ll earn credits flying missions, locating star systems, hauling goods, hunting bounties and through a dozen other activities. You’ll rapidly explore and expand your universe. But the pilots helping us develop our spaceflight in Arena Commander don’t have that ability… yet!

With Arena Commander 1.1, we intend to roll out a system called REC, or Rental Equipment Credits. In essence, you will be able to earn credits to rent equipment to use in Arena Commander by playing Arena Commander’s ranked modes. We want to reward backers for their time spent with the early game with a more expansive experience, not prevent them from accessing things that will be readily available in the Persistent Universe. You’ll still be able to support the development of the game by pledging for ships and weapons, and these will carry across into the Persistent Universe but you will no longer have to contribute additional money to fly a different ship or use a new weapon; You’ll have a choice. Spend time playing the game, which will earn REC to be spent on ships and weapons for use in Arena Commander or pledge for these items, supporting the ongoing development and running costs of the game. It’s the classic time vs money proposition and either way you’ll be helping making Arena Commander and Star Citizen better! This is always how the final game was intended to work and we’ve decided that we need to bring this dynamic into play sooner than later!

Star Citizen designer Calix Reneau details the system below, which we believe is a winner. Now, we’d like your feedback: is this the right direction for the system? Where would you like to see it go, in the near term and the long? Letting players earn credits in-game is a no-brainer, but working out the specifics is going to be an ongoing process no different from how we are continuing to work out flight controls and weapon balance!

From my perspective, Arena Commander is shaping up to be a fantastic standalone experience, something backers will want to continue to play in their new sim pods even after the Persistent Universe launches. I’m grateful for the testing and support the community has provided to get us to this point. It’s something every one of you should be proud of… and now let’s make it even better! 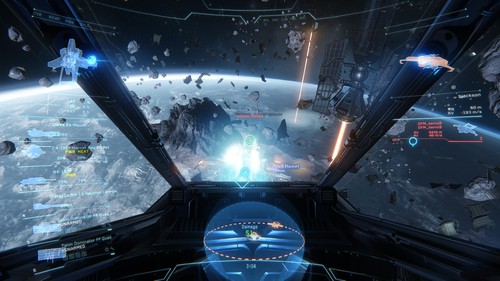 We’ve all been there: a budding young Aurora pilot loads up Arena Commander to play for the first time. That first battle isn’t a great success, but between the ‘First!’ medal bonus and a lucky missile, enough REC is earned that an F7C Hornet doesn’t seem that impossible to earn. A few matches later, the mechanics of space flight are starting to be understood, so the REC flows a bit easier and it isn’t much longer before even the Super Hornet is within reach. Diving all in for the big guns, our plucky hero has become death, destroyer of worlds… and it feels good! But as often happens, life gets in the way, and it’s over a week later before the Star Citizen logo comes back on screen. Imagine the surprise to find that Super Hornet still selectable in the Arena Commander start menu! A few matches later the rental use runs out, but it’s enough time to earn up the REC to take advantage that sweet renewal discount. Dogfighting is a great thrill of course, but eventually curiosity takes hold and the next rental is an M50. What a difference! Racing seemed so trivial before, but this thing can really fly. At this point, any new arrangement of ships or equipment is always attainable with just a little bit of focused play. Still, there was something special about that first Super Hornet, so maybe it’s worth keeping around…

REC, or Rental Equipment Credits, is a virtual currency that can be spent in Voyager Direct or the mobiGlas virtual store to rent software licenses on any equipment that can be used in the Sim-Pod (future iterations of Arena Commander will be accessed through a pod added to your Hangar.) Players earn REC through success in Sim-Pod activities – Arena Commander, the upcoming FPS Module, etc – with additional medals providing bonus REC and recurring incentives for progression.

How do I Earn REC?

REC is earned by playing competitive (ranked) multiplayer matches of Arena Commander, the FPS Module or any other Simulated Experience in Star Citizen. Each match awards REC from a common pot, awarding the greater share to the winners, which is then split among the members of the team based on performance. For example, in Arena Commander:

Players can also earn bonus REC from medals, which are awarded for various milestones – umber of kills earned, number of missiles dodged, total matches, etc. These medals track over multiple matches and are recurring, so players can always make some progression even if they only play a match or two here and there. 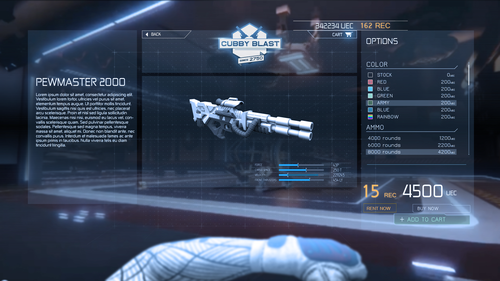 How does the rental system work?

All rented equipment is rented for one week of real time use – guaranteeing that you always get at least a little bit of time with the ship. Ships and weapons cost 10% of their UEC price, rounded up. Once an item has been rented, it can be renewed for another week at a 20% discount. Renewals can only be bought a week in advance. (Remaining rental time is visible in your RSI account and within the Sim-Pod HoloTable)

There are also broader goals available for the REC endgame – for example, we envision building a Community Chest into which players can donate REC that builds towards permanent prizes and other gameplay experiences. Imagine having the option between renting new equipment or helping the community earn something together… it should make for an interesting challenge!

Averaged at 1800 REC per hour. Please note that this currently represents ‘back of the envelope’ thinking; actual balance will likely alter significantly after the system launches and we determine how players use the system. But the goal remains to create a system that makes renting additional equipment a fun challenge rather than an impossible chore.

Can I use rented ships and equipment in non-ranked modes?

Yes, and there will be no limit on such uses.

How do I spend REC?

REC is spent on ship and equipment rentals or Sim Pod unlocks. This can be done from Voyager Direct, the mobiGlas, or the Sim Pod. Once a ship/item is rented, it can be renewed for 1 additional week at a discount.

As the system is developed, REC can also be spent to unlock additions to your Sim Pod, such as aesthetic changes like different background images/theme in the menus, or gameplay changes like opt-in handicaps which can be taken to boost REC yield at the cost of additional gameplay restrictions. Finally, REC can also (eventually) be donated to the Community Chest, a mystery box that results in Community Events when enough total REC is accumulated. Community Events benefit all players who log on while they are in effect.

Will my equipment carry over into the Persistent Universe?

No, equipment rented in Arena Commander will be available only in your sim pod. When the Persistent Universe launches, you will have access only to upgrades purchased with UEC (or provided as gifts during the pledge campaign.) But we anticipate Arena Commander continuing to exist in the Star Citizen universe; it is, after all, a game played in SC’s future!

Why have rental items instead of permanent ones?

We know that choosing rental equipment instead of permanent AC-only unlocks will likely be the most controversial part of this plan. We’ve run through countless scenarios offering one, the other or a mix of both… and what we’ve decided is that at this time, rental is the way to go. What follows is the five key points we used to make this decision:

We envision enhancing the REC system alongside everything else in Arena Commander going forward! In addition to building the system out based on player feedback, we have several systems we hope to deploy in future patches:

REC can be earned by completing personal and community daily challenges. Community challenges pay out at the end of the day if they have been fulfilled, and reward all players who have contributed to the challenge at all. These also have the benefit of allowing new gameplay features to be highlighted.

REC discounts on specific ships and equipment can be used to encourage users towards their use. Ships can also give bonuses to REC as additional incentive.

We are hoping to launch the REC system with Arena Commander’s next major patch, currently scheduled to be AC 1.1. This will allow backers to earn REC and spend them on store items. Additional functionality will be added as we go, just like the rest of the AC development process! Until then, please provide your feedback below. You’re helping us build Star Citizen AND Arena Commander, and we want to know what you think!

As with any design post, this article represents our current thinking for the systems covered. All content is subject to change as a result of testing. The numbers provided here represent data that is current as of publication, but which will likely be altered in a number of ways before launch to create the best possible Star Citizen experience.

In this series we provide an informational background designed to get new Citizens up to speed before they listen to our in depth discussion podcast: Tales o…