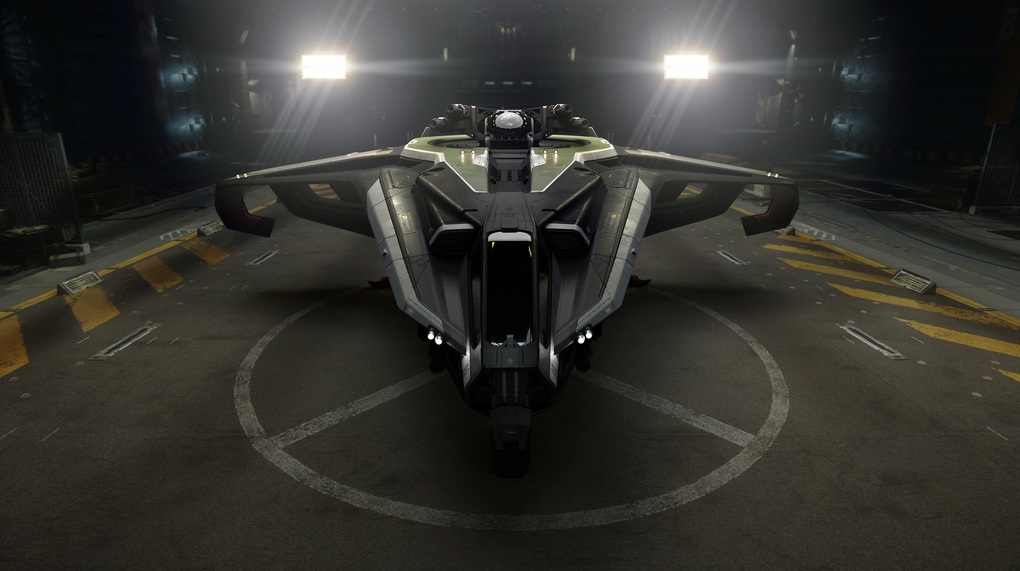 Meet the A4A Hurricane, a fighting spacecraft that packs a deadly punch into a slight fuselage. The spacecraft compensates for its lack of creature comforts with its powerful armament, boasting six guns capable of blasting their way through nearly anything. Hurricane pilots have yet to find an enemy shield they can’t knock down.

But enough of the marketing speak. You’ve got questions, we’ve got answers. Let’s get right to it.

Special thanks to Calix Reneau, Kirk Tome, and Steven Kam for their efforts providing answers to these questions.

These questions were submitted by backers to the Anvil Hurricane Q&A thread on Spectrum, and were selected based on the amount of upvotes received over the last week.

Can the turret be slaved like the Super Hornet?

The most upvoted question in the Q&A thread! The plan is to support slaved turrets in general – and the Hurricane’s turret will be no exception. While the balance factors for these slaved turrets are not yet fully determined, the current design direction would require the use of an avionics blade (you can think of it like installing a card into one of your PC motherboard slots) to provide the functionality and manage the additional workload on the targeting computer and related gear when in use. Up to this point, we’ve integrated some of the remote turrets on the current list of flight-ready ships on case by case basis so far, but the long-term preference is to establish a consistent systemic solution to remote turret integration rather than simply accommodating the various edge cases one ship hardpoint at a time. Overall, a lone pilot will not be totally kneecapped if their gunner decides to take the day off, but solo operating a ship designed for multiple crewmen would need to consider a loadout adjustment, and avionics would be part of that decision.

Where does this ship stand in speed and maneuverability to other ships?

The Hurricane is faster than it is nimble, designed to rush into trouble, wreck things, and then rush back out to regroup. It was designed with speed and hitting power at the cost of durability. While nimbleness always seems like a nice trait to have, Hurricane drivers have historically noted that giving in to the temptation to engage in a turning dogfight and keeping pace in the middle of the fray does not play to the Hurricane’s strengths. A good-sized boost tank gives it plenty of afterburner to help it scrape its way out of those tougher situations, but it’s for sprinting, not marathons.

Will there be a flashfire mount to replace the turret with an appropriate sized fixed mount? / Are we able to change out the top turret for one large fixed gun?

The flashfire mount design is being revisited. The Hurricane’s turret was designed to fall in line with the newer turret/remote gimbal system. The current direction is to limit the allowed size increase / mount cost to prevent too much edge-case exploitability; where a S6 would be overkill, 2xS4 might be ok. Furthermore, remote gimbals may have stricter resource bandwidth than turrets, so the peak installed performance of such guns may be less than if they were placed on a standard fixed mount, but again, this system is in the middle of revision, so please understand that this is very much subject to change.

Will this be an effective ship for a solo pilot or will it need someone in it’s turret to function properly?

The Hurricane is at its best when deployed with a pilot and turret gunner who coordinate well with each other. If you’re flying a Hurricane solo, the natural tendency is to fight while focused mainly forward; even with a look-aim capability, you’re going to be largely focusing your firepower within a fighter’s traditional business end. This is formidable firepower, but the Hurricane still shines best with a dual crew: the pilot can handle the demanding maneuvers and situational awareness required for survival and can also keep an eye towards the resource management that is so critical to this ship (see also below, re: power management) while the gunner makes sure the enemy always has plenty to think about. Meanwhile, the gunner gets some simple access to multi-crew features, helping out with radar and missile locks. Have a plan going in, work as a team, and the two crew become a force of nature. This ship is all about staggering performance potential but with significant risk management as the price of entry.

What sets the Hurricane apart from other fighters such as the Hornet, Buccaneer, Gladius, and Sabre? Does it have any particular strengths or weaknesses that might make someone choose one over the other?

The Hornet is a boxer, happy to trade slugs and rely on grit and stamina to be the one left standing. The Buccaneer would prefer to let the opponent take all the beating. The Sabre likes to strike from the shadows. The Gladius likes to chase its prey. Meanwhile, the Hurricane believes that life is short, combat should be shorter: pick a target, eliminate it before it hurts you, repeat.

As with any ship, the eventual goal is to let you customize your loadouts to your liking based on your ship’s available capabilities and budget. While you can run an energy loadout, there is a definite slant towards ballistics with the Hurricane, as the small powerplant means there isn’t a ton of power to go around – this ship is optimized for decisive action, not for protracted fights. The turret is great for strafing runs on planetside targets, blasting medium-sized targets gunship-style while the pilot’s attention is focused elsewhere, or suppressing the enemy while the pilot navigates asteroid alleys and debris fields.

How can the Hurricane be a heavy fighter when it is smaller and lighter than any of the current medium fighters and most of the light fighters?

The Hurricane punches well outside of its weight class, that’s for sure. The slight chassis may read like a light fighter, but in tactical terms that label doesn’t fit at all. The Hurricane is not meant to be flown like a light fighter, if by light fighter you’re going to imply ‘dogfighter’. Pitting a Hurricane against a Gladius or Avenger is certainly feasible, but it is an unnecessary risk – ‘overwhelming force’ is the entire focus of the ship, and it is meant to be used against heavily fortified ships and outposts, especially the kind that an average fighter’s loadout might struggle to hurt without risky prolonged fire and the exposure that comes with it. In-game and historically, it’s also worth remembering that the Hurricane’s design originally hails from another time, and for its time it was certainly pretty heavy.

Given that the Hurricane is a “glass hammer,” can we expect the pilot and gunner to have ejection seats?

Yes, both pilot and gunner seats come with ejection features. While Anvil may not have designed the Hurricane initially – that credit belongs to Casse Aerospace – Anvil’s design philosophy includes pilot survivability. Anvil is proud of their history of aces, and know better than anyone that the biggest fish in the sea got that way by outliving their equipment – after all, no one stays undefeated forever.

What is the operational range of the Hurricane? On a scale from Gladius to Vanguard?

The Hurricane is more mid-range. The stark accommodations make for an uncomfortable trip, but it has fuel enough to find its way to trouble. The quantum drive and jump module mean it is capable of venturing off on its own, but it is closer in range to the Gladius than the Vanguard. Operationally, it isn’t a long-range, deep space fighter like the Vanguard – in the Tevarin War, the Hurricane was deployed to exploit breaches in Tevarin Phalanx shields, so they usually weren’t operating alone. In most cases they would have needed to have legs only about as long as the rest of the fighters, bombers, or support ships they were flying with, and the Hurricane’s extreme risk-reward focus doesn’t quite fit the profile for long-range patrol.

How advanced are we expecting the power generator to be on this ship? Will there be a lot of room for upgrading it if it’s low end, or can we not expect to squeeze much more out of the slot than the base generator?

The factory loadout for the Hurricane allows it to achieve solid functionality, but there’s definitely room to customize. By 30th century standards, the ship is understocked in its power plant (remember, its original design is from another time in history), which means you’ll need to make frequent choices in power management between supplying power to thrusters, shields, or weapons, moreso than with “contemporary” fighter designs that inherently have a better balance in terms of pilot workload. Maintaining ballistics on your hardpoints will decrease the energy requirements, as will upgrading the power plant itself. You will have enough power to run energy weapons, but it can start to really eat into that precious resource which you’ll be wanting for defense and engagement/disengagement, making those power management decisions all the more critical in finding success. In general, we expect that running ballistic weapons in a Hurricane will be the typical loadout of choice, but we also anticipate no end of ingenuity from our players. We’re interested in seeing what you can do with the ship!

What’s the best tactic for the Hurricane to use in a dogfight? Zoom & Boom? Turning fight? Other?

Alone, I’d expect Hurricane pilots to favor attack runs and then kiting through tricky obstacles whenever available. When you are alone, it’s relatively difficult to isolate a distracted target, so a solo pilot is well-advised to pick his or her engagements carefully. In groups, I’d expect the preference to fall more towards alternating waves of boom and zoom, with a much heavier emphasis on team or group tactics, including weaves, wagon wheels, flexible formations, or other pack tactics designed to expose anyone who would threaten one Hurricane to devastating focused fire from the others.

The Hurricane concept sale will run through Monday, March 6, 2017. Standard and warbond versions are available, as are two packs that include a small discount on other ship types in Anvil’s expanding line-up. The loaner ship for the Hurricane will be the Anvil F7C-M Super Hornet. And if you want to know more? Around the Verse will feature the Hurricane in an upcoming ‘Ship Shape’ segment.

The Hurricane is being offered for the first time as a limited concept sale. This means that the ship design meets our specifications, but it is not yet ready to display in your Hangar, fight in Arena Commander, or fly in the Alpha. The sale includes Lifetime Insurance on the ship hull and a pair of decorative items for your Hangar. A future patch will add a Hurricane poster and then, once the in-game model is finished, you will also be given an in-game Hurricane mini ship model! Once this deal expires, the ship price will increase and not include Lifetime Insurance or these extras.

Additionally, please note that all decorative ‘flare’ items will also be available to acquire in the finished game world. Also, while the Hurricane will be entering the ship pipeline now, it will ultimately be released after other concept ships have been completed. The goal is to make additional ships available that give players a different experience rather than a particular advantage when the persistent universe launches.