“It’s the first push that gets me every time. That moment where the landing gear breaks contact with the ground. Where the docking collar releases. It’s the moment that I know that this, whatever’s going to happen, is about to begin. Maybe this trip’ll be a bust… maybe it’ll change the course of Human history. And that… that feeling right there… it’s everything.” 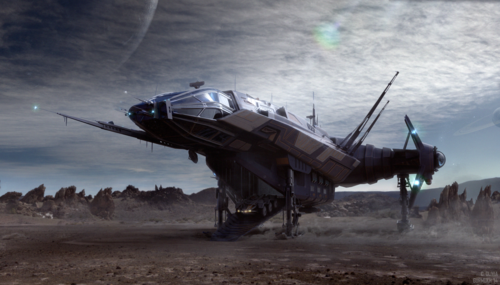 We’re celebrating Star Citizen’s birthday with a huge ship sale! Each day for the next week, we’re bringing back a selection of fan favorite limited edition ships to the pledge store, so anyone interested can pick up what they might have missed. Today, the focus is on our explorers, including the mighty Carrack and the Endeavor science platform. For anyone who wants it all, an explorer master pack is also available!

A variety of new ships will be available all week; they are listed below.

Remember: we are offering these pledge ships to help fund Star Citizen’s development. The funding generated by sales such as this go directly to the game’s ongoing production. Concept ships will be available for in-game credits in the final universe, and they are not required to start the game.

Musashi Industrial & Starflight Concern is proud to present the Endeavor-class research vessel, a fully modular space platform designed to be adapted for a variety of scientific and medical tasks. Initially developed as a floating laboratory, the MISC Endeavor can be outfitted for everything from spatial telescopy to use as mobile hospital.

The Anvil Carrack features reinforced fuel tanks for long-duration flight, an advanced jump drive, and a dedicated computer core for jump charting operations. Originally a military exclusive, the Carrack is now available for civilian use. On-board accommodations include crew medical and repair facilities, and a mapping-oriented sensor suite.

A so-called “flying toolbox,” the Crucible is Anvil Aerospace’s first dedicated repair ship. Featuring a rotating control bridge and a detachable pressurized workspace, the Crucible is a versatile mobile garage equipped with repair arms, a drone operation center and all the equipment needed to overhaul a damaged craft back into fighting shape.

The Crucible, our penultimate Wave Four concept ship, is now available! Designed by the legendary Ryan Church, this repair ship is just the thing for keeping your fleet up and running. When closed, the detachable workshop allows crews to repair single seat fighters internally. When open, the Crucible can use its remote arms to attach and repair larger craft! You can learn more about the Crucible here, and Star Citizen’s overall repair mechanic here.

Star Citizen Alpha 2.0 will see the addition of flyable variants for the Aegis Dynamics Avenger! The base Avenger available today is now the Stalker, designed with the needs of bounty hunters in mind. A basic Titan cargo ship and an advanced e-warfare Warlock are also available… and all three will be available for combat in Star Citizen’s next patch!

The Titan and Stalker are permanent additions to the pledge store, the Warlock will be on sale through the end of the anniversary sale (Sunday, November 29th.) Please note that these variants will be available as separate modules in the future. The initial release of Star Citizen Alpha 2.0 does not allow changing modules, so we are offering them as distinct, playable ships first. We would encourage you to CCU to the Avenger you’re most interested in trying rather than picking up all three!

Lacking the Prisoner Cells of the Stalker or the EMP Generator of the Warlock, the Titan’s hold is free to carry cargo. Couple that available space with the Avenger’s tried and true combat abilities and you’ve got a light cargo hauler that’s more than capable of handling itself in a fight.

Initially designed as Aegis’ frontline carrier ship for the military, the Avenger Stalker took a different path, ultimately having a long and storied career as the standard patrol craft of the UEE Advocacy. Utilizing its cargo hold for prisoner transport, the Avenger features a sturdy, reliable hull and the capacity for larger-than-expected engine mounts.

The Avenger Warlock was built towards a single design philosophy: stop ships, don’t destroy them. Probably the closest to a non-lethal fighter, the Warlock is outfitted with a Behring REP-8 EMP Generator, capable of emitting a powerful electromagnetic wave to disable any electronics unfortunate enough to be within the blast radius.

If you’re looking for something a little more agile, blaze among the stars with Kruger Intergalactic’s P-72 Archimedes. Whether for added security, exploring a system or simply the joy of flying, the Archimedes is the perfect companion snub craft. Featuring an extra intake and a lighter hull than its sister ship, the Archimedes delivers exceptional handling and boost capabilities in a sleek package you’ll want along for the ride.

The A3G Vanguard is the United Empire of Earth’s dedicated deep space fighter. Initially developed as a bomber-destroyer, the Vanguard is a hard-charging bulldog of a ship which features extensive forward-mounted weaponry designed to tear through the shields and armor of other spacecraft. Four high-caliber forward laser cannons and a massive central Gatling gun give the Vanguard an unprecedented amount of sheer striking power. So-named because their multiple-jump range allows them to form the forefront of any military expedition, Vanguard have seen extensive service against the Vanduul.

We’re proud to announce that the Aegis Vanguard will be available as hangar-ready in Star Citizen Alpha 2.0! Going forward, we intend to make ships hangar ready earlier in the process than previously allowed, starting during their advanced greybox phase. The Vanguard will be the first of these ships! In its honor, we’re making all three variants and their BUK options available again this week.

We don’t just want existing players to enjoy the anniversary, we want to introduce Star Citizen to new players! As a result, we’re offering a limited number of discounted $ 30 packages each day, first come first serve (1,000 per day.) These packages offer the full Star Citizen experience, including an Aurora starter ship and a copy of the Squadron 42 single player adventure. You won’t find a better deal anywhere in the ‘Verse, so pick up a copy for a friend today!

Star Citizen physical merchandise is also on sale! For the next week, Constellation models are now $ 80, Arena Commander t-shirts are on deep discount and all other in-stock merchandise is 20% off.

We’re making a large number of our older ships available for those who missed out, want to upgrade an existing package or simply want to expand their fleets. We will be presenting these ships over the course of the next week in a series of role-based theme days, listed below. From armored explorers to lumbering transports to alien traders, there’s something for everyone! All existing ships will be offered with three year insurance in honor of our third birthday. Each day will also include a discounted ‘fleet pack’ in the style of the Armada Pack available during CitizenCon. Don’t want to wait around to switch to your favorite ship? All ships will be available at once during the end of the sale, from Friday, November 27th to Sunday, November 29th.

From Friday through Sunday, all ships previously available during this sale will return. Pick up your favorite as soon as it appears, or wait until the finale to make your choice!