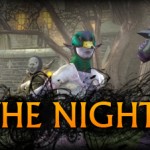 Recently I’ve received a few e-mails and questions about the amazing wardrobe contest that we’re running in tandem with Trion. One of the primary concerns is how the contest will be judged and whether or not there’s a possibility for favouritism towards users or a bias against users.

A lot of the judging depends on the scale of the submissions. Seeing as there are already over 200 and it’s only day two this is going to take some significant time to narrow it down – but I’ll explain how the process is going to work:

All screenshots are dumped into a directory structure that has nothing to do with the applicant. We’re going to take all of the screenshots once it is closed and go through them one by one – we’ll really have no idea who they belong to short of if their name is in the screenshot. All screenshots will be filtered through each judges “top” lists and then compared against each judge. This process will help us narrow it down from the possible thousand(s) of submissions down to a smaller number where we can group up and discuss them objectively.

No single person is going to have the option to push a Wardrobe through to the top 10. On the flip side – no single judge will have the ability to prevent a wardrobe from making it to the top 10. Once the top 10 are selected – it will be up to the users of the live stream to vote who gets the top 3 prizes. The judges are not finalized yet but at this point it will be myself (Qube) and Lumia (who does all of the Wardrobe posts) representing RiftScene, and the two folks representing Trion are not known to me at this exact moment.

Hopefully that clears things up a bit for you guys and gives you a bit more confidence to put the final touches on your wardrobes and submit them to the contest. A lot of great ones so far, and hopefully a lot more submissions to come!