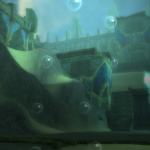 Apologies for not posting this sooner: MikeD posted on the PTS Forums welcoming players to come and play some of the content that will be opening up underwater just off Ember Isle. This area was previewed within my Underwater Areas post, you can check out the underwater zones to the west of Ember Isle yourself on live now. Tomorrow starting at 3PM PST it will be filled with quests, carnages, Rifts and even a zone event will be spawned sometime during the PTS test.

We’d like to invite you guys to join us for a playtest of the new Ember Isle content coming in patch 2.5.Time: 10/29 3pm PST

The next expansion will have a number of underwater content areas, so one goal of this new Ember Isle content is to identify and address issues that will make swimming more enjoyable.Feel free to post feedback or bug reports. Thanks!

It will occur October 29th at 3PM Pacific Standard Time I assume for at least an hour or maybe more; if you’re able to login and participate you’ll be able to take a sneak peek at a lot of the content that will become available after RIFT 2.5 is released, not to mention experience the first full fledged underwater game play in RIFT.

If you have never used the PTS before, please see Cupcakes Guide to Setting up the RIFT PTS to get started and come out for this testing and others that happen from time to time.