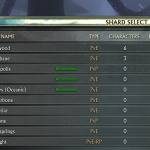 Announced on the RIFT Community Page, next week we will see the merger and unification of Shards within their regions on Wednesday October 23rd for NA Shards and Thursday, October 24th for EU Shards. This is awesome for us players as it allows us to queue up with more people across the entire shard and complete random dungeons together as well as increase the players available to annihilate each other in Warfronts. This move is also the beginning of a larger plan to enable customers from all over the world to experience the same content together, simultaneously. While one player is seeing everything in French and party member is seeing it all in German, the devs at Trion are very happy and excited about this. Read on for all details posted by dahanese on the RIFT Forums or click the source link for the full post.

Hey guys – A blog post from Daglar just went up on the RIFT site about shard unification happening next week and larger internalization plans we have a bit further down the road. I’ll quote it here for you as well as leave a link!
Greetings Ascended,Today I’m excited to announce a change for the better for RIFT!Some of you have been asking for it, and we’ve been working towards solutions to get us there: A unified universe of RIFT shards per region.Why is this change a good thing for everyone that plays RIFT?First, it means that the pool of people that you can play with is even bigger. Random dungeons will once again be random across the entire population of the region, warfronts will have a larger pool to draw from for match making, Conquest will have more folks to slaughter, and it will be even easier to visit your friends on other servers!Second, this effort is part of something even bigger for the future that we’d like to announce for the first time today: Truly international worlds for RIFT! Our engineers have hard at work on a longer term project that we’re happy to talk about beginning right now It’s always been a dream of ours to have our architecture seamlessly support multiple languages.Want to play on a shard, but experience the content in French while your friend experiences the content in German? We’ll support that! Our goal has always been to give users more ways to play together whenever possible – Through gameplay, through visiting, and now languages through the server architectures themselves.A lot of you have been asking for this, and we’re excited to finally be able to talk about it with you. We hope you’re as excited as we are about this future for RIFT’s technology.The first step in getting there is to reorder the existing capacity, in which you’ll see some changes to the number of visible shards. This is a departure from what we’ve done by marking shards as Trial as we have in the past.Friends and guilds will seamlessly be together on the target shard, and pre-existing communities will stay intact. Returning users will also simply return to a shard that is highly populated instead of landing a trial shard and not knowing where to go.The following transitions will be made automatically with no input or special actions required:Wednesday October 23rd (North America)Thursday October 24th (Europe)North AmericaNecropolis users will be migrated to Seastone.Shatterbone users will be migrated to Wolfsbane.Threesprings users will be migrated to Deepwood.EuropeVolan users will be migrated to BloodironBlightweald users will be migrated to GelidraArgent users will be migrated to ZavielNomi users will be migrated to BrisesolWe look forward to a new world of improved international support for our dedicated audience of RIFT players everywhere across the globe!Bill “Daglar” FisherGame DirectorFAQ:What if my name is taken on the shard that I’m moving too?If you are transferred to a shard where your name is taken, you will be offered a free name change.What if my guild name is taken on the destination shard?Guilds that have conflicting names will have ! appended to them. We will be offering one free guild rename to any guild with an ! point in the game. Please have an officer of the guild enter a support ticket to claim this.When is this happening?North America: Wednesday October 23rd during the normally scheduled downtime.Europe: Thursday October 24th during the normally scheduled downtime.Join the discussion now on our forums!

The blog is also here: http://community.riftgame.com/?p=2873