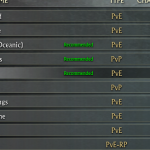 The effected Shards, and which will be merged into which, is detailed here, if you have characters on any of these shards you will want to read this info and take steps to prepare for October 23rd. Read on to find out what you should be aware of and the things you’ll need to do before the Shard Unification on October 23rd.

It’s been announced on the RIFT Community page today that characters having not been logged into in a long while, will have their names purged in order to make more names available for those that will have conflicts when the Shards are merged on Wednesday, October 23rd. There was also a post from dahanese noting that Players will be receiving E-mails from Trion with steps to take if they are affected by the mergers, and Characters coming from another Shard will have a title to show where they came from. For those of you wishing to keep the name of a toon but having logged into them for quite some time, log in to them before the October 23rd merger if you want to save it. Personally I would also like to note that I think, for obvious reasons, you should only save a name if you have some intention of using that toon in the next short time. I may delete a couple toons I have as simple name holders just on the off chance I may use them. If I can make a name available for someone else that wants to be called that while they are playing, that’s better for everyone.

Hey guys, We’ve been listening to a lot of your feedback these past couple days and I have some updates for you. On Wednesday, October 23rd we are going to be resetting inactive character names to free them up for players headed onto new shards. If one of your characters is going to be impacted by this change, you’ll be getting an email from us in the next day or two with instructions. If you are one of these inactive characters and want to keep your name, you’ll just need to log in with that character before October 23rd.I also want to let you guys know that everyone who is transferring off a shard that is part of next week’s unification will be receiving a title denoting where they previously hailed from. And as a final note: I want to personally thank everyone who has talked with me over the past couple days. I’ve had some great conversations and your words have been invaluable to both me and the entire team.

What If I have Toons on Both Shards?

There have been other concerns one of which has been about what happens with accounts where there are many different characters on each and they’re being merged. Well Pithos takes time from his vacation to address and answer these questions. He talks about the maximum number of characters the client can handle, 12, on one Shard and what will happen if you have more than 12 on a Shard after the merger. Basically if you have more than 6 toons on both Shards that will get merged, you will need to transfer the toons you pick onto other Shards so they won’t become effectively ‘hidden’ until you do move characters off the Shard with more than 12.

No personal action will be required during this transition, other than the case with over max character numbers, so all the items in your mailbox/bank/guild bank, all of it will be transferred without you needing to clear them out or transfer them yourself before the merger. Your bids and auctions within the Auction House will also be preserved so you will not have to cancel Auctions before the transition occurs on October 23rd.

Pithos also talks a little bit about how they are developing an Auction House where players can search for items in any language and have results be accurate and show items that have been put into the Auction House from someone using a different language. This feature should be seen and available for RIFT 2.5 and we’re told to expect it.

Click the source link below and read on for more info.

Hi all,I’ll keep this brief since I’m supposed to be on vacation (my first real vacation since starting at Trion!), but I can quickly address a few technical concerns.If you have more characters on a merged shard than you have slots for, you will be able to access them all, as long as you have 12 of fewer characters. Our character select screen only supports 12 characters, so if you are in the small percentage of players who will end up with more than 12 characters after a merge takes place, you will need to delete or transfer one of the visible 12 in order to access the hidden characters. Note: To create a new character, you will have to get below the maximum your account allows. Example: If my account has 7 slots, and I have 7 characters on each shard, after the merge, 12 of my characters will be visible, 2 will be hidden. I can delete one character and transfer one character elsewhere, and now I will have 12 visible again. However, I would need to delete or transfer 6 more characters (bringing me down to 6) before I could create another character on the shard.Guilds do not have to empty their guild banks as part of the merge. If you simply wait until it occurs, and then log in, you’ll have your guild just as it is now, on the new shard. Transfers from trial shards in the past have been difficult due to the need to empty out the guild bank – 5 tabs and all those slots is quite a bit of space! If you’re content to wait until the merge occurs, you won’t have to deal with any of that hassle.Auctions do not have to be ended when as part of the merge. Whatever auctions you have running will continue running on the target shard of the merge, and will end normally.Mail will transfer as well. You do not need to empty out your mailbox, all your mail will be waiting for you in your mailbox on the target shard of the merge. You are, of course, free to transfer anywhere (within the region) you want, before or after the merge occurs, using our existing *FREE* character transfers. And for some people… There are some of you who have always wanted an exclamation point at the end of your guild name… Well… Now’s your chance! Lastly – for people in Europe – I have good news about the auction house. This past Friday, one of our engineers demoed to me his upcoming Auction House changes to deal with multiple languages. He had three clients logged in to a single shard – one running in English, one running in French, and one running in German. Each of them could post items to the same auction house, and search for items using their own language – and all the posted items would show up. He’s not quite done yet (auction result emails were still in English for one thing!) but he’s on track for and very close to making the Auction House work correctly for everyone on a shard, regardless of the language they’re using. Expect this in 2.5.