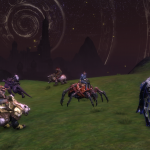 Communication about PVP conditions and changes between TRION and PVP Players, over the last while especially, has been greatly encouraged and the creators at TRION want to build the PVP system so that everyone will enjoy it and want to do more. Some hopes and dreams for where PVP content may go in the future from Daglar’s perspective have surfaced on the RIFT Forums. Some ideas of his include 5v5 Deathmatches and unique player portraits for targets while in a match. A feature talked about but not seen yet is PVP Dimensions, heavily supported by the PVP community as something that would be fun and involving.

While this feature was hoped by PVP players to be seen included with the RIFT 2.4: Beyond Infinity patch, unfortunately it was not ever associated to an specific Patch release and even when it is implemented it will be done so in a very strategic manner. The first we see of PVP Dimensions, when the time comes, it has been stressed by Daglar that at first it would be a very simple experience and build from there depending on the number of players actually participating and feedback etc… Some words from Daglar –

I’m not at all stressed about people being upset about not having PvP dimensions right now. I made it very clear that there is no game update number attached to the feature, and when it gets done it will be made available.

The initial implementation is intended very specifically to be death match and to allow you to scale the team size to your liking and set some of the basic rules of the match. There won’t be a queue for it out of the box – if the feature ends up being successful, we will find a way to build on it.

There will be no favor/prestige awarded for these matches either – it is very specifically built to help facilitate player competition and creativity. I’m sure we’ll help sponser some contests etc to help drive folks into these however! [-Daglar]

Many, if not most players, consider Conquest to be a complete and utter failure by forcing them to maintain Conquest Power, which would sometimes simply evaporate with no reason, along with a plethora of other things Players have issues with. While Daglar does not share the opinion that Conquest was a complete failure, he does point out that has not meet expectations. Daglar and the team at TRION is discussing how to revamp the conditions of Conquest, adding new maps, and also taking away Extractors are just a few of the ideas talked about here.

While I do view Conquest as not as good as I’d like it to be, I disagree with the sentiment that it is a flop. If it was a complete flop, no one would do it, and there certainly wouldn’t be arguments on the forums regarding corpse explosion, premades in CQ, and other drama

It can be better. It should be better. I would have loved to get another map out earlier as well. We’ve started laying the groundwork for the next version of CQ – in fact we’ve got a couple of layouts we are persueing. As always I won’t promise a release date – but I’d /like/ to get one out in 2.5.

Something that isn’t as player facing is just how the back end of the CQ stuff works. The system was built to not be as extensible as some of our other scripting. Pithos recently took some of his own free time (a while back actually), and extended the functionality so we can actually change up the game mode more.

Modifying the existing Stillmoor map is unlikely at this point in time as it would be more of a rats nest to update it than to simply build a new one with a new ruleset. The other thing to consider about Conquest is the intent from our end is to not heavily tax our art team and require them to build new areas. That was actually the driving reason why the map takes place in Stillmoor. By doing this, we can actually continue to produce the content we need to produce going forward (like 3.0).

For the next round of CQ we are looking at using the following mechanics:

Resources exist in the world – either in a few set locations, or randomly spawning locations.
Resources are carry objects – like you are used to, and may be taken from enemies.

Nodes exist in the world – either owned by teams or general nodes.

Resources must be taken to a node and successfully channeled/used on the node in order to increment your teams points.

One of the reportedly worse aspects of PVP’ing is having to deal with the way the current matchmaking system works and there are efforts being made by TRION engineers to extrapolate, from tracked statistics over the last number of months, and build a new matchmaking system.

Something we are aiming for and have been aiming for is a redo of how our match making system works. Several months ago an engineer actually started tracking various statistics and ratings to lay the groundwork for the new system.

Under the new system users will be placed onto teams based on their rating and the system will attempt to fill in slots evenly based on ratings. In effect, mercenary will be in effect at all times – your base faction is not considered at all – it is effectively Red Vs Blue – though we are not going to re-theme all warfronts or re-script them – the Mercenary message will still pop up etc. [-Daglar]

Having some sort of, at least minimalistic, rewards for achieving certain milestones is pretty huge when it comes to motivation and maintaining a style of play. If you don’t see yourself gaining a specific status or class, or other unique ways to represent yourself and display a message to others, then what’s the point, right? This element is believed to be somewhat left out and players feel as though there really isn’t much reward to PVPing considering how much work is involved. Giving a player a title to stride towards or a specific number to aim at offer a lot of incentive and something they can see change after each match. To bring this element into PVP environments there are very primitive talks happening about developing a 5v5 Player competitive arena that would track statistics for participants and possibly some unique portraits or custom titles.

Ultra caveat for what I’m about to say next – this is in no way a binding contract and I’m most certainly not telling you a game update number for this but I am actively talking to engineers about the following:

5v5 – Getting code support so that we can in fact set a warfront to 5 v 5 only mode and not in the random queue. You must be 5 players, you must be the leader of the 5 players to enter the queue. 5 v 5 mode does not award favor and prestige. 5 v 5 mode tracks a rating on the back end and there might be some potential to give either a title or special border to the top percentage of users. This mode would not be active all the time. It would start as a special event / contest. [-Daglar]

Yeah pretty much this. Give me a bright colored bar around my name, or player portrait, some kind of special graphic on it that’s noticeable and I would be extremely happy. Make sure there’s no other way to get such a thing. Having these only for the top % of people who did the 5v5 queue’s, or the contest (I have been dying for Trion to finally do something like this) is a huge recipe for successful competitive pvp. Imagine instead of “weekend warfronts” every Weekend was a 5v5 Tournament with fluff prizes you could only get doing the tournament? I’d sub for another year. Damn, even if it was once a month with a huge prize, and Trion promoted it, that’d be awesome and would really elevate the skill level of the playerbase IMO

That’s the sort of direction I want to take things into if we do get to the 5v5 queue. It isn’t about another gear grind – it is intended to be about going out and showing folks who is best – and changing your target portrait for the top percentages is exactly one of the things we discussed. As I stated I also would want to run these sorts of things as limited time run things to begin with – not an always on feature. But remember dimension PvP and 5 v 5 queue are different things. One is not the other. ~Daglar