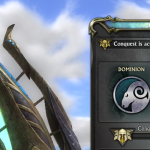 Come join Trion’s Devs and players on the PTS as they observe battle ensuing within the newly created Conquest map Steppes of Infinity this Friday, October 18th. Announced by Daglar on the RIFT Dev forums it will be happening at 2:30 PM PST and those that come out and participate will be granted the exlusive title “Savage Tester”. On top of that, if it weren’t enough, testing players will be receiving an unspecified amount of loyalty for their efforts as long as they are beyond the minimum loyalty threshold. The participants will also automatically be entered in a draw to win a choice out of a few premium exclusive mounts including a Ruby Ki-Rin or any Hellbug mount they want.

Players will have to capture charges in Fort Brevo and then gain points by using them on the extractors in Fort Antapo and visa versa. A secondary way in which players can gain points for their team is by upgrading random Foci, which spawn around the map, with your Planar ability.

If you haven’t gone on PTS before and would like to know how, just head over to the PTS Introduction Page on the RIFT Forums. This should be pretty exciting and draw a number of players to join in and test the new area, get the PTS Client and get used to the new Conquest: Steppes of Infinity as it is on there now. Let us know if you’re going to be there this Friday for your sweet rewards and a chance for a mount!

The rough draft for the new game mode is up on PTS and needs its tires kicked this coming Friday at 2:30 PM PST.Those that come out and participate will be eligible to receive the PvP testing title: Savage Tester.Testers will also receive a moderate amount of loyalty if they have already passed the minimum loyalty threshold.Everyone that shows up in the testing logs during the allotted time will also be entered in a random drawing where 5 lucky winners will receive either a Ruby Ki-Rin or a Hellbug of their choice.Reminder: This is a rough draft / first playable so things are very likely to change!Objectives:• Capture charges in Fort Brevo and use them on extractors in Fort Antapo to gain points (And the reverse!)• Use your planar upgrading abilities on a variety of randomly spawning Foci to gain points for your team.