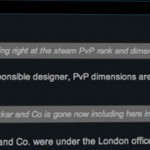 The new German CM, Kharon, was a little quick on the draw posting this information to the German forums today:

There he’s talking about PvP enabled Dimensions and mentions the PvP Rank cap increase to 90 will be released September 18th which is part of patch 2.4.

In addition to the above in terms of the PvP Rank cap increase here is some (but not all) of the highlights of the coming patch (next week!):

Since it isn’t really released in an “official” format, I wouldn’t get my hopes up too high, though it has been said time and time again that it is coming in September so worst case scenario it would have to be within the next two weeks based on the Wednesday patch cycle.

Special thanks to our reader bonomaus for tipping us off to the german forum post!