For quite a few years now, World of Warcraft players have grumbled every time WoW‘s anniversary event pops up in November. Those of us who have been around since 2009 and before remember receiving cool pets like the Onyxian Whelpling and the Baby Blizzard Bear. It’s been a good few years since Blizzard’s offered its playerbase cool rewards for WoW‘s anniversary, but fear not– this year will be a big one!

Just announced yesterday, Blizzard is already gearing up for World of Warcraft‘s 10th anniversary. As part of the event festivities, we’re going back in time a bit to nostalgia land. Well, Molten Core and Hillsbrad Foothills to be exact. Players will be able to take part in a special battleground taking us back in time to the days when world PvP rocked our WoW-sphere in Tarren Mill vs. Southshore: The Rematch. Tarren Mill vs. Southshore will be a deathmatch-type battleground with a clearly-defined victor (unlike the original world PvP matches!).

We’ll also be getting a 40-man raid finder version of Molten Core to explore. Why go back to Molten Core at max level? Achievements, of course, and a Core Hound mount.

Anyone who logs in during the 10th anniversary event will also receive this little guy: 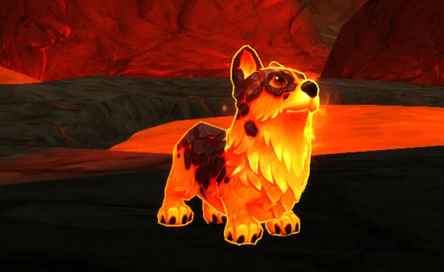 D’awww. While RIFT will always be my go-to game for all things involving corgis, this little, molten fellow is really quite adorable.

The post World of Warcraft’s Going Old School for its 10th Anniversary appeared first on JunkiesNation.