One of the most prominent concerns players have during every MMORPG’s post-launch period is questioning how developers will deal with averaging out the game’s population. It’s all familiar territory for those of us who have been through multiple MMO launches. There’s always that launch period rush where players eagerly buy the game, take time off school/work, and play like a bunch of caffeine-crazed, well, gamers. We often face queues, server lag, and massive amounts of players fighting over mobs.

Then there’s that period where the developers usually add a bunch of new servers and encourage us to roll on those servers. All goes well for about a month or two. Finally, after the hype-dust has a chance to settle, we ourselves settle into a comfortable spot where we wait to see who will stick around in the long run. Eventually, some of the servers inevitably end up rather empty while others flourish. Some players pay to transfer over to the high population servers while others remain on the empty-ish servers. The empty-ish servers become even emptier. And after that, all that’s left is for the stragglers to transfer off or wait and hope for a server merge.

This cycle repeats itself so often, really, that none of us should have been surprised to see that WildStar‘s just beginning to enter that final phase currently on some servers. It’s nice to hope that any game you’re heavily invested in won’t go the route of unfortunate population loss, but there’s a simple fact– with so many other gaming choices and that season called summer over here in the states (it’s warm outside– or so I’ve been told, anyway)– any new MMORPG is bound to experience a decline in overall population during the first few months of a post-launch period.

Things are shiny when they’re new, but they don’t always stay so shiny. Gamers also play an MMORPG considerably less when they’ve leveled to endgame and have settled into more of a routine with their gaming schedule. This population drop-off has nothing to do with WildStar‘s success necessarily, but it does factor into many new player receptions about the game.

In most cases the early leveling areas suffer most from post-launch drop-offs, and these are the areas that new players who buy WildStar will first see. If these areas are like ghost towns, well, it may be difficult to encourage those players to stick around. Server population matters– especially in a group content-focused game where PUGs aren’t always encouraged. If new players are discouraged from sticking around and hitting endgame, then the game, overall, starts to suffer significantly.

Have We Entered Ghost Town Land? 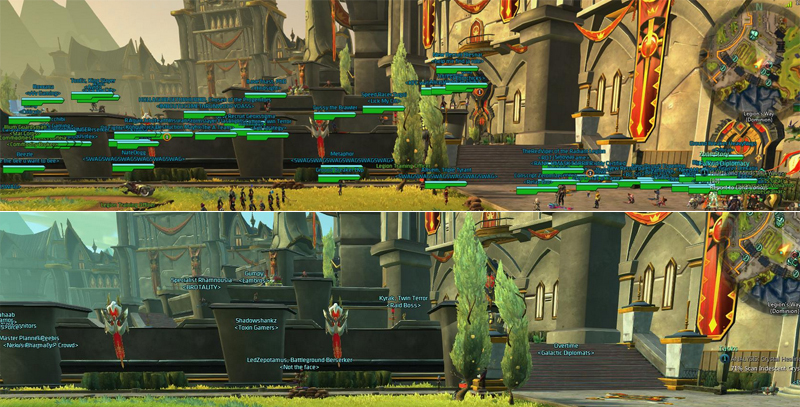 So, enough of the “if”s. Is WildStar at that point yet? Do we need server merges on our lower populated servers? The EU servers are suffering noticeably more than the NA servers, it would seem, but even on a few of the NA servers the leveling areas have become quite quiet lately. The issue is severe enough according to many players that we’ve seen a pretty significant increase of forum threads on the official forums about possible merges.

This is the latest thread which was just closed yesterday after reaching 29 pages. The only Carbine reply in the thread was given when the thread was closed, stating that the development team is keeping a close eye on the situation and will let the community know if any decisions are reached.

It’s definitely good to see that Carbine is keeping an eye on the situation, but many members of the community are still questioning the decision to play the “wait and see” card. Many a development team played that card in other games and caused large portions of a game’s community to leave in frustration. The situation with SWTOR is often brought up as an example. SWTOR players waited approximately 7 months before server merges were finalized, and BioWare went about it in a PR-filled, stalled process which left a great deal of players disappointed. Players understandably dread the same thing happening here.

The two images below the subheader above are from the aforementioned thread where one player compared NA’s most populated PvP server (Pergo) with one of NA’s least populated PvP servers (Warbringer) during peak hours. There’s an obvious difference between the two shots, but there are a few things to remember:

In truth, gauging the true severity of the population drop-off is rather difficult for us players. All we essentially have are screenshots like the ones above as well as personal experience to go by. There also, of course, is this screen to go by:

This screenshot wasn’t taken during peak hours, but even during peak hours none of the population totals go above “Medium” these days. For an MMORPG veteran who’s concerned about population drop-offs, a full list of “Low” servers isn’t that encouraging. But it does bring up one point that needs to be reiterated during every forum topic on the subject: A server registering as “Low” or “Medium” in WildStar likely means an entirely different population number than the scaling systems we’re used to seeing in other games.

Cougar talked about this on the official forums back in June. We don’t know exact numbers, of course, but a “Low” population in WildStar could even mean the same number-wise as a “Medium” population in a game like World of Warcraft. WildStar‘s servers hold more players which skews the scaling system we’re used to seeing.

A player on Reddit did a bunch of research using a population census addon and speculated that WildStar‘s servers might hold up to 12,000 players each. That’s a pretty large number. Depending on the scaling system used, that could mean that a “Low” population total actually comes out to around 3,000-4,000 players or so (using the most basic of math systems). That certainly doesn’t seem very shabby. If those numbers are close to accurate then most servers are probably not in need of merging currently, but a few of the especially low servers may be close.

Unfortunately, all we’re left with is “seem”s and “may be”s and our own personal experiences. While I’m glad Carbine is keeping close tabs on our populations, I can’t help but think more communication would be extremely useful during this time when more than a few players are beginning to feel a little on-edge about their server’s population.

If and when Carbine does decide to merge servers, there are a few options here. They could merge the lowest populated servers together or offer free transfers to those servers to encourage players to balance out populations naturally. I’ll always be a strong fan of RIFT‘s open-for-all free transfer system, but that type of system isn’t practical for all games presumably. The phasing/instance cap could also be lifted which would help.

The loss of player names is always one of the huge drawbacks of forced merging which is why voluntary transfers would work better, but alternatively a system that makes use of “Name@Server” configurations could also work. Carbine has a lot of options here (a single megaserver will never be an option for WildStar, unfortunately– this was stated during one of the first live streams) when and if the time comes for merges, but as always, the process begins with communication.

With raiding and teamwork-encouraged endgame content being such a major draw for WildStar, Carbine needs to remember that players need a healthy population in order to take part in such group activities. As I mentioned last week, the route of attunements and 40-man raids was definitely a risk on the behalf of WildStar‘s development team (and not necessarily a bad one– quite the opposite I’d argue), but in order to turn that risk into something positive, a healthy population and access to that population must be high priorities. It may not be time for server merges just yet, but if and when it is time, they need to happen ASAP.

The post WildStar: Is it Time for Server Merges? appeared first on JunkiesNation.