This dynamic voxel MMO has evolved through the roof since I first jumped into Alpha way back at Christmas time. I was a little reserved then, not having been drawn to any voxel game beforehand. I thought maybe I was taking my love for Trion games a little too far. I have been blown away more times than I can count ever since then– not only thanks to the Trion team but especially because of the friendly Trove community.

Evolutionary Creativity
Straight off the bat testing Trove came with a “go big or go home” attitude– building such things like “Trove Boy,” and a possible girl friend (previewed above) out in the open world where anyone or anything could smash away at it challenging rapid placement and patience. Being fond of detailed, realistic game building, I found it was a pleasant surprise how creative I could be once I discovered how cubed art worked.

Quickly following the beginning months of testing, open world cornerstones (previewed below) were implemented, then dungeon making took effect along with homeworlds and now clubs.

Building is only a fraction of your adventure in Trove, setting it apart from any other similar games. The game offers three class choices so far with more to come including Knight (feature image), Gunslinger, and Faetrickster (previewed above). 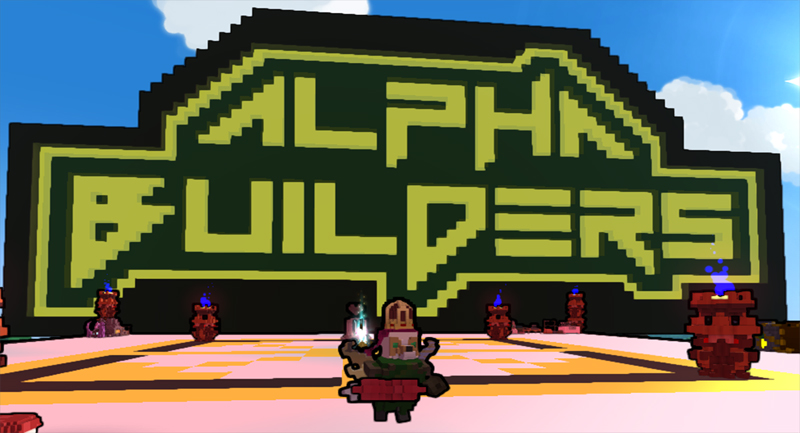 Adventuring out in the world, killing bosses in dungeons, and trading among other players is how you gather weapons. Man, there so many to choose from, but if you want to build or decorate to your imagination’s content you’ll also be killing mobs, mining ore, and breaking down the earth and all its structures for parts. After that you’ll be hunting recipe lairs and smashing pinatas to get recipes in order to use all of your materials.

Crafting in Trove is so engaging. Additional ways to get items to soothe your creative genius multiply every hotfix along with weapon choices. We’ll go into more detail in separate articles including community creations, biomes, block textures, fun parts, mounts, crafting tools, and shadow arena. Plus most importantly– Corgis (Yes, this character has on a corgi mask)! Trove not only has a Corgi mount but also Corgi guns. I’m totally going to go hunt for those in the next few days!

Oh, one parting note. I should mention lava. There will be lava and dragons… so many dragons!

The post Trove: A Building and Combat Adventure Land! appeared first on JunkiesNation.