Some of us are lucky enough to go to San Diego Comic Con. Others, like me, either can’t afford to go or can’t get their hands on a ticket. Either way, that leaves us sitting at home, watching it all unfold through social media and articles on websites. The flurry of events, panels, and shows means that there are tons of things for our home-bound geeks to wish we could have seen. This is my list of the top five things our nerd brethren got to do at SDCC, while we were stuck at home.

A big part of SDCC is spending time sharing the geeky experience with your friends, and the Borderlands: The Pre-Sequel team-based laser tag game was a great way to do this. The Nerdist hosted the event, where teams of twenty-five people fought for supremacy. There were also some good giveaways, as well as the opportunity to play the new Borderlands game!

2. Stephen Colbert moderates The Hobbit: The Battle of the Five Armies panel

The final Hobbit movie is going to be released later this year, which means that this panel was the last hurrah for fans of the Tolkien classic. It went out in style, with Stephen Colbert providing the best part of the event. He gave a thoughtful speech about what Tolkien’s work means to him (and other fans), and reminded us of some of the best parts of being a geek.

Okay, so it wasn’t really Oberyn Martell but Pedro Pascal, the actor who played the character in Season 4. Brewery Ommegang teamed up with HBO to host a tasting of their newest Game of Thrones-themed beer, Valar Morghulis. Fans were treated to Pascal’s bartending skills, took pictures with the star, and were even able to keep the glass! 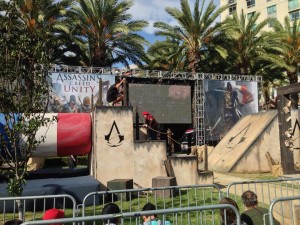 SDCC attendees not only got to play as a vault hunter, but were also provided the opportunity to become an assassin! Ubisoft promoted Assassin’s Creed: Unity by setting up an obstacle course. Those who completed it received an exclusive t-shirt!

5. Camping in line for Hall H 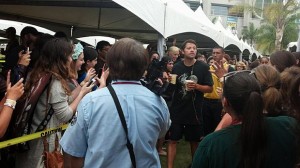 No, seriously, listen to me for a moment. If you ignore the fact that you don’t get a bed, and ignore squabbles over cutting and line-jumping, then you have a pretty great experience. It’s like a camping trip with your fellow nerds! Not only that, but there’s a good chance that those very stars you’re waiting to see will come and visit the line. The stars of Supernatural even brought fans pizza and coffee!