When I first saw Tomodachi Life for 3DS in Japan, I was pretty excited. My Japanese isn’t too great, but I was still really tempted to buy it, and maybe I should have. It’s a game with a fairly modern setting, with open gameplay, and (from what I’ve learned from doing this review) is a reasonably slow paced, depending on your playstyle. I could tell the game was about making or importing my Miis, giving them a personality, and letting them interact. It sounded like a lot of fun, but other games and projects made it seem like something I didn’t have time for.

Now, fast forward to this year’s reveal that the game was coming to the west, thanks to Nintendo Direct. I watched it, sent it to my brother without saying very much, and he had the same thought as me: “I want to buy that game!” Let’s try to ignore ads directed at little girls for a moment. The game just kind of spoke to us. Miis are kind of cool, and they don’t even have to look like us. In fact, I know some people have mentioned that a Mii of, well, me, looks far too similar to me and comes across as a bit creepy. I feel the same, which is the only reason I keep him around. No, Miis are always a bit different from us, so tossing them in with our friends, family, co-workers, original characters, and Batman is pretty fun. That premise alone got my attention. 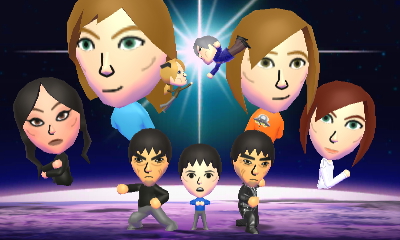 Upon receiving the game, that’s kind of what I did. I took characters my friends and I have made over the years in various MMOs and original fictions and threw them together. My first MMO characters? Check. First guild leader? Check. My co-class leader? Brother’s rerolled axe specialist? That girl who I thought was roleplaying but wasn’t? Check, check, and creepily checked. You don’t just make celebrities and throw them in, as I feel like some of the Nintendo ads kind of push. I mean, you can, but here’s the thing about Tomodachi Life: it’s your life, with Miis.

See, whether you like it or not, the first character you’re creating will be your look alike. You don’t just design their image, but give them a family, a nickname, birthday, voice (the game is fully voiced, and you can help the game out by inserting the proper pronunciation- sorry for those who like Simlish), and personality. For the rest of the game, you will be called that character’s look alike, and that character will be treated like your literal avatar, a small piece of yourself that, along with the other Miis, will call on you to come in and act as a sort of god to improve people’s daily lives.

It’s this “daily life” aspect that makes the game feel a bit more Animal Crossing than The Sims. Yes, it does have the ability to control and make characters, but rather than just watching how they go or taking control of them like some sort of god, the game is constantly, actively, literally asking for you to participate. Not you the player but you who made yourself and put put yourself into their world, whether that character is really like you or not. For me, since all my Miis are characters my friends or I created as characters and not so much ourselves, it’s deeply personal. You can go the “my little sister is marrying Shaq!” route if you want, and I’m sure that has an interesting feel to it, but this is just what I’ve done. 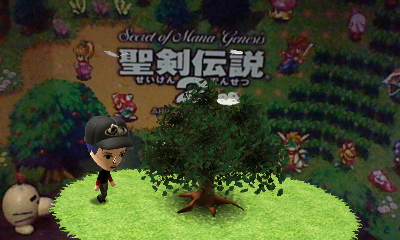 The thing is, this sort of gameplay is also a bit slow. When the Miis aren’t having any problems, you don’t have a lot of game to play. Unlike Animal Crossing where you can be fishing or catching bugs all day to make money, your activity revolves around your Miis. Oddly enough, if you want more to do, it means pumping out more Miis and hoping they have problems for you to fix (and thus give you ways to earn money to support Miis you like). For example, you earn money by feeding Miis, petting them, and solving their problems. However, they will only eat so much. Petting them is on a timer. Problems come and go. Sometimes they want to play a game with you, but the games are very short and simple, such as trying to pick a non-joker card from a hand of two cards, catching a falling object, or playing matching games.

In this way, the game is certainly more casual friendly. I don’t feel pressured to play the game everyday as I do with Animal Crossing, where a day away means someone moves out, flowers die, or a yearly event is missed. I’ve missed a day or two since I’ve started this game, and when that happened… nothing. Yeah, some people had a fight and stopped being friends, but no one blamed that on me. They didn’t kill each other. No one left the island. Everything was fine. For a casual player, this is rather nice.

However, in that respect, the game also feels a bit limited. If you want to do more, you need to make more Miis. Those Miis are potential love interests and rivals for the Miis you care about. You’re using your money and supplies to help them, so the extra play options and value of making more Miis isn’t just a positive additional gameplay point. It’s something that could really end up biting you in the butt. Yes, you can open up more options faster, since the game really is gated depending on rather limited interactions (I’ve had less than 30 Miis and only recently, after 20 days of play, just got my first baby), but you have to wonder if it’s worth it or not. 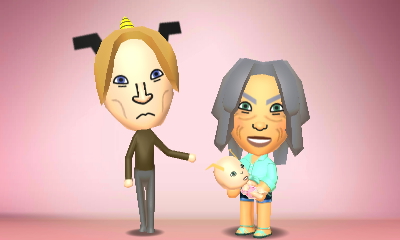 The game’s street pass option is equally light. You can ship off your kids to explore other islands it seems, but my baby is barely able to leave the crib as is. I did play host to a few travelers though, but they jumped ship for another island after only a day in my experience. I gave them some nice food, so I wonder what became of them and what, if anything, they really added to my experience. The different “exports” (specialty items your game opens up to other players you tag) are kind of neat, but there seems to be a good amount, and I only was able to tag so many people because I went to E3. How a normal player will unlock many of those items is beyond me. Like in other games, street pass seems like a feature that’s great for those living in bustling cities full of gamers but… we don’t all live in Tokyo. A normal day out in my American hometown one week after the game’s release in the states yielded few new exports, even after going by a few malls, electronic shops, and (of course) game stores in the Los Angeles area.

If you’re looking for a personal experience and a casual game, Tomodachi Life is a great pick. The slow pace makes it a game you can put down, but will want to pick back up. Having friends make new characters can be pretty fun, but unlike other games, once they do that, there’s very little else they can do for that character. And that’s the limitation of the game. If, like me, you don’t want to put the game down and feel hardcore about it, your main option is to just keep pumping out Miis that you really just might not care about. If the game sounds fun, but you want something you can play for hours a day without making tons of Miis to create a bloated island, you might want to wait till your schedule picks up and you have to budget your gaming time. It’ll make your experience much better!

Teacher by day, writer by part of the day, and sleeping sometimes at night, Laguna is a critical Nintendo fanboy that can often be found playing PC games. He also writes about Japanese culture for Tofugu.com.