It’s that time of year again, folks. The time for balloon popping, glass beads, Alo’s Amazing Popped Corn, adorable pinatas shaped like our favorite bosses, and cool-looking Nebula mounts. It’s Carnival of the Ascended! While the event won’t officially start until 3:30 PM PST later today, yesterday’s patch made this year’s purchasable goodies appear on the RIFT Store as well as plopped a chunk of new achievements for us to chase after (also, check out the RIFT mobile app for the event-themed scratcher mini-game).

From the looks of it, the event itself will be largely unchanged from last year except for a few new items to collect and the new achievements. This preview will go over the new goodies and achievements specifically. If this is your first year taking part in Carnival of the Ascended, feel free to check out our guide from last year as well as our writeup from two years ago for more info about the event itself and what it will consist of.

New Prizes for All!

Note: Prices below listed with the Patron discount in effect.

There’s a new Carnival of the Ascended-themed lockbox this year, of course, that’s already purchasable on the RIFT Store. It’s called the Carnival Celebration Crate and has a few interesting items held within. These crates can be picked up for 360 Credits apiece or with 150 Prize Tickets. Yes, that’s right– it looks like we finally don’t have a Credit-only lockbox with this world event. The most interesting item that can be inside this crate is the Knight Spider mount, previewed below: 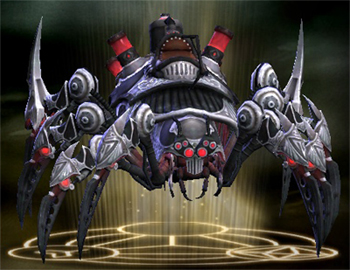 Players also have a chance of obtaining all of the older Carnival mounts as well as some new pets, a fun item or two, or relic artifacts. From left to right below, here is a preview of some of the new pets– Tito, Alfred, The Tickle Monster, Noms, and Cliklik:

There are a whole lot of the other new pets as well from the looks of one of the new achievements.

The other Carnival of the Ascended goodies are also previewing on the store UI, and from the looks of it most items are relatively unchanged from last year. There’s a special Third Anniversary Cape that can be picked up with 25 Glass Beads, previewed to the right.

Oh, and there’s also a new cake to nom on this year. It’s even epic, which means it might be tastier than last year’s cake. For dimension lovers, there are some new dimension bundles to pick up:

And there’s a new dimension key available– Castle Fortune, which can be picked up for 3 Doubloons and 200 Glass Beads or 1530 Credits.

There are four new little goodies that are usable, stay in your bags, and cause your character to glow with a colored aura: Touch of the Redsand (red), Touch of Vivid Dreamer (pink), Touch of the Vibrant (yellow), and Touch of the Mystics (white). Each of these cost 400 Glass Beads of 333 Credits apiece. Collecting all four will grant a new achievement.

There’s also one bit of good news with this preview. It looks like there’s been a reduction in the Prize Ticket costs for some of the Carnival pets and other goodies. The dragon-themed balloon companions are down to 100 Prize Tickets this year as opposed to the price of 250 from last year. The Magician’s Kit which makes your character’s head explode is down to 400 Glass Beads instead of 500. The Box of Random Artifacts is 100 Prize Tickets instead of 125.

Oddly enough, the title writs are up to 50 Glass Beads instead of 1 Glass Bead each. Everything else such as the Fluffy companions, the masks, and the dimension floats are still pretty pricey and retain their costs from last year.

New Carnival of the Ascended Achievements 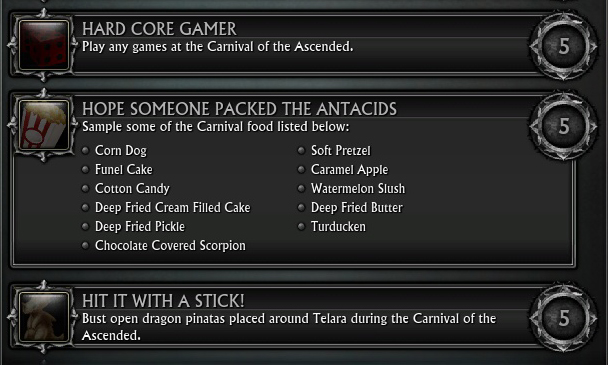 Finally we have some new event-themed achievements to chase after this year! They’re much in line with the new achievements that were added for this past year’s Fae Yule. Some of the objectives include taking part in carnival games, taking part in a particular zone’s carnival games (yep, there might be a reason to head out to Fortune’s Shore this year), sampling all event food items, busting open a certain number of pinatas that are strewn across the world, collecting parade cores, collecting Glass Beads, and collecting all of the purchasable titles.

As mentioned above, there’s also a new achievement to collect four new glowing “Touch of the” effect items as well as one to open all of the Carnival-themed dimension kits. There’s another to collect all of the new pets, of course, and there looks to be a whopping total of 17 to collect. The reward for collecting all of the pets is named Tito, and interestingly enough, is one of the same pets that’s offered as a possible reward for opening up a Carnival Celebration Crate. This little Tito fellow seems to be quite popular this year!

Last but not least, there are two meta achievements for completing chunks of the new achievements. The grand prize for collecting all of the new pets, glowey objects, dimension kits, and all of the masks (the same achievement that was added last year is included in this meta) is the same mount that’s offered in the Carnival Celebration Crate– the Knight Spider. It seems Trion decided to go the route of giving players more options for collecting crate-specific items like pets and mounts this time, which is definitely good to see.