We tried the portable, but now it’s time for the console: Smash Bros Wii U. I’m not writing this as a review quite yet, but as a preview piece since I’ve only had about ten hours with the game, all solo since the servers won’t go live until launch day. While I was provided a preview copy, I do not have an Amiibo to test with. For this reason, I’m simply doing a preview until I can see all the game has to offer, and obviously that will take some time. The game is surprisingly large, and although we’ve had time to prepare for the console game, not everything is perfect.

First is the controls. I don’t have the Gamecube adapter, so I have to use a Wii remote, Wii remote classic controller, or the usual Wii U gamepad. I’ve tried all for extended periods of time, and oddly enough, the unwieldy Wii U gamepad is my favorite so far, but it is a very distant third to the 3DS, which is an even further distant second to the Gamecube controller. Really Nintendo, the GC controller is one of those “if it wasn’t broke,” situations. I’m fine with your new zany controllers, but if you’re going to give me a D-pad and joystick, just let me use the GC controller. The other two options, the Wii Remote and Classic controller, are useable, but for a long time smasher, they feel awkward, especially after I’ve just gotten used to the 3DS.

Now, the 3DS connection we’ve been staring at for months only allows for Smash playing, not the other game modes, like All-Star or Smash Tour. You can connect your Japanese 3DS to a Wii U version of the game though, and I’m told Amiibo do work cross region. You can upload your custom characters, even Mii-Fighters with costumes you haven’t unlocked, but you can’t edit them once moved. While it’s nice that the past months (remember, I began with the Japanese version) weren’t a total waste, I do really wish I could just unlock all the moves I have on both the Japanese and US versions of Smash. I’m a sucker though, so I’ll be earning my custom parts a third time it seems.

For new modes, Smash Tour feels like Mario Party but without individual turns. Unpredictable, fun, occasional mini-games, and a strong “finale” which is the main fight. I can see lots of opportunities for people to gang up on a strong player or help out their friends. However, since I’m playing alone, I think I prefer Smash Run. I know it’s a multiplayer game, but Smash Run felt like a fast and effective way to play Smash Bros a little differently. While I like Smash Tour, 15 minutes playing a game that feels like a party game rather than a fighter can be a bit depressing.

The new Master Orders and Crazy Orders offer the chance to gamble and win some prizes, but these are more for the collector type. I must admit, I haven’t even checked my collection in the 3DS version, so doing so in the Wii U version only occurred for preview purposes and it’s… well, good enough for me, but interesting enough for me to write about in more detail. I don’t consider myself a hardcore smasher, but I prefer to unlock things that are used in the battles.

Speaking of which, the new classic mode is quite fun, and perhaps faster than the 3DS version (or so it feels). You’re given a “rival” that you pretty much want to take on as the last challenger on a board filled with figurines of other fighters. Where the figures stand indicates who you’re fighting, and you’ll notice some have prize icons above them, such as event tickets for Crazy Orders or trophies. These are on top of winning loot from the slot reel you use before the match. It’s a different method from the 3DS version, and not just because of the Master Fortress. The fact that you can, and often must, participate in hoard battles with more than 3 other opponents (often 5-6, but a full 8 isn’t rare) is probably why this mode feels faster, but also in some ways, more challenging, which I can appreciate to an extent. 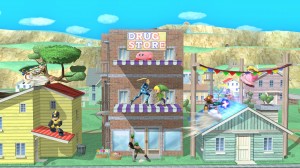 This is where I have to bring in the game’s 4+ fighting modes. Originally I thought I’d be left out in the cold when it came to this part of the game, but there’s plenty of it in the Wii U version, and I get the feeling that may not be welcomed by everyone, especially fans of certain characters. Those who felt Mega Man was a bit underwhelming in 3DS will feel more strongly about it in the Wii U version I think. It does, however, make certain customizations feel more useful. For example, Ness’ lasting PK Thunder was a nice bonus for those who didn’t want people jumping into their Thunder to screw their triple jump, but in a match with more than 5 people, it feels necessary. I have a feeling we’ll see some backlash from certain hardcore Smashers due to this, but maybe I’m wrong.

We do have Event mode now though, and that may appeal to them. It’s kind of like Adventure Mode in Hyrule Warriors; you have a specific character and task to execute that’s not like something you experience in the regular multiplayer game. While there are different difficulties, the reward page will specify what difficulty you need to achieve to get said reward, as well as other limitations, like character or time. I think serious Smashers may enjoy this since it can test your technical mastery of characters, though they could also hate it because of the gimmicks.

My biggest concern, however, is about how much of this can go online. Maybe it’s due to my age again, but I just don’t have local people to play with. It’s hard enough I have few friends with a Wii U, but when they do, we’re constantly frustrated by the limited online capabilities of the system. “Together but not quite” in games like Hyrule Warriors leaves much to be desired, so having a lot of gameplay options limited to local only is a big tease I think, including for Japanese players (I don’t think I’ve found a student at any of my schools who have a Wii U, and I live in Japan). 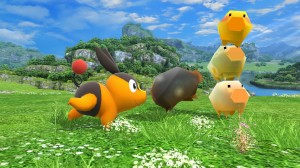 This brings up my second concern: Nintendo made a huge game that I feel will only see use in one or two areas for most players: Smash mode and classic mode. People may want to do unlocks, but if I were a competitive Smash Player, I’d simply keep playing the 3DS version if I felt like unlocking parts/moves and use the Wii U for access to the GC controller. As I’ve mentioned before, Smash Run just hasn’t seemed popular here in Japan, so having so many non-Smash modes makes me wonder whether or not these new features will be valued by some players. I may love many of them, but I often find myself in the minority of the Smash community these days.

As for the lack of Amiibo figures? So far, I don’t feel the pinch. Thomas Schulenberg from Joystiq has experience with that, and more time with the game than I had, but is quite a different player from myself. He doesn’t notice much of a difference between his level 50 Amiibo and a level 9 CPU, but since there’s so little news about that at the moment, it’s hard to accept at this point. I do have to admit I am very leery of the Amiibo thing, as Nintendo often introduces a gimmick that largely works with one title and gets shoe-horned into others with few results. Smash is supposed to be the big big for it though, so I’ll reserve my judgement for now.

Of course, all of this may change in a few days/weeks as I play more, but for now, these are my initial thoughts on the game. The console Smash brings a lot to the table. I do get some feeling of a connection between the two games, especially in terms of basic fighter mechanics. There’s a good single player challenge so far with lots of unlocks, and I can certainly see this as a great party game. I just worry about whether or not there’s a big enough crowd that’s willing to show up for all it’s events after the rather lonely time I’ve had with the 3DS version’s Smash Run.