I’m a big Smash Bros fan. Huge. Ever since middle school it’s been one of those games I really love. It’s a game I could play with friends, siblings, and strangers. I could go to a store or convention and have fun playing against people most of the time. But somewhere in Melee I felt some people took it too seriously. No items and only one stage? 1 v 1 fights? How is that a melee or brawl? That’s not even a street fight any more! It’s more of a boxing match! While people are free to love the game in anyway they choose, for me, Smash Bros is a fighting game about randomness. About reacting to both an opponent and chance. About a fight, not fencing duel. And it’s in that light I’m mainly going to address my thoughts on Smash Bros for 3DS, the Japanese version.

Now, to be clear, I wish no ill will towards those who Smash competitively. We call all share the series, and I applaud the efforts by  some modders to push the game in popular directions. However, one thing I need to really drive home is this idea to share the series. While I like that the new game allows every stage to become Final Destination (a long, flat, no-gimmicks stage) and that there’s online rank play, I don’t want the game to become just another fighter ala Street Fighter. Having full control over my character is fun for me, but not for someone who is new to the game. The fight won’t be fun for them at all, and remember, I like introducing people to new games and genres (Note: For those wondering, yes, my girlfriend’s Smashed now, but only against level 1 CPUs and me in the demo).

That being said, for the competitive players, I offer you some notes from around Japan. I’ve been checking out other game cafes and “real meets” (like I did for Monster Hunter 4), and while I can’t say I’ve played with a ton of people, those I have played with are usually more competitive. No items, no gimmick stages, no customization options (moves or stats). These players seem happy with the new changes to the basic combat overall though. The Japanese players and I have some language barriers, but they all agree the game is less “floaty” (or “fast fast!” as they sometimes say). English speaking vets say the same, but specifically, that it’s less floaty than Brawl, but it’s still not quite Melee. 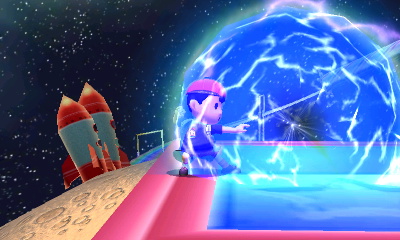 Now, I know some people are upset with the roster changes. I lost Lucas, my old main, but the customization options do let Ness adjust some of his moves to play a little more like Lucas, so that’s comforting. Other characters also have moves that tweak a character to feel a bit more like an older or different version/”clone.”That may appeal to some more competitive players, and I really hope it does, because one thing I really like about this new Smash Bros is the amount of customization involved.

The customization in this game allows you to change each of a character’s special moves with a maximum of 2 other variations of the move (most need to be unlocked or found while playing the single player modes or Smash Run). While some moves, like Ness’, make him play like another character, others completely change how to play a character. For example, one of Marth’s traditional weaknesses has been his triple jump’s poor recovery ability, going a bit up with barely any horizontal movement. However, you can customize his jump to mostly go vertically instead, or give him a super triple jump but deal no damage. My personal favorite so far is exchanging Mega Man’s Leaf Shield with a Skull Shield that reflects energy projectiles. It feels much more useful, but since it doesn’t last as long as the Leaf Shield, it’s trickier to play.

In addition to moves, you can also adjust stats, and in some cases, add small bonuses (such as adding some attack, losing a chunk of defense, but gaining a 2% auto heal every 5 seconds or so). This really allows you to change a character. I’ve customized my Mega Man to be more of a heavy powerhouse, making his jumping skills suffer but allowing me to more easily spam his Up-Air attack in single player mode for farming the single player hardmode.

Admittedly, some features are gone. This version of the game doesn’t have level customization. Break the targets and race to the finish are much more side-dishes than bonus rounds like the other game. There’s no shooting coins for trophies. Instead, we have a more robust single player mode where you increase the difficulty by betting more coins. However, it rarely feel like gambling to me since even on my worst play throughs I’ve broken even and come out with some trinkets. Before each round, you get to stop a slot reel that decides what (if any) reward you get. The higher the difficulty, the better rewards you can get here. 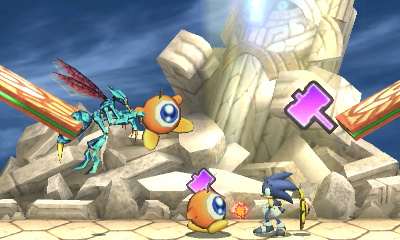 Smash Run, however, has been a great joy. While the old single player adventure mode is gone (and the wonderful cut scenes), what we got in return is a lot more fun in my opinion. The idea is rather simple: spend 5 minutes running around getting power ups, trophies, and other trinkets, then compete in some sort of match. The end matches range from a simple 4 way melee to race to the finish games, getting the most kills against monsters, and being the highest along an upwards moving platforming track when the time is up. These activities were cut from the main game (and vertical climbing stages have pretty much been eliminated) and act as a side mission that allow, nay, encourages customization, as each character can choose power-ups in the customization options to help through in the preparation stages. Give yourself super stars, bonus to head attacks, or a damaging aura for a few seconds. I’ve enjoyed Smash Run tremendously on my own, but have only played perhaps one round against another person mostly because, well, most people out here seem more competitive.

Effectively, what’s occurred is that the game created several levels of customization and “fun” activities so that players have a gradient to rely on, choosing how much or little “randomness” they want to allow in their game. I can imagine some tournaments allowing for custom move sets but not powers, but the current issue is that customization is strictly reduced to friends, and Smash Run is only available for local play. 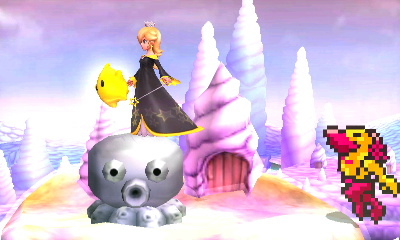 However, as one smasher noted, for the competitive players, the game feels more like an update than something new and fresh. Playing without the customization options probably is a big reason for this.

Those interested in online play should be happy to hear that the lag’s been addressed a lot better on the 3DS. I’ve had some bad games, but usually it was my connection and not Nintendo’s fault (I was nearing my phone’s data limit!). However, I still feel like the lack of the C-stick makes the characters a bit harder to control than the last two versions of the game. You’ll get used to the circle pad, even if it’s not as good as the Game Cube controller. The game really is a solid port, plus it adds a lot of new meat so it feels less like an update and more like a new game to me (I’m looking at you, Capcom!)

That being said, I must admit that I’m having more fun with Hyrule Warriors than Smash Bros for 3DS for the moment, mostly because it has a stronger single player mode and is easier to introduce people to. If you’ve got limited funds and/or time and can only choose one, I’d got with HW. However, if you want a solid game that’s portable and only have time for one new Nintendo game at the moment, the new Smash certainly provides that and more. Also keep in mind that the game will link with the Wii U version in the future. Just give the customization options a chance, even if you’re a competitive player. They really do add a lot more to the series.

The post Smash Your Way: Thoughts on Japanese Smash Bros for 3DS appeared first on JunkiesNation.