I have to admit that I’m someone who doesn’t always pick up games or consoles the first day. If it’s something I’ve really been looking forward to, and I have the spare money, I do. Other times, however, I look for the late reviews. News that’s come out after the game’s released because, let’s face it, a lot of game sites give positive reviews just to ensure they keep getting review copies (hint: we don’t do that but do receive review copies). Smash Bros for Wii U is over a month old now, but there is still a lot to do with it. The question for some people is whether or not it’s fun enough to bother with.

Let’s start with my opinions from my initial preview.

I’m still not totally enjoying a lot of the controller options. I’ve gotten much more comfortable with the Wii U game pad, especially since I’ve come to enjoy playing games on the small screen lately. Don’t get me wrong, everything looks better on a big screen, gorgeous even, but I take a lot of notes on my computer, so playing on the game pad saves me some walking time. However, for the full feeling of the game, the GameCube controller is best. I picked up an adapter from Japan once one of Nintendo’s PR folks told me it should work cross region, and I’ve been very happy with it (though I do wish I could use that controller for Mario Kart 8). I just wish they’d let the 3DS work as it’s own controller in every game mode, not just Smash. 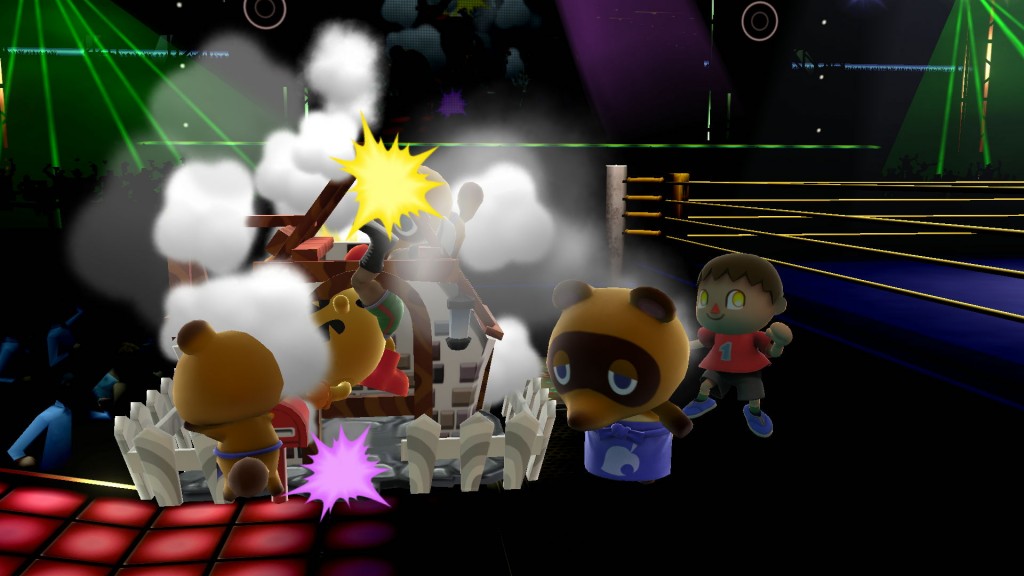 I still love Smash Tour, even though I’ve only been able to play it alone. I really wish I could play it online, kind of (more on online play later). It can be frustrating at times, especially if I haven’t played the game or a certain character in awhile and get killed quickly in a stock match, but it happens. The other modes, such as events, Master/Crazy orders, even the basic classic mode are still holding my attention. I enjoy them now, even after I’ve played them a bunch, almost as much as when I first started playing.

However, I don’t just want to look at my own thoughts. After the game’s been out for awhile, I wanted to look at a few of my predictions about competitive players. Those who may be on the fence who loved Melee or Brawl for it’s purity may not be happy with the latest entry. I decided to poll some competitive players (though the topic was moved, as of this writing, there have been no new votes) and ask for feedback. As I predicted, 8 player Smash and Smash Tour aren’t the most popular modes, but were better received than I thought. However, one thing I hadn’t thought about was people disliking classic mode due to the larger number of players being present in some fights. While I understand people in general (not just hardcores) disliking gimmick fights, and therefor not always able to appreciate certain mods, I hadn’t thought about how much a competitive player might play the classic mode. Obviously not everyone is the same, casual or hardcore, but there seems to be a bit of a trend with them disliking the more accessible or gimmicky modes. 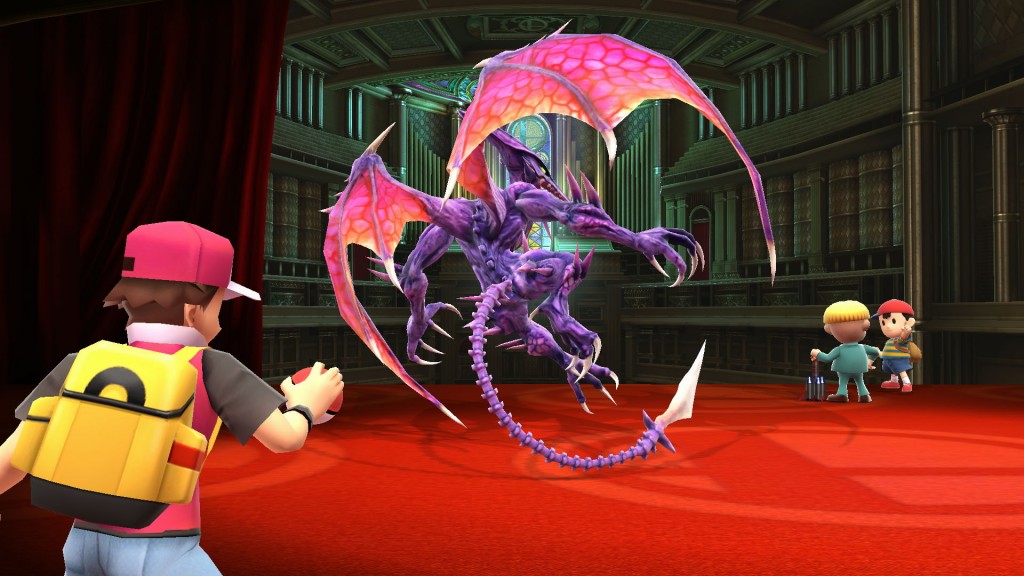 Now, about the big problems I was concerned about. We only have the Smash mode online. As of this writing, we can’t share custom levels. I didn’t say much about them last time, but I have to admit that I feel like Brawl’s level editor was better. Costume shapes are neat, but there are less tools, and those of us who aren’t very artistic have trouble making “pretty” levels. Perhaps this is why they can’t be shared yet. However, there are so many other modes that local play get that online doesn’t that I often find myself forgetting to pursue challenges to unlock things. I usually take customizations from my 3DS versions, so my wall of unlocks is actually pretty bare by comparison. As a solo player, I often play classic or Smash Tour with the occasional Crazy Orders alone, then (try) to play Smash online.

I say “try” because, much like with the 3DS version of the game, Smash Bros for Wii U has connection issues. Have a 2 minute game stretch to nearly 10 due to lag is not fun for anyone. While the game is fairly smooth sometimes, other times, it’s a complete nightmare. Yes, it’s free, but if Nintendo needs some money, why not offer a premium service for those who want it? I really like a lot of the local play options, but I don’t live near a lot of my gamer friends and families. I’ve heard people complain several times that they can’t do 8 player Smash because, simply put, there aren’t enough local Smashers for them to play with. Having this online would be much more fun. Sakurai really does put a lot into these games, but I feel like in this day and age, online play options are a requirement, and local play, if anything, should have less options. Perhaps this is another reason why the Wii U has sold less consoles. After all, if Nintendo’s multiplayer games are mostly supporting local play, and if I’m just a casual player, isn’t it better to just mooch off my friend than to buy it and play one exclusive mode (For Glory)?

All of this may sound negative, but this is just me being critical. From the features I tested before, I’m still very much satisfied with the game. I have a hard time playing on home consoles these days, so the fact that there is some connectivity between the Wii U and 3DS games makes things easier on me (though I still wish I could just import all my 3DS data). Unless you’re a very technical player who only wishes to become skilled for tournament play, I can highly recommend that you pick up Smash Bros for Wii U. Even hardcores can find “fun” stuff they enjoy about the new game. However, I have to add some thoughts on the Amiibos.

As you may recall, I wasn’t able to test an Amiibo for my preview. I had to wait like many of you for the actual release, and I had a few more bumps to deal with as well. Originally I heard they were pretty much like level 9 CPUs, but others have indicated they’re quite smart. I’m not so much a collector, as reading about how to play games is usually why I have an advantage over many gamers, but I’m also not hardcore about Smash these days except as a general enthusiast, especially when it comes to Sakurai’s work with so many IPs and ideas being entrusted to him. 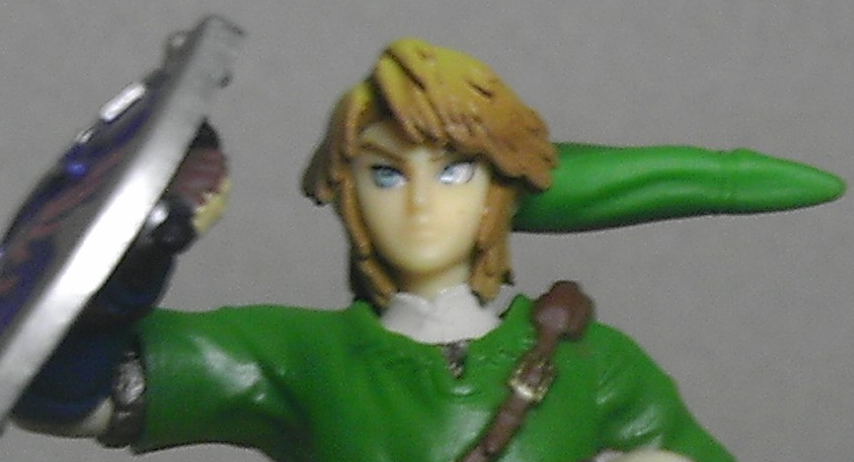 After Smash‘s release, I went out and bought some Amiibo like anyone else might. I’d seen the prototypes at E3, but obviously my cross-eyed Link, or “Ravio” as I’ve named the Amiibo, is pretty different. However, I’m really not buying these as toys/figures. I’m looking at them as DLC, and since Link works with 3/3 of the current games that support Amiibos (special content in Hyrule Warriors, a costume in Mario Kart 8, and of course Smash Bros for Wii U), I figured he’d be the best first pick.

After registering it as mine, choosing a name, and a skin (of course Ravio is purple!), I fed him some junk gear I had laying around and then gave him a custom move. Then it was play time. My first choice was Smash Tour but Amiibos aren’t allowed in that, which really felt like a waste. I thought Amiibos were supposed to be the next best thing to playing with humans, and I’ve lacked anyone to play that option with due to it being one of several features that doesn’t work online. In fact, Amiibos don’t work in 2 player event mode, All-Star, Classic… essentially, they’re only useable in Smash mode. Period. It really limits their use for more casual players trying to take advantage of most of Smash’s content outside the one mode we’ve been playing since the game began. Still, I figured I should give it a whirl.

The first match was pathetic, but Ravio grew to level 6 just from a regular 2-minute match, 1 on 1, Link versus… well, Ravio. It just wasn’t smart, or good. The second match wasn’t much better, it at all. On a custom stage, at the start of the match, it jumped into some lava on the ceiling without me even moving, and did this twice. At the end of the match, Ravio was level 8 and still embarrassing. In the third match, I tried a moving stage. While at Ravio didn’t suicide, he still acted a bit erratic. Perhaps this was because I’d whiffed with some attacks a few times, but he would use upward smashes when standing alone, far from me. Later on though, I noticed him starting to throw items, a trick I use, but also doing footstool jumps, something I hadn’t used against him. After the end of the match, he was level 10. Just 40 more to go.

At level 16, after trying longer matches and stock, I decided to try coin battle, and to also turn my handicap to “auto” to at least see if that would change anything about Ravio’s play style. He was still aiming to send me flying upwards, as I know I’m prone to do, but he’d also hookshotted to a ledge, something I had never shown him. At this point, it was obvious that the computer just makes the amiibo smarter on it’s own as it levels, but it certainly had learned at least something from me. 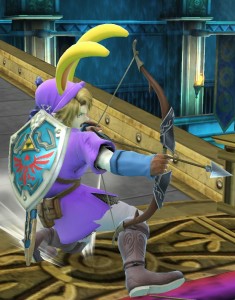 At 22, I decided to go back and feed him more gear and get some rewards. I suppose feeding them is partially supposed to help make them tougher? I’m not sure it helped, but I appreciated the rewards: coins and custom parts! They were a nice bonus, since I dislike how normal Smash barely gives any custom parts. Still, Ravio didn’t get any wins until he was level 28 and I was starting matches at 80% damage due to the handicap. Around 35, Ravio finally started to feel challenging, but partially because Amiibos have higher stats than players.

At 41, I pitted Ravio against 7 other level 9 CPUs in a 15 minute 8 player Smash. He placed third. He acted kind of erratically, jumping in place at times and just… really not doing anything. I tried this a few more times even at 50. Eventually he started winning more, but I fed him until all his stats were +26. One on one, he was tough to fight, but again, not all of his tactics were good. Probably learned some from me or the bots. He hasn’t learned everything I’ve tried to teach though. He’s not dodging, and he doesn’t often roll. I’ve heard people talk about making sure you teach them to hit during grabs at low damage percentages, but even though I don’t do this, he’s doing it. Simply put, I have a feeling they’re built to be smarter in general, but can learn a little. The stat bonuses probably are the big thing that makes them so tough.

So, final thoughts? Overall, while the game is solid and fun enough as a single player game, you’ll want to play this one with friends still. Amiibo might be good for training, but they can’t even attempt to replace real people. I would strongly hesitate to invest in Amiibo for Smash Bros unless you really love a character or want a more difficult CPU to train defensively against. Competitive players can still enjoy the game, but casuals, especially those who like a variety of fun and challenging modes should pick up the game. There’s plenty to due and great variety. If this really is Sakurai’s last Smash game, he can still walk away a winner.