This week, I sat down with Nick Robalik, the creator of Sombrero. Nick is a one-man show, doing all of the development and art work for the game. Sombrero is a 2-4 player multiplayer platformer for Windows, OSX and Linux. Players can choose different game play styles like a classic “capture the flag” or a free for all “deathmatch”.
You can find Sombrero at pixelmetal.com

Candace: I’ll start with basics. Tell me a little about Sombrero and what it is for people who don’t read websites?

Nick: Sombrero is a competitive local multiplayer game with a bit of a spaghetti western-tinged theme. I say “tinged” because, while it’s mostly western, there’s also some odd characters that pop up, like aliens, robots and the like.

It has the usual deathmatch mode, but also some interesting twists on capture the flag-style gameplay as well as what I’m calling “loot”-style so far, where the player has to grab as many bags of cash on the map as possible, while capturing campsites that act as score multipliers, and the player with the most loot at the end of the round wins. So far, people have been getting pretty pumped up playing that one.

Candace: How are players able to play Sombrero together? Do they need something like Hamachi or is the multiplayer support already in the game?

Nick: It’s local or “couch” multiplayer as of now. I suppose it COULD work over hamachi, but I haven’t tried that yet. In the long run I do plan on looking more deeply into internet-based multiplayer, but as a single developer doing all of the art, animation, sound effects and development – the music is being done by Nathaniel Chambers of Bubble Pipe Media – I need to pick my battles carefully so I don’t get end up working on the game for the next 10 years. 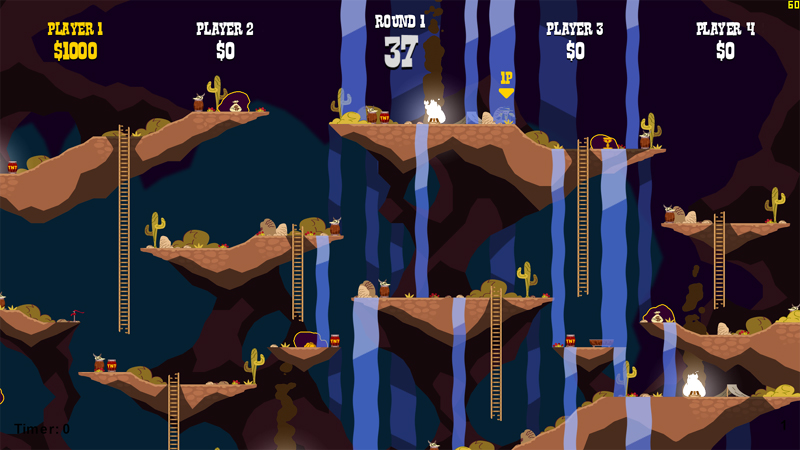 Candace: Wow, I didn’t realize you were the sole person on this project save the music. That’s really admirable. Back to Sombrero game play! It has a really old school arcade style look and feel to it, was that an inspiration for the game?

Nick: Kind of. I’m old enough that I remember all of those old arcade games and still play them. I even still have my original Atari 2600 console, and it still works. I still enjoy games with unexpectedly deep gameplay like some of those old arcade games, where you’re given a limited amount to work with and it comes down to player skill to determine the winner, not just gadgets and weapon upgrades and the like.

Sombrero’s look is based more on old Warner Bros. cartoons, and on more modern stuff like Samurai Jack.

Candace: Did you create Sombrero to require a higher element of skill or strategy in the game play?

Nick: Compared to some other games in the newly-popular couch mutliplayer drama I’d like to think it takes a bit more of both than is provided elsewhere. Since you can shoot in any direction, but have to deal with weapon reloading time, it takes a bit more skill & strategy than just shooting at everyone else. In the “loot” gameplay style especially, it’s possible to win without attacking any other players directly, using the environment, which contains exploding barrels, ricocheting shots & destructible platforms to your advantage. Or detriment.

Candace: The “loot” game play style looks like it’s the most popular but there is a simple deathmatch game. Since Sombrero does require some skill elements, do you ever see a possibility of the game having any competitive edge to it? Maybe some small tournaments or being part of other gaming groups?

Nick: I don’t see why not. Every player is given the same tools and, if they get good at using the tools available to them, it can become very competitive. I expect in the near future I’ll be running a small tournament at one of the playtest nights in NYC I’ve been bringing Sombrero to so I can get feedback, work out bugs that only pop up when 4-players are playing for a few hours, etc.

While I still consider it in an alpha state in terms of content & features, the gameplay that’s currently available has become extremely polished thanks to feedback from all of public playtesting, and the feedback has been very helpful for me in terms of focusing the game on the gameplay elements people have responded to in a positive way.
I want people to play the game and enjoy it, so being able to get comments, feedback & criticism from people who actually play games has been awesome. 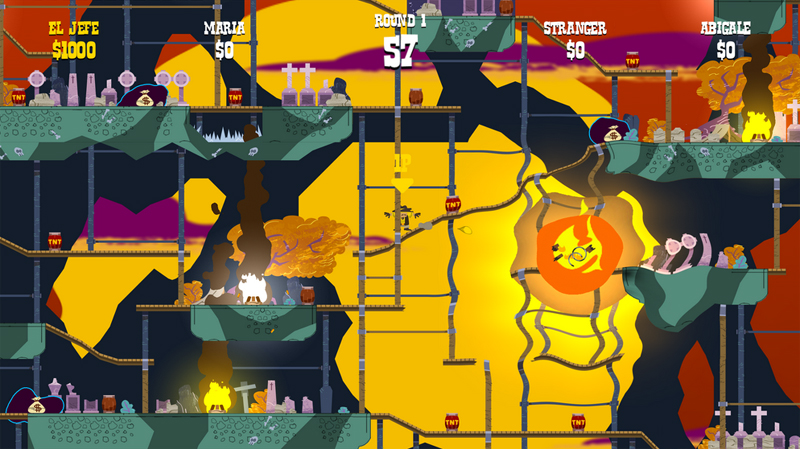 Candace: How long do you think it will be until the game is out of it’s current stage and will be “finished”? Of course, we know a game is never fully finished. Always new content and tweaks.

Nick: It’s getting more complete every day. My goal is to have the initial release out at the end of this year or beginning of next year. After that, I’ll be working on a few DLC packs that will be available for free. I’m not especially comfortable with charging for DLC, so what I’m planning to do is release the game for a lower price, then raise it after each content pack, so those who purchase early can expect additional content for free, while those purchasing later will be paying a small amount more, since the game they’re buying is a bigger game than those who purchased earlier. I don’t see it going over $ 12-$ 15 though. It’ll probably start at around $ 8-$ 10.

Candace: Before I ask about release of the game, let me ask a few questions about what players see and feel when they’re playing Sombrero. At the beginning, there’s a character select screen. Do the different characters offer different game play styles or is it strictly aesthetic?

Nick: It’s strictly aesthetic. I had plans at one point to customize the character’s handling somewhat, but with 20+ playable characters planned, that’s a bit much for me to handle. The upshot there’s a good chance that there’s at least a few characters in there *everyone* will like to play as.

Candace: Then you choose a stage and jump right into the action, right? How long does an average game take?

Nick: Players will be able to set the length of each round as well as how many rounds in a match to whatever they want. The default is 120 seconds a round with 3 rounds. Which is kind of a shame, really, because the soundtrack Nathaniel created has much longer tracks, but that’s what felt right as a good starting length based on playtesting feedback.

Candace: How large are the maps? We know already there are elements like exploding barrels and other things, but can you utilize the walls or pitfalls and other obstacles to your advantage?

Nick: You can definitely utilize the pitfalls to your advantage, and do something like, say, using an exploding barrel to remove a platform above a spiked pit , causing another player to fall in. No wall jumps as of now, but that may be added in as a time-limited powerup.

Candace: O.K. time to wrap it up a little. Do you have any “super secret” things about Sombrero you can tell me?

Nick: Hmm. Well, I guess I kind of gave one away when I mentioned powerups, since they haven’t appeared in any public builds yet. So, yeah, powerups will be a thing.

Candace: I noticed that but I didn’t say anything. So, powerups will be a thing. You read here first!

Nick: Oh! And there’s also a number of guest characters in the game that are cameos from other indie games by developers who I respect and who are making other awesome games. They’ll be available as player characters as well, for the first time, when I show the game at the Boston Festival of Indie Games on Saturday, Sept 13th.

Candace: Nice! So any readers who are at the festival need to come check out Sombrero! Last but not least, what platforms can we find Sombrero on?

Nick: At the initial release it’ll be available on Windows, OSX and Linux. After that, I’ll be looking at the consoles. I’m a licensed Nintendo developer, so who knows…maybe a Wii U version is in the future in additional to the big two.

Candace: Awesome. Thank you so much for giving us a peek into Sombrero.

The post Sitting Down with Sombrero appeared first on JunkiesNation.