Have any of your co-workers recently come up to you and ask you about some game called RIFT? There’s a good chance that if they haven’t already, they will soon. Recently Trion has pushed with a large media campaign placing RIFT ads in many different places. For example, we’ve already seen Rift on the back of a bus. And now, you might of seen Rift’s logo in an episode of “Big Bang Theory”. 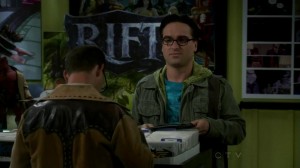 This tells you a lot about Trion’s campaign to bring Rift’s awareness to the masses. All diehard fans of MMORPG’s have at least played the trial of Rift already, but what about the larger market? Those people that only know WOW because they played it for a month or so back in 2008? These are the people who casually play video games and spend most of their time on Facebook playing farmville but sometimes branch out to a AAA title. Trion is now trying to tap that market share with a broader appeal and advertising effort.

The question is, “Is it working?”

Without getting the numbers straight from Trion, we have no idea. Server numbers and populations seem to be stable if not growing a bit. There has been more activity in some of the usual places. Is this merely the cycle of MMOG players coming back or is it the result of Trion’s efforts of reducing game and sub costs?

Trion is slowing developing more and more casual type of game events with upcoming patch 1.6 and Ember Isles. And as Trion matures, it is getting a better idea on how to use their rift and dynamic gaming system to create a better game. Once Ember Isles goes live and we can see in a living environment, outside the PTS, we will finally see Trion’s first new piece of world content since release. Personally, I can’t wait to see what they’ve learned. Most of the “dynamic systems” in the game have been a bit of a disappointment since I know what they are capable of.

So in the mean time, keep your eye out for RIFT in some unusual places as Trion tries to grab the casual player and pull them into Telara.

And as an additional note: This week’s episode of RIFTCeption will be delayed due to the North East being attacked by snow and the ensuing loss of electricity.