Hype has been building for RIFT 3.0– our next expansion, also known as RIFT: Nightmare Tide– across the internet since Hotfix 2.7. This week our levels of hype took a giant leap forward with the announcement of 2.8′s arrival on August 6th! RIFT: 2.8 is being called RIFT: Madness Wakes and it’s the last big stop before the watery depths of Nightmare Tide.

Tales of the Deep: Infinity Theft

Early in July we were treated to some early Nightmare Tide lore:

“Fools!” cackled Alsbeth, as a new wave of corpses clawed their way out of the scorched earth. “Did you think my master would let you escape so easily?”Her shambling horde was disconcerting, thought Kira. It was too large, its zombies, skeletons, and wights bolstered by otherworldly shapers and their hideous creations. Still, she grinned as she vanished beyond the fissure running through Alsbeth’s ranks, a volcanic gash that looked distinctly like the disapproving sneer of Rahn Chuluun – even as it threatened to split Telara in half.This discordance was lost on Alsbeth. She continued to wail and chant. “Your petty machines will help you no more than the gods you– “Kira’s quick yet savage strike put an end to the woman’s screeching. She made sure to twist the knife just a bit. If she was going to relive this apocalypse, she might as well enjoy it.Alsbeth crumpled, but the body that sprawled across the ground wasn’t hers. It was that of Kira’s companion, Uriel. The Bahmi clutched at her messy wound and tried to hold onto her insides. “Why, Kira? Why cut our time short?”“NO!” Kira sat up in her tent in a panic. She was drenched in sweat even though it was freezing on the Steppes. She looked down at the dagger in her hand. She could have hurt herself. She could have hurt—“URIEL!”Kira leaped out of the tent into a relentless rain. A saccharine sweetness hung in the air, a purplish mist that Kira had tasted it in her dream. It parted as a Mathosian guard stumbled into view.“Why aren’t you at your post?” Kira asked. “What happened to the watch?”“I didn’t mean to go in the woods, Mommy!” the guard said. “The little green man promised me candy.” He stared at her vacantly, his voice soft like a scared child’s. He was sleep walking, Kira realized. Everyone in the camp seemed to be sleep walking, she discovered, each lost in a nightmare of their own making.Kira heard a familiar rumble in the sky, the machinic sound of unimaginable power coursing through the ancient stone of the floating Infinity Gate. If someone had been working its controls in their sleep – if Uriel had been at them late like she so often was – who knows what new horrors had been released.Kira sprinted across the rain-slick stone toward the Empyreal controls, and two figures came into view: Uriel and a hooded figure who stooped beside her, whispering into her ear as she operated the massive artifact. With a scream, Kira leapt at the man, taking him down with a single slice of her dagger.“Wake up, Uriel! Don’t press anything!” She embraced her companion and pulled her away from the central dais filled with its hodgepodge of magic and technology. Uriel groaned unhappily, reaching unsuccessfully for the controls, then woke with a start.“Kira! What … am I doing out here?” The Bahmi mage shook off the tendrils of sleep. “I dreamed I was a girl again, playing a game with my father. It was an old Eth game that looked like the Gate’s—”“Controls,” Kira finished. “That one there is responsible.” She pointed her dagger toward the hooded figure, who was already spitting up blood.“The Dream Coven teaches us that life is but a sleeping illusion,” he said, laughing through the pain as he spoke. “Now is my chance to wake.” Kira knew it was never a good sign when they died with a smirk on their faces.“We’ve got bigger problems,” Uriel warned. “The Infinity Gate is moving. In my dream, I must have … set it adrift.”“Can you stop it?” Kira was genuinely frightened. She hadn’t studied the artifact like Uriel had, but she knew well enough that it was capable of destroying Telara.“No. The dream, the rules … are gone.” The mage blinked as the gate shifted and surged overhead. “And it’s moving out of range.”Kira watched, disheartened, as the ancient God Engine lumbered across the sky, toward the sea. “Do what you can to prevent the apocalypse. I’ll handle the hard job.” Kira unbridled a fast crocnard and draped the fallen cultist across its saddle.“I’ll tell the Faceless Man that the dreamers have struck again.”

This was built up later in the month with this eerie report:

Tales of the Deep: Imaginary Threats

RIFT is setting sail for the planes in the upcoming Nightmare Tide expansion, but what awaits is still shrouded in mystery. Last night, leaders of the Ascended gleaned a first look at their destination (and the nature of its horrors) in a report from the Empyreal Alliance’s Commander Blaith. Her early findings, reprinted below, paint a haunting picture of things to come…

As Commander of the Empyreal Alliance naval defenses, I was charged with assessing threats from the Plane of Water, and my findings have been both mystifying and grim. A combination of exhaustive studies and first-hand battles show the realm poses an imminent danger to Telara … that seems to be constructed from the fabric of our dreams.

If that sounds as sea-brained as the mad god himself, please let me explain.

A recent incursion off the coast of Kelari Isle laid bare the power of Demogos, a malevolent beast from the sunken realm. He manipulated the dreams of scattered Wanton cultists, and it was in and through these dreams that they brought him a tablet used to wake one of the evils known as the Akvan.

Just how could these cultists stir phantoms to action in the sphere of dreams? For once, researchers at the College of Planar Studies and Quicksilver College agree: sleeping mortals resonate with Tidal energy signatures indicative of planar travel. In short: the unconscious hobgoblins of our minds walk in the Plane of Water while our bodies lie dormant on Telara.

This appears to fit with Demogos’s claim that he is not a dragon, but a nightmare – the embodiment of the fear and shame felt by the Wanton after their defeat at Mount Carcera. If we take this monster at his word, we must assume the collective fears of other cults are manifest in the Plane of Water … and are just as set on our demise.

These are dire tidings, for Arethea’s Song of Dreams implies that entities far more powerful than Demogos wander the plane of seas. Indeed, careful analysis leads us to believe the Akvan themselves may be nightmares come to life. Creations of something ancient, primordial, sentient … and seriously deranged.

Our best calculations point to a celestial body orbiting the Plane of Water as the likely source of the largest and most volatile nightmares. We are eager for Orphiel Farwind to weigh in on the matter, but all my attempts to meet with him have failed. There are many within both factions who now believe he knows more about this plane than he has published, and that the threat to Telara grows the longer he keeps this knowledge secret.

Telara has suffered much in recent wars against the cults, against the Legion, and against our own dead. I wish I could see end of our troubles on the horizon. Instead I see new expeditions beset by fresh terrors.

Unless or until we understand the phenomenon giving rise to new armies in the Plane of Water, I urge you all to prepare. Keep a journal of your dreams, share them with those you trust most, and rest assured you are not alone in what lies ahead.

What makes Patch 2.8 so much more exciting is that on the last Friday Livestream with Executive Producer Bill “Daglar” Fisher present on June 13th, he casually let us all know that there will be no Patch 2.9 before 3.0. 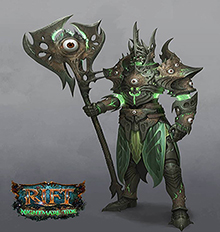 Are You Prepared to Dive Into 3.0?

Soon we will be exploring more in-depth details about what’s in store for 3.0 and also bringing tips to prepare for any expansion to assist your journey towards this momentous occasion, but for now here’s some inspiration from the Trion team on what’s to come including lurking bosses above, soldiers of Tribulation to the right, and weapon skins below (click to see the full-size version)!

Are you ready to keep up? 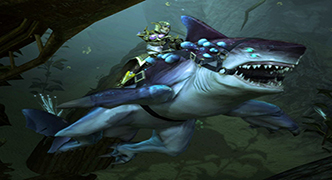 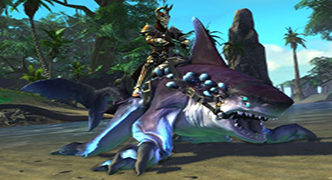 Let the journey to 3.0 truly commence!

Finally, don’t forget that until tomorrow, August 2nd, you can pick up Limited Edition Archeum Troves from the RIFT Store that rarely contain the all-new White Dire Riding Squirrel mount and the even rare Archeum Founder’s Packs which grant (nearly) instant Alpha and Beta access to ArcheAge plus a whole lot more!

The post RIFT: 2.8 News with Lore and Reports from the Depths of 3.0 appeared first on JunkiesNation.