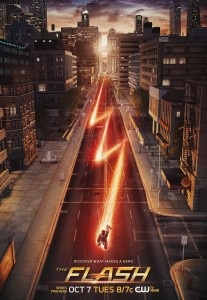 Tuesday night saw the premiere of The Flash on the CW, and it was a welcome surprise. The show’s origins on the network lie within the CW’s other DC show, Arrow, which visited Barry Allen and Central City for two second season episodes. From there, it would be easy to assume that this show would carry over DC/WB’s current dark-and-gritty method of adapting comic books. Instead, it seems more reminiscent of Sam Raimi’s first Spider-man movie, or later seasons of Smallville–with less cheesiness and teenage angst. Instead, The Flash promises to be the type of show a comic book fan deserves, managing to itself seriously while still holding true to its origins.

While The Flash is one of the better pilots I’ve seen and reviewed–largely helped in this aspect by it’s spin-off status–this doesn’t mean that it never faltered. Despite the fact that I think the writers should be applauded for having the gall to introduce Clyde Mardon/Weather Wizard in the first episode, the character felt flat. The problem of underdeveloped villains seems to be a pattern with DC-based television shows. However, this seems more permissible during the pilot–the focus of this episode was where it should be, developing Barry and his companions and introducing viewers to the Flash mythology. Weather Wizard played a role only in showing that The Flash was neither afraid of superpowers nor dramatic visual effects (and, thankfully, he was never actually referred to as “Weather Wizard.” The Flash’s Rogues have the most unfortunate names). 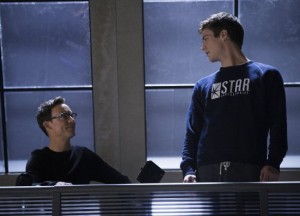 The plot of the premiere was basic, but executed well. The viewers are given a brief recap of the accident that gives Barry his powers (which occurred on Arrow), and then meet back up with the character once he awakens from a coma. It is immediately apparent that Grant Gustin, who plays Barry Allen, has grown into the role. He seems more confident and more at ease as Barry Allen. He still looks very young for a forensic analyst, but The rest of the plot is formulaic–boy discovers superpowers, super villain emerges, boy decides to be a hero, boy defeats super villain, boy pledges to use new-found powers to protect the world and solve his mother’s murder. You know. The usual stuff. Still, the episode was done well despite the fact that it followed an old formula, and managed to seem fresh while still familiar.

Jesse L. Martin (Detective West) and Tom Cavanagh (Harrison Wells) handle their roles as Barry’s mentors with finesse. Gustin is able to play a real “good guy” unironically, and is genuinely likeable. The rest of the cast also performed well, creating likable and interesting characters–with one exception. Through no fault of Candice Patton’s, though, her character–Iris West–is shaping up to be the show’s wet blanket. She seems doomed to follow in the footsteps of other comic book love interests, and may turn out to be the weakest part of the show. 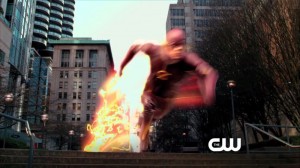 In short, The Flash holds the potential to be a great TV show. It has great characterization and excellent actors, rounded out by cinematography and special effects that really work well, especially for network television. Most importantly, though The Flash has a genuine feel that is sure to win over comic fans and general audiences alike.

The post Review: The Flash Pilot appeared first on JunkiesNation.