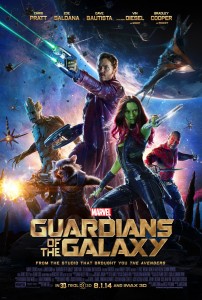 If there is one thing that Marvel knows how to do, it’s how to make a movie fun. And that’s what Guardians of the Galaxy is—a big ball of fun, excitement, and CGI explosions all rolled into 122 minutes. If you prefer for your comic book movies to be dark and gritty, a lá The Dark Knight series or Man of Steel, then this is not the movie for you. There are certainly times where the movie is doing anything but taking itself seriously. That, though, is part of what gives the film its charm.

I’m sure that you’ve already heard about how big of a risk Marvel was taking by making this movie. They decided to adapt a comic and a cast of characters—Peter Quill, aka “Starlord”, Gamora, Drax the Destroyer, Rocket Raccoon, and Groot—with which even some of the biggest comic book fans were unfamiliar. In retrospect, it seems to be silly to say that Marvel was taking a risk. All they had to do was inject some of the Marvel Cinematic Universe magic into it, bringing on the humor, excitement, battles, epic CGI, and appealing characters.

The best thing that Marvel could do with this movie is let director James Gunn have his own voice. The movie certainly stands out among the rest of the Marvel universe with the way it pokes fun at itself, fully embracing sarcasm and silliness together. Of course, Gunn is able to balance these lighthearted moments with ones highlighting real consequences, peril, and affection. While it’s true that GotG has moments where it doesn’t take itself seriously, it’s never insincere. 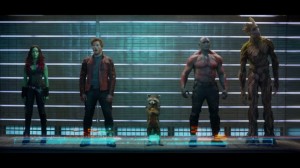 The second aspect that really sells this movie is the main characters. The supporting cast is excellent, and never makes a moment without the primaries seen too dry, too boring, or like filler—but the Guardians themselves really shine. The movie is about these individuals and their path to become a team. This isn’t a new story, and it’s not done in a way that’s entirely unique. Still, though, the main characters are so well portrayed that it’s easy to forget that we’ve seen the same storyline hundreds of times before.

That point is where the weaknesses of this movie come through. While many have been hailing Guardians of the Galaxy as the best Marvel movie yet, I think that there are a few points that prevent it from reaching the top of this list. First, the basic plotline is overly familiar and a bit cliché. Nothing surprising comes from the story itself, and the only surprising things come out of characters’ mouths. 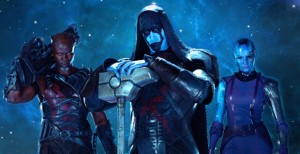 A second potential problem stems from the fact that the core of this movie belongs to the Guardians. As a result, the villains are underdeveloped and lack personality. There are five of them, and they’re pretty indistinguishable from one another. Honestly, I couldn’t tell you half of their names after the movie ended, and I was glued to the screen the entire time.

Really, though, these are minor complaints. The charisma of the main cast prevents these issues from hampering the overall effectiveness of the film too much. This is a movie about Quill, Gamora, Drax, Rocket and Groot—and they sell it. If you spend any time online, you’ve probably in an avalanche of references to Rocket and Groot. In my opinion, though, none of the main characters are left behind. Each gets his or her own time to shine and win over the audience. At its core, Guardians of the Galaxy is a character film. And it certainly delivers. Marvel recently announced that it is developing an animated series based on these characters, and I can’t wait to bring them into my home every week.

Guardians of the Galaxy may not be the best Marvel film to date, but I would wager that the majority of Marvel fans would place it in their top three. Once again, Marvel is able to take relatively unknown characters and turn them into stars. All in all, there’s no reason you shouldn’t go and see this film. It’s one of the best cinematic experiences this year has had to offer.

The post Review: Guardians of the Galaxy appeared first on JunkiesNation.