So we skipped a preview of the latest Pokemon games, Omega Ruby and Alpha Sapphire (ORAS). We unfortunately didn’t get review codes until release, and due to some staffing issues, I’ve been responsible for reviews while things continue to cook in the background. That being said, I was able to pull in some help from past guest writer T. Striker. It’s been a busy holiday season, so progress was a bit slow. In that sense, I think we can give a long term, quality look at the games, without the pressure of making predictions for what will happen down the line. Here’s our thoughts on the game.

Nintendo provided us with two review copies of the game post launch, so Striker and I were able to play together a bit onlline. While I enjoyed the X/Y, it was also obvious the series simply hasn’t been able to mature with me as well I’d hoped. Striker, though, was quite excited about playing the new games:

I get random amounts of down time, like taking a train, between classes, late nights on the couch, and not having a laptop with me 24/7 leaves me either on my phone or my 2DS. I really liked the last Pokemon: great story, learning curve wasn’t steep for casual play, and it was semi nostalgic. I wanted to get the new one even though I never fully completed Y (missing the Dragon and Mewtwo still). After I spent hours trying to get one of the legendary birds, it kinda turned me off from legendary catching and the hour window of finding stones daily wasn’t what I am getting on a game for. I thought the Mega evolution was cool too.

I had similar feelings, though I had skipped the birds and went straight for the big, bad legendaries… and never trained them. The stones were inconvenient to get with my work schedule, but overall, I’d had a good dose of nostalgia, but was hesitant to try the new games. Just the same, I had prepared a bit for my review.

In X/Y, I finally had a perfectly bred Froakie, plus the event Gengar, so I stat trained them. I forgot how much I hate that part of the game. I also tried the demo, which wasn’t bad the first two or three times, but it was so short and repetitive that doing it 10 tens to get the most rewards out of it really felt like a chore. Maybe it was more interesting for people who played the original Ruby/Sapphire, but I’d skipped most of the third generation, so I probably missed some cool nods. Seeing the same town in the released version was a little neat, but not enough to make me appreciate the demo. 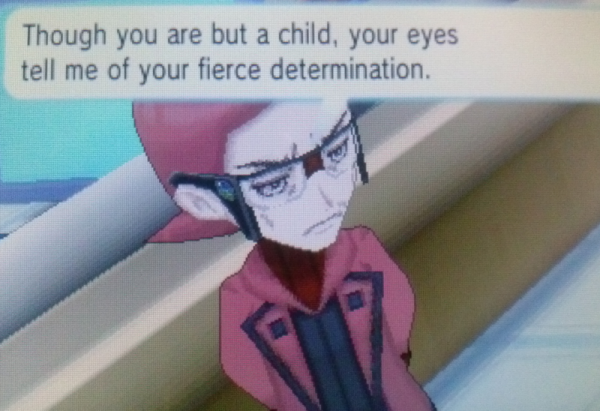 I have to say though, being able to prepare for Pokemon games is really nice, and with the ability to trade (what seems like) every generation now, I almost wonder if the series will keep pushing the “catch’em all!” goal. I’ll try to keep overall series comments to a minimum, but while preparing for the game, I had to question just how long Nintendo can push the formula. Perhaps this is why Nintendo’s had so many Pokemon side games, and why I’m looking forward to Pokken.

That being said, one thing that Striker and I both noticed as soon as the game started was the lack of clothing options from X/Y. Laugh if you will about two grown men playing virtual dress-up, but after several generations of essentially being a clone of your friends during battles, it was nice to see some variety. The fact that some features were cut and some added, in addition to a lot of resources being reused (not just art assets, but entire mini-games like the stat training), made it feel like the game could have been offered as DLC for X/Y as well. I would have preferred to just use my old character than the new one. Maybe this would have disrupted the story a little, but I’m sure Nintendo could have come up with something to fix that.

It’s not all bad though. You can now encounter specific pokemon in the wild. That is, you can see a tail or ears in tall grass, caves, water, etc, and sneak up on that pokemon to catch it.  Unlike previous games, I was slowly catching more of the same pokemon, which is more interesting than past games. Don’t get me wrong, breeding added depth to the game, but a lot of tediousness as well in my opinion, especially if you consider just how much modern games are simplifying their mechanics (yes, breeding has been simplified, but is still quite a learning process). The game is about catching them all, not breeding, and this new mechanic brings the catching back full force.

I almost wonder if Nintendo finally needs to drop the random encounters and focus on having pokemon just out in the world. As they add more and more pokemon to the physical game world, the game is starting to actually feel like an organic world, and now the random encounters are standing out to me. I mean, when you’ve got poke-gulls on the beach that run from you as you leave tracks in the sand, and some pokemon’s tail suddenly pops out of a bush, getting a random encounter suddenly feels… weird. It breaks the immersion of the game for me now, and honestly, immersion is a word I would have never used for past Pokemon games. They’ve generally felt artificial with a few exceptions. 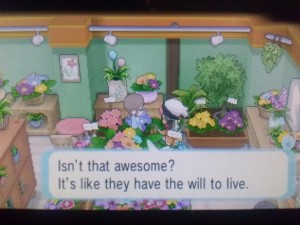 There’s a bit of a problem though: Striker and I have caught a lot of pokemon before. We even stopped trading some version exclusives because we already had them in X/Y. While the new system is more interesting than past installments, doing it again is quite a daunting task. There is so much to do in any Pokemon “end game.” I use quotes here because, luckily, the game lets you see a lot of long term activities well in advanced: contests, berry farming, base guilding, breeding… you have all of that in addition to the normal catch and battle. As I mentioned before, it took me quite some time to make a single (relatively) perfect pokemon. Doing it for a whole team seems pretty hardcore for me, though I have to admit this year has been busy and I’ve had a lot of reviewing and guide creation to do. Just the same, catching pokemon again when I’ve done it before just felt tedious, especially since you then have to level them up all over.

Some of the new features are interesting, but… well, maybe not useful enough for most people to care about. For example, I live in Japan, so I get a lot of Street Pass updates. I love the idea of secret bases, but most people don’t really do anything with their bases. I know at the start of the game, before getting fly, I’d make secret bases and lay down a bed just so I could have a pokemon center wherever I wanted. Once I beat the Delta episode (the final story arc for legendary capturing after you beat the elite four), I decorated a bit and looked for other bases. Most people, though, did little to nothing with their bases. The online communities really do more with them, such as making a place for people to more easily grind levels. If you live in the states like Striker does… well, you can sometimes be starved for Street Passes in general, much less quality ones.

While I handled bases, Striker hit up the contests and decided to use the cosplay pikachu. He was able to get to the master level easily since he could just use TMs to teach pikachu the right variety of moves to win. Each run was about 4-6 minutes, but it was mostly just watching the game and not much interaction. I felt the same way, which was one reason I’d only done a few contests.

While there’s a lot to do in the game, at the end, I was kind of… done. No, I didn’t breed or catch any new perfect pokemon. My secret base team could be a higher level, I could catch more legendary pokemon (this game gives you access to so many!), farm berries, beat contests, level pokemon but… why? I’ve done this so many times before, even stream lining it doesn’t make it that much less daunting. While it’s cool to have daily and weekly activities, after having done them in previous games, I just feel overwhelmed, a word Striker used often whenever we discovered a new, full feature or sometimes town. Yes, you can keep importing pokemon from past generations slowly but surly, but that takes a lot of time. Preparing to play the game isn’t as much fun as just playing it. While having random battles with people on the trains using a level 50 level scaling system makes things a bit more fair and accessible, it’s a bit too familiar to me.

I’ve complained a lot, but both Striker and I did enjoy our Pokemon ORAS experience. In fact, if I hadn’t played X/Y, I think I would have enjoyed it more. While the last generation had a great nostalgia factor, the newest games’ additions really made the series feel more alive for me. If you’ve never plated a Pokemon game, this really is the best one to start with. There’s a lot, but I think it’ll feel fresh and exciting. For anyone else, you really do have to like the current game’s formula to enjoy doing it again and being happy with your purchase. For everyone else, the game’s good if you’re on a budget or find yourself with a lot of time but maybe little internet access.