As an internet SJW (Social Justice Warrior), I have always been interested in the intersection of contemporary race and gender issues. And as a gamer, my nerd drive reaches maximum capacity when these issues become mediated through virtual worlds. This article will focus on one such mediation, where race, gender, and gamers collide in the virtual space of Campus Life.

Campus Life is a mobile game developed by Pocket Gems, a San Francisco mobile gaming startup. If I were to place this game in a gamer’s evolutionary tree, it would sit firmly in the family of simulation games, of which The Sims acts as archetype. Campus Life is thus a sorority sims game, where players build a nascent sorority by recruiting pledges, building the sorority house, and hosting numerous social events. 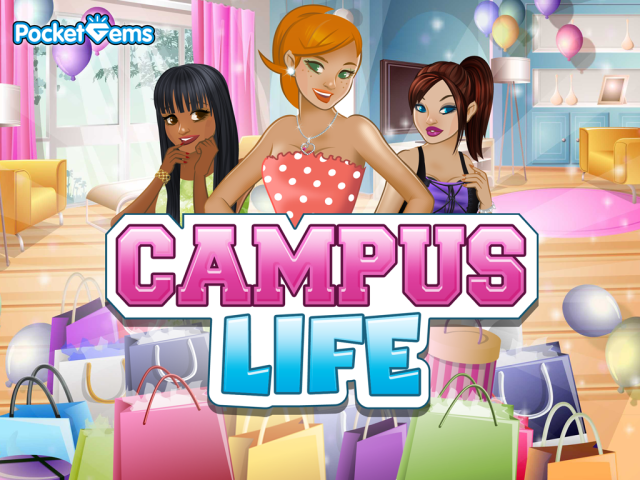 The game itself operates primarily on three scales;

In terms of revenue, the game relies on the typical hard/soft currency system of F2P mobile games, in which players can accrue virtual cash freely in game to spend on furniture and clothes, while more prestigious items can only be acquired through diamonds (and diamonds are earned two ways; you either buy them with real life cash, or earn very small amounts through completed quests).

Upon playing the game for the first time, the gamer is asked to create the founding member of the sorority. The character customization for this is pretty diverse, relative to other games, and allows the player to select different hair styles, hair colors, and skin tones. For me, I chose to make my president black with dread locks. Her name is Lucia, and her parents immigrated to the United States from the Dominican Republic. She is majoring in biology and is currently working on a summer research project involving zebra fish and epigenetic mechanisms of disease. 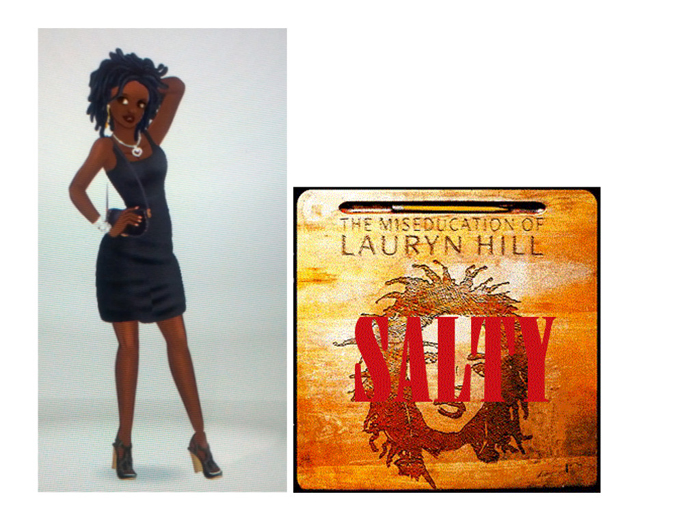 My sorority founder and president, Lucia. With dreadlocks so good Lauryn Hill gets Jelly.

One feature that players can unlock as they level up is the ability to enter into international modeling competitions. Players can select a member of the sorority to register, and then choose different clothing and accessories to best match the particular competition theme. When this is done, the player is placed into a contest with a competing sorority, and the playerbase votes on the best dressed contestant. There are a few other variables involved in the process, but I won’t expand on them here.

Before I continue, I should note that I have a history of winning virtual fashion competitions. I first realized I was really skilled at character design while playing the MMO City of Heroes. I spent most of my time in character creation playing around with the art assets created by the developers. Unlike the majority of that playerbase, my heroes and villains were not a hot mess of rainbow vomit. They were boss, and I always won any costume contest I came across while flying through the main city.

With my impressive qualifications laid out, I will now address the problem I have run into with Campus Life. I am speaking specifically of bias in the playerbase. Lucia is my go to gal for fashion shows, and after a number of contests I began to discern a pattern; despite my impeccable fashion sense, Lucia would always lose. It wasn’t until a particularly egregious loss that I worried it might be because she was black. Case in point: 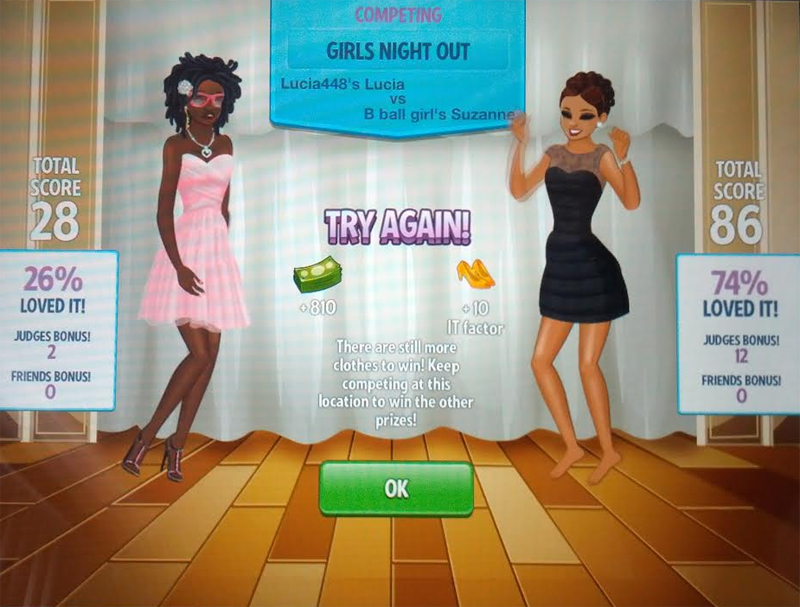 The competition theme is “Girls Night Out,” and Lucia is dressed perfectly for it. The competition to the right, however, is a hot mess. Allow me to break it down. Lucia is seen here in a combination of pink and white, colors that represent both femininity and innocence. Lucia’s rich black hair is highlighted by the black heels, and the white flower and necklace add a layer of juxtaposition and complexity. The pink glasses, nail polish, dress, and studs in the heels are the centerpiece of this ensemble.

Now let’s look at the competition. A girls night out is not about competing for and hooking up with hot guys, but about getting together with your girlfriends to talk, drink cocktails, and have fun. A tight fitting black dress doesn’t really mesh with the theme. But the dress isn’t my problem. It’s what is beneath the dress, or rather, what isn’t. Time for a side by side comparison.

In what universe does someone with NO SHOES beat me? It isn’t just that she beat me, it’s that she did so with no shoes and with 74% OF THE VOTE! I don’t want to come across as bitter or anything, but a closer examination of her feet also reveals a bad case of foot fungus. 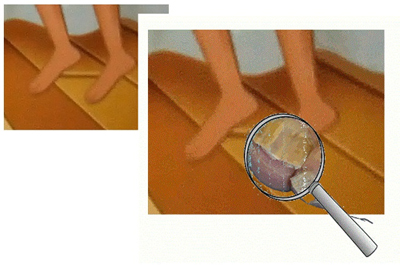 I should stress that my methods are entirely anecdotal; though I would love to make inferences based on measurable patterns in player behavior,  I simply do not have access to the data necessary for that kind of quantitative analysis. I was once, however, an archaeologist, and that’s a group that gets happy when they have a sample size of 2 (you’ll take what the ground gives you and like it!).

This was the second time Lucia lost a fashion show. Unfortunately, I did not take pictures of the first one because I wasn’t expecting losing to become a pattern. Trust me when I say the other girl had no business winning, either. I also had my doubts for the third loss, and fourth loss, and fifth, etc. My experience with these fashion shows caused me to consider something I had never actually thought about before; namely, that historical biases in our contemporary society could be transmitted and reproduced in virtual worlds by the player.

My traditional critique about stereotypes and lack of diversity in videogames had exclusively been reserved for developers (looking at you, League of Legends). But in Campus Life, I found that Pocket Gems enabled and encouraged diversity within the sorority by including art assets for darker skin tones and black hair styles, and by randomizing all of these phenotypic characteristics in the pledges the player can recruit. In other words, the game itself does not privilege characters for looking certain ways (with the exception perhaps of being thin).

This forced me to reflect on the possibility of the players themselves operating in ways that transform the mechanics of the game into tools of discrimination. It is not just Lucia’s clothes, shoes, and accessories being judged in the fashion show, but also her skin color and hair. When Lucia is put up against a blonde, I know she will lose regardless of any other variable–it just doesn’t matter how much effort or energy I put into the outfit.

I am thinking here of the person that says, “Lucia’s outfit is really nice, but there is just something about her. I don’t know what it is exactly, but I’m just going to vote for the other girl because she looks so pretty.” In other words, it is not a blatant form of bias, but rather a function of tacit assumptions that serve to privilege some people over others. I am speaking more or less of a virtual version of this blog post from the BBC. My hope is that players themselves become more aware of why they make certain choices over others. What is the rationale for a player’s decision to vote a certain way? I am perhaps at the limit of what I can say because I don’t have access to player data, outside of my own experience.

On the bright side, ruminating over the last few days on this experience in Campus Life, I am reminded of just how powerful games can be for making positive social change. Lucia’s losses feel like my losses. Her losses are not something I read about in a blog or in a novel. They are something I personally experienced, and because I lost out on the rewards of victory, they had consequences that I actually felt. For a “casual” game, Campus Life is surprisingly efficacious at developing in me a sense of empathy–something sorely needed in our jaded and conflict filled world.