It seems as though there is always fervor on the internet, and most recently this has been surrounding Marvel’s recent announcement of the changes in their Avenger’s lineup. Comic book fanboys (and those who appreciate the Marvel cinematic universe) were surprised to hear that the company had made significant changes in two of their titles—Thor and Captain America.

You may have heard the complaints that Marvel’s made Thor into a girl and Captain America is now African-American—but these complaints aren’t entirely accurate, so let’s clear that up before we move one. Marvel hasn’t decided to re-write these characters (as, say, DC did when they decided to give Amanda Waller more sex appeal). It’s just that Thor and Steve Rogers are being replaced by other characters, who will carry on their mantels. Thor has become unworthy to wield Mjolnir, so he is being replaced by a yet-unnamed female character. She is now worthy to wield the power of Thor and, thanks to some tweaks of the Thor myth, now carries his name. As for Cap, Steve Rogers is experiencing some dramatic effects from his super-serum, and is aging rapidly as well as losing his powers. His friend (and the Falcon) Sam Wilson is stepping in to fill his shoes.

Those who support these changes—mostly in the name of diversity in comics—point out that Thor and Cap have been replaced before. Bucky Barnes, another friend, took Cap’s mantle when Rogers was thought to be dead. Thor has been replaced by a horse-like alien named Beta Ray Bill. It can’t be any stranger to replace him with a woman, can it? The comic book universes are lacking fully representative character, and all steps toward remedying that are good steps.

While debate on the internet seems to be dramatically split between those who love the changes and those who hate them, I want to point out another potentially valid criticism. As a woman who reads comics, I feel like I should have been thrilled that a woman was going to replace Thor. I wasn’t, though. If anything, I rolled my eyes—and I became even more cynical when the announcement on The View was followed by the Cap announcement on The Colbert Show.

I’m definitely a supporter of diversity in comics. I sometimes get overly vocal about it. Two things, though, struck me when these changes were announced. The first was that these were going to be very temporary changes. They revolve around two of the most famous Marvel characters—both of whom have been replaced before. I expect somewhere around five issues each for both our new Thor and our new Cap. They may stretch the changes into a year, but I doubt it will go much longer than that. Are temporary changes like this really supporting diversity, or is it just throwing a bone to those who want it. I feel like Marvel is getting ready to say “Remember Cap and Thor? Now you can’t say anything bad about our diversity for a long time.’ 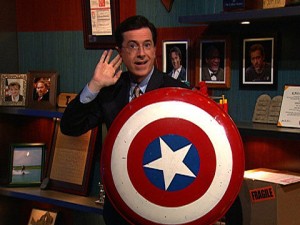 The second thing that struck me was that Marvel seemed to treat these like gimmicks. They made these announcements on two popular and strategically chosen TV shows. Due to the fact that they’re likely to be short-lived, it seems like a publicity stunt. If Marvel really wanted to support diversity, why not increase the roles of many secondary and tertiary characters (who are more diverse than our main hero line-up)? Why choose temporary changes, unless you don’t truly support them?

I can’t help but think that when they make changes like this—especially with Thor—they’re not looking for diversity. They’re looking for publicity and sales. Especially when they announce these changes in a media spectacular. So I say to the fanboys—don’t worry. It’s not going to last. And to those who support an increase in diversity in comics, well, we still have a long, long way to go.