Consider this part two to my experiment in introducing people to MOBAs. As fun as Heroes of the Storm was, the community outside of the forums was awful. Much like my thoughts when playing Starcraft or other Blizzard titles aside from Hearthstone, I felt that the game’s community really prevented me from enjoying the game.

That’s when I remembered Solstice Arena. Though it’s primarily made to be a mobile MOBA, the team’s made it playable on PC as well, and A Bit Lucky’s metrics seem to indicate that no platform gives players an edge. I’m not the best MOBA player, but from what I’ve experienced, being on a PC doesn’t feel like it gives me a huge edge, and neither does playing on my Windows tablet.

What makes SA different from MOBAs are a few things. First, there’s one lane. Second, there’s a treasure chest in the middle that, yes, gives your team money. Your character only has 3 moves, but they’re all available from the start of the match. The map is small, so there’s no recall, no jungle, and no minions. There’s still three towers, but in a triangle formation in front of the base, not in a line. It’s a three versus three match, with battles lasting five to twenty minutes, though on average, probably closer to eight to twelve minutes. It is a Zynga game, so everything’s monetized, but at least for me, I never felt like I had to pay to keep up with other players.

I don’t often play MOBAs too long after I do a review, but SA is one of the few that I revisit in my spare time. One reason for this is the complete lack of chat. Maybe it’s because this is a mobile title, but even on PC there’s no chatting. Instead, the game has a smart pinging system. Pinging your tower means to defend, pinging a damaged ally calls for a heal, pinging behind you signals to retreat… you get the idea. You can communicate just enough to work as a team but without worrying about anti-social gamers who don’t understand that bashing their team mates doesn’t help them play any better.

However, the game was also built for Apple products. I’ve hated Macs since I was a kid, and disliked how often new iProducts came out, so I don’t have any. In fact, after trying out Solstice Arena on an iPad, I had to live without it until it was released on Steam, constantly heckling the devs to port the game to a platform I and the other Apple haters could appreciate. Just the same, I thought for this article, I should use a gamer who buys Steve Jobs’ babies. Enter Eric.

Eric’s more of a mobile gamer these days, especially trivia based ones like Words with Friends. When he has time, he’s into RPGs. Nintendo games, especially Mario and Zelda, are among his favorites, which means his online game time is generally restricted to a small device. However, Eric specifically said he doesn’t communicate much in the games he plays because they’re not really team based or need coordination. He’ll give compliments, especially if playing with friends, family or co-workers, but generally, he plays for short bursts of time for a few weeks/months before moving in to something new. That being said, after his tutorial experience, he was anxious to try playing with/against people. At the rate MOBAs come out, he certainly could become a MOBA man if they followed the correct recipe.

To note, Eric was a complete MOBA newbie. Oh, he’s played Unreal Tournament and Quake 3, so it’s not like we threw a Tetris master into Titanfall, but just the same, the mechanics and team play are different.

Solstice Arena’s tutorial was enough to give to teach him that towers hurt and to kill the main base or “oracle.” However, it didn’t mention the “alert team” button. Once he discovered it though, even with bots, its uses felt natural, which is interesting since Eric doesn’t usually communicate with other players in the game, preferring to simply experience the game with other people physically around him. 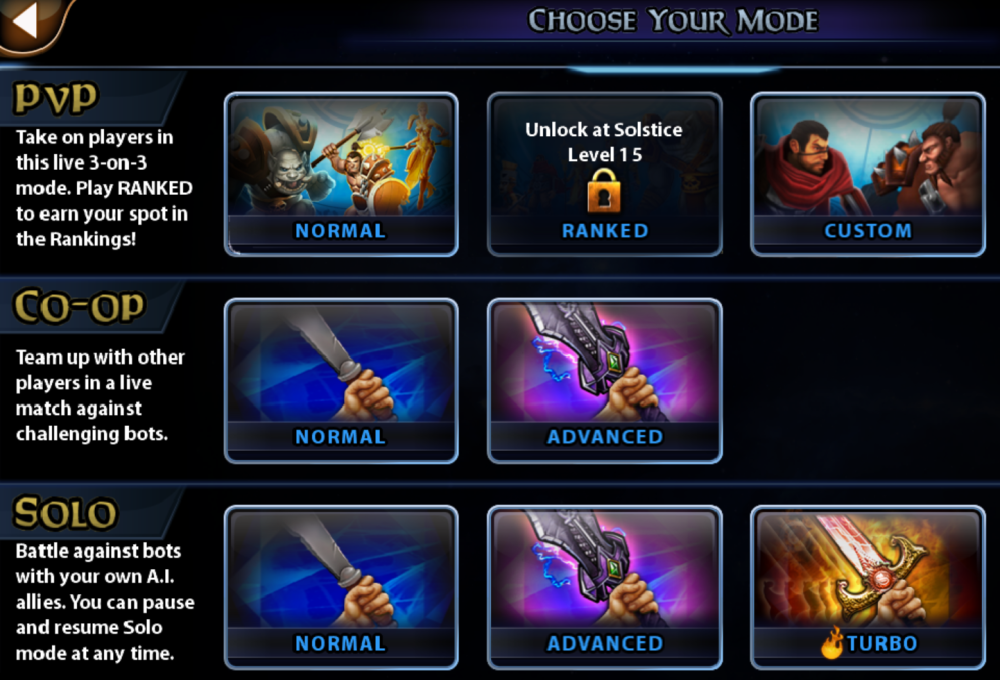 While AI isn’t the best, beating it did boost Eric’s confidence, and he still learned from being forced to play bot games at the start (before reaching level certain level, you’re restricted first to all bot matches, then PvE matches before finally being able to PvP). For example, Eric initially would allow himself to die so he had time to shop, but eventually simply used the “auto-buy” button so he could go to the base, heal up, and get back to the action. This is all good stuff to learn before jumping into the game with other players since in any other MOBA, Eric would most likely be told to uninstall the game, rather than receive advice on optimizing his time/strategy.

However, going into the game’s PvP changed everything. Choosing to skip human vs AI matches, Eric went straight from bot PvE to PvP, something many veterans may caution against but many solo players do. Match making systems take awhile to perfect, but Eric simply mentioned that he felt outclassed:

I could hardly get near an enemy before they ran my life meter down all the way and killed me. I’m playing as the barbarian and he has one slightly ranged attack, but you still have to be pretty close… I think I’d need to level up a lot more to feel comfortably  (sic) playing against randoms.

While he did mention going back later to try a spellcaster (Kyra), this ultimately lead to Eric retiring from the game. Part of the problem was having to level another character; he’d become attached to Hammhock, the above “barbarian.” And that’s understandable. It’s part of the stickiness of games. You want players to be attached to their characters. Often times, you also want players to become attached to more characters so they don’t get bored, but it doesn’t always happen. 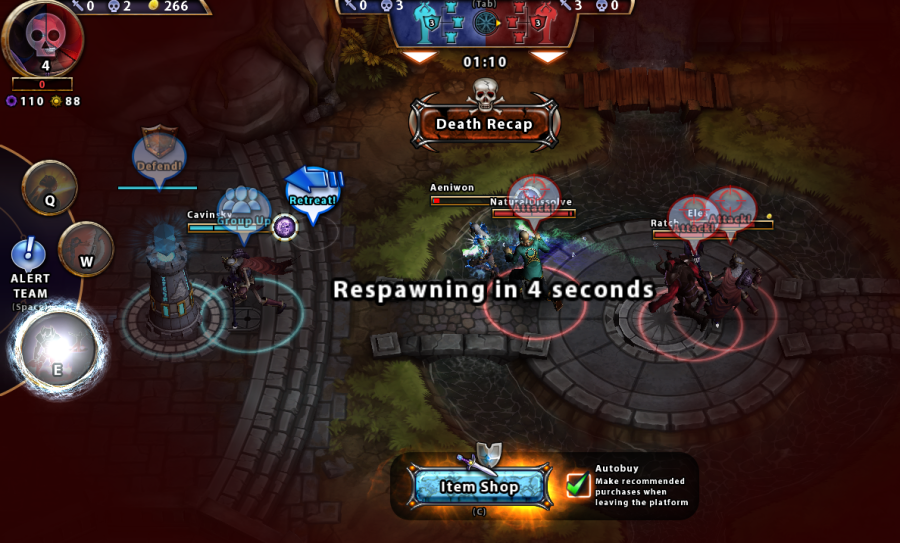 I also want to address Eric’s chose to skip from PvE to PvP. While it seems like a mistake, it was something a few people brought up to James Striker in the first article, except that they told him to go back to it.

On the one hand, companies could make these modes required. However, on the other, some players see this as a tutorial and want to experience the real game, and I have to agree. While losing does suck, the very basic problem is that many moves have to be used in totally different ways between  AI and players. I’ve played League of Legends with people who mostly loved the PvE aspect and were quite good at it, but truly awful in the PvP maps because they didn’t understand how to use their attacks against a real player (let alone understand tactics that real players employ). In this sense, I feel like skipping PvE is the lesser of two evils, since a new player will expect to lose more than a veteran, but the veteran in one game mode will expect to do well in another. This latter train of thought may work in games where character power is king, like many MMOs, but MOBAs are more skill oriented, which was probably another issue Eric ran into.

With all that being said, I do wonder if SA really is the best game to use as an introduction to MOBAs. While Eric certainly learned that living is better than dying, he didn’t learn about jungling, laning, or last hitting. However, those were kind of removed from Heroes of the Storm, so perhaps we’re seeing a shift in the genre, or at least, know which parts to cut when trying to bring in a broader audience.

The other part is that Eric played SA on his own. Alone. Due to his busy schedule and me… well, living in Japan, coordinating a time to play together was difficult. As well, as Eric noted, players tend to pick up games randomly and meet people in that game. I know that’s been my current situation, in that I’m picking up games I’m interested in these days rather than what friends are playing because I don’t have time to experiment with games I “might” like (except if it’s for work). In my free time, I just play what I like. My writing is a side job. I assume most adults who play games without getting paid for it are the same situation though, choosing what they want to play before opting for something a friend’s recommended that’s outside their comfort zone.

In that sense, Heroes of the Storm may have the advantage, in that Blizzard makes high quality games people usually buy/play anyway. However, mechanically, if you can get your friend to try Solstice Arena, the game does seem to motivate people to play on their own to learn at least the bare basics, which is something many MOBA vets want from new comers anyway. The overall issue is that both groups seem to forget is that the core of the game is also the best training mode: PvP. Losing is part of learning, and while losses for me in SA are just right, apparently my sentiments were shared this time. There’s always another MOBA to explore though!