During yesterday’s Public Test Shard update, we saw some interesting items arrive in the RIFT Store’s wardrobe section as well as a preview of the new Mayhem in Mathoisa achievements that will be brought to live shards beginning October 4th when the event goes live. The new RIFT Store items were mentioned during a Trion live stream a few weeks back where the team showed off a few of the goodies headed our way for Autumn Harvest this year. The new Autumn Harvest items aren’t on the PTS yet, but if you ever wanted to dress up your character as a ninja or assassin type of hero, you might be in luck.

Let’s take a closer look, shall we?

For the upcoming Mayhem in Mathosia event beginning this Friday, October 4th and ending Saturday, October 12th, we’re going to be seeing four different phases that bring us to different zones and award separate goodies as well as offer a new quest and a new possible achievement. Here’s a preview: 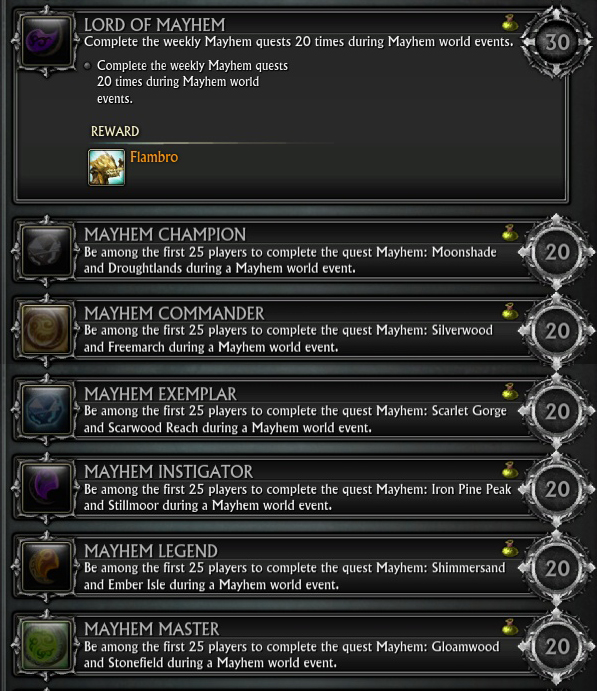 For completing the weekly Mayhem quests 20 times, players will be awarded with the “Lord of Mayhem” achievement and a new companion pet– the Flambro (do you even flambe, bro? Sorry, I had to).

The first 25 players to complete each of the phase’s new quests will receive an achievement. Each phase has its own. There are four achievements for each of the phases as well as two more for Shimmersand/Ember Isle and Iron Pine Peak/Stillmoor. These last two are presumably part of the next Mayhem event (hooray for more Ember Isle!). Each of these achievements rewards a Crucia’s Supply Crate. These are listed under the World Events achievement category.

For the final phase of the upcoming event, we’re also going to be seeing a new zone event:

Next up, here’s a preview of the new Shadow Assassin Costume Bundle previewing on the PTS: 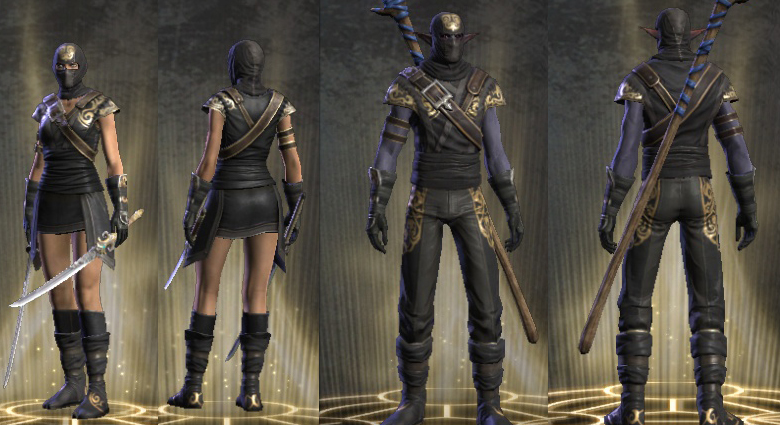 It costs 1606 Credits and includes the chest, legs, boots, gloves, and helmet. Swords are sold separately!

Speaking of swords, there are four new one-handed sword weapon skins coming soon. From left to right below, they are the Wind Edge, Silver Wind Edge, Storm Edge, and Silver Storm Edge:

The differences between each are minor and essentially give the hilt and blade a different hue. The Storm Edge and Silver Storm Edge have a hilt that’s a little differently shaped as well. Each one-handed sword costs 360 Credits. Since they’re skins only, they’ll of course need a Transfiguration Bauble (or two for dual-wielders).

Each costs 675 Credits. You can see the detail a little better on these larger versions. You’ll need a Transfiguration Bauble here, too, of course.

Finally, remember when this little gem showed up on Trion’s Vine page last week? We’re getting a new dance move, and it’s currently purchasable on the PTS. As Daglar hinted, it is indeed a victory dance: 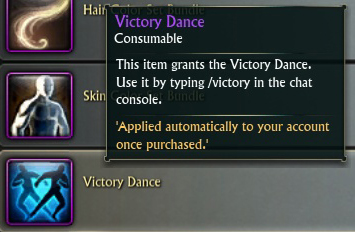 It’s viewable under Services, costs 360 Credits, and looks to be account-wide once purchased. Similar to how the store-bought emotes work in SWTOR currently, you’ll be able to fire it off by typing /victory into your chat bar (or by making a macro).