There has been talk about a new RIFT 2.6 feature in development called Bounties, but aside from a brief mention during a recent live stream as well as the fellow in the header image and an achievement appearing on the PTS, we haven’t heard too much about what Bounties actually are. Kerilar then teased us with a duo of images on Twitter (more on these later!) and followed up with some details on the forums regarding what exactly we have to look forward to:

Whenever you kill an NPC that gives you experience (barring critters since you never do) they will have a chance to drop a special artifact pertaining to that creature type. These artifacts go in new collections called out with a specific naming convention. For example: “Bounty: Air Elemental”.

Handing in a complete set to a Bounty Hunter NPC will further your Achievements for Bounty Hunting. Each Achievement rank grants you a Title, some unique items (including Animal Calls, Mounted Trophies for your Dimensions, and a unique cloak), and access to a special vendor who will sell some interesting potions.

Pretty simple and straight forward! I have some further ideas for later so you may be seeing more Bounty content at a later date, but for now, there you have it!

He then followed up this post to add that all creatures of a given type/race, no matter their exact model, will have a chance to drop artifacts from that set. These artifacts will be both tradeable and salvageable in the new Dream Weaving crafting profession.

There will be a full set of achievements (totaling 130 achievement points) for turning in Bounties. The first one is on the PTS currently and begins with one Bounty completed:

This prelude achievement grants the title of “Initiate Bounty Hunter”.

Now, onto those teaser images! Here is an image of some of the mounted trophy rewards that will look right at home in many of our dimensions:

Finally, a concept artwork of the unique reward cloak (click on the image to bring up the full size version): 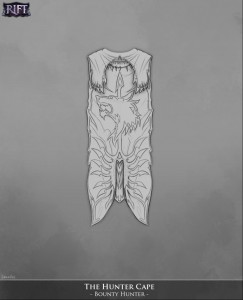 RIFT 2.6 is looking to be quite the update.