Back in March of this year Tom Abernathy, Riot Games’ narrative Lead, and Richard Rouse, a design lead for Microsoft Games, ruffled more than a few feathers with some comments made at the annual Game Developers Conference. Abernathy’s most memorable statement, “Plot is highly overrated,” made headlines throughout the gaming world. His words provocative not only for the League of Legends community, but for many other gamers as well. Now, a few months on, as we find ourselves on the eve of Riot’s next major lore reboot and subsequent retconning, it seems an auspicious time to explore this discussion a bit more, particularly for LoL, but other games as well.

Abernathy’s seemingly spurious proclamation attacked  what some gamers find so essential about the medium: the fantasy. For the LoL community—which had already struggled with Riot’s handling of lore—there was a clear sense of frustration. It struck a nerve because Riot had fumbled in previous years to make lore a compelling part of their game. The LoL universe has always been a little bit thin; a skeletal framework at best. Each character that populates its universe adds a bit more dressing to the frame: they each come with their own short backstory. But, it’s hard not to see the bony scaffolding peeking out from underneath. For some, the characters are enough; for others, LoL needs more to engender their sense of fantasy.

In order to flesh out its universe, Riot briefly (for about one season) ran a serial publication called the Journal of Justice. Writers for the journal took characters from the game and framed them in a larger storyline that attempted to make the game feel a bit more dynamic—a bit more alive. The journal was discontinued in January 2012. Although Riot claimed to be looking at ways to bring the narrative back, we are quickly approaching three years on without an answer to how narrative will be handled. Certainly with Abernathy’s recent comments it seems highly unlikely that it will play a prominent role in LoL in the future.

Though, the point here is not to bemoan that loss. That’s something I hope people got out of their systems months ago. But, Abernathy’s statement has some real gravity to it and deserves more than just a few forum flames. The statement commands attention not merely for being provocative, but because it is inextricably linked to what is arguably (though is there really any argument at this point?) the biggest game in the world.

The first thing to get out of the way is that by and large the quote was taken somewhat out of context. Does it stand alone? Yes. But, it also has a place within a much larger talk entitled, “Death to the Three-Act Structure!”. The presentation is critical of the way which plot is conveyed—most obviously the three-act structure, which has been kicking around since at least the Greeks. Do you tire of Hollywood’s repetitive summer schlock? The three-act structure has more than a little to do with that. Abernathy’s conclusion that “In games, plot is highly overrated,” is an attempt to understand games as something not necessarily adaptable to such a structure. Or more precisely that, in Rouse’s words, “Game stories are NOT about structure.”

Their conclusion points away from the comforting structures many of us have, knowingly or not, become used to in our media consumption. But, why doesn’t this structure work for gaming? The most compelling evidence that Abernathy and Rouse offer in their presentation are the abysmal completion rates of games: statistically, players often never make it to the end. They cite statistics that say, depending on the game, completion rates hover between thirty and fifty percent. What is the point of that mind blowing dénouement if half (or even more) of your players never see it? Instead, Abernathy and Rouse insist that the emphasis should be on characters and user experience. 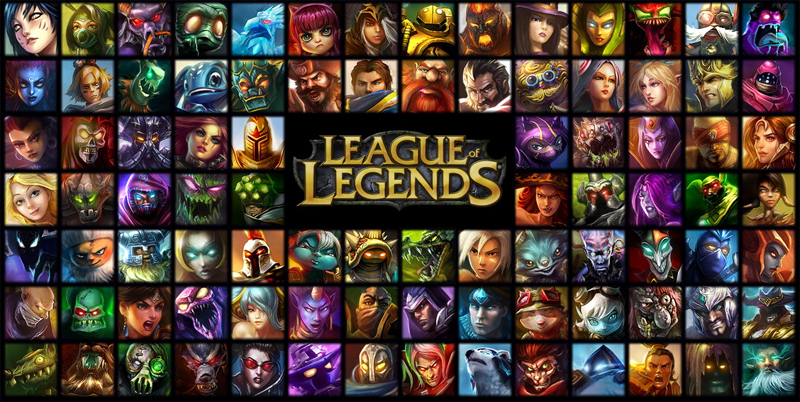 Now, characters are something that LoL has in abundance. They are, since the Journal was dissolved, the primary, hell, only way of conveying story—the fantasy, as it were. Playing a character should excite our own fantasy. In fact, these are words that Riot has tried to instill as part of their design mantra: “Every champion in League of Legends should represent an ideal power archetype (or fantasy).” Do you want to be the big, chemically tweaked, muscle-bound freak that can run right in the middle of the battle? Take Dr. Mundo. Do you want to be a lithe, high mobility marksman with an awesome bird? Take Quinn.  But, the fantasy of the character is not just lore; it’s also play mechanics. What makes the lore come to life is how you play the character. For most casual gamers, the fantasy of the character is multifaceted: lore, art, and mechanics.

What better way to engage with the player than by putting the characters and their stories–the fantasy– directly into his or her hands. “Death to the three-act structure!” rings true in its insistence that game developers should reevaluate how players engage with plot if it is to have any real value. A particularly insightful observation that Abernathy makes is that even when it comes to movies and television our viewing patterns have changed.

Perhaps the most popular and critically acclaimed form of the past ten years has been the serialized TV drama—The Sopranos, GoT, etc.—a form that Abernathy sees as more helpful to understanding narrative in games. Certainly with DLC becoming more normal, and particularly with LoL—which depends on installments of new characters on a regular basis—we have come to expect our games in smaller chunks that can be consumed in more manageable pieces and with more control over our time.  Our entire culture of media consumption has changed very quickly and games have to change too.

But, despite much of the talk’s tremendous insight, there still remains for me a nagging suspicion about its conclusions. In the next part I will talk about how LoL‘s status as the major esport in the world is important to this discussion.

The post League of Legends: “Plot is Overrated” Revisited appeared first on JunkiesNation.