Hearthstone‘s first new set of cards came out on July 22 bringing with it 30 new cards, though bosses get their own new cards as well that aren’t available to players. Based on World of Warcraft‘s Naxxramus raid, the game added “solo adventures” for players to play against AI bosses in order to earn new cards through different challenges. Within hours there were several guides to understanding and beating the first wing of five (the first one is free for now, so pop into the game to claim it!). I even found one that talked about clearing the heroic version of the final boss!

You may notice a bit of a pattern: most people are suggesting players use “zoo”  or “aggro” decks, which are decks that focus on cheap, hard hitting creatures and ignoring your enemy’s minions when possible to burst your enemy down as fast as possible. Why is that? Well, if it wasn’t obvious from the unique boss cards, the boss powers are also incredibly broken. Were these not theme decks limited to the AI, the game would quickly become imbalanced. Just the same, these powers have a few weaknesses, but the best way to avoid them and the overpowered cards is to end the match as swiftly as possible.

However, if you’re here on Junkies Nation, you’re not just here for guides (I hope), but for experiences. I’ve played a few Trading Card Games (TCGs), but I’m no pro. I’m probably about average, especially considering that I play a lot of different games in addition to having a day job and a few side jobs. To be frank, I’ve got some decent knowledge, but execution is always the key, and when you’re firing off an off-hours work email while trying to decimate your opponent in the arena, things can get complicated. So, without further excuses, here’s what I experienced when I first started up Naxxramas.

The very first thing I noticed was that “Solo Adventures” replaced the “Practice Mode” button. We’ve started out with Naxxramas, and I’m sure there’ll be more dungeons in the future. We only have Normal mode unlocked, but there are challenges with prebuilt decks you can unlock when you beat normal mode (which unlocks class specific cards), plus you can also do Heroic mode. There are 3 bosses to tackle and… well, to be blunt, I did Naxx in WoW when it was released in Vanilla WoW, then jumped in when it was rerelased in Wrath of the Lich King. The bosses are too familiar to me, so I wasn’t excited about the theme, but the idea of new cards is a strong one. 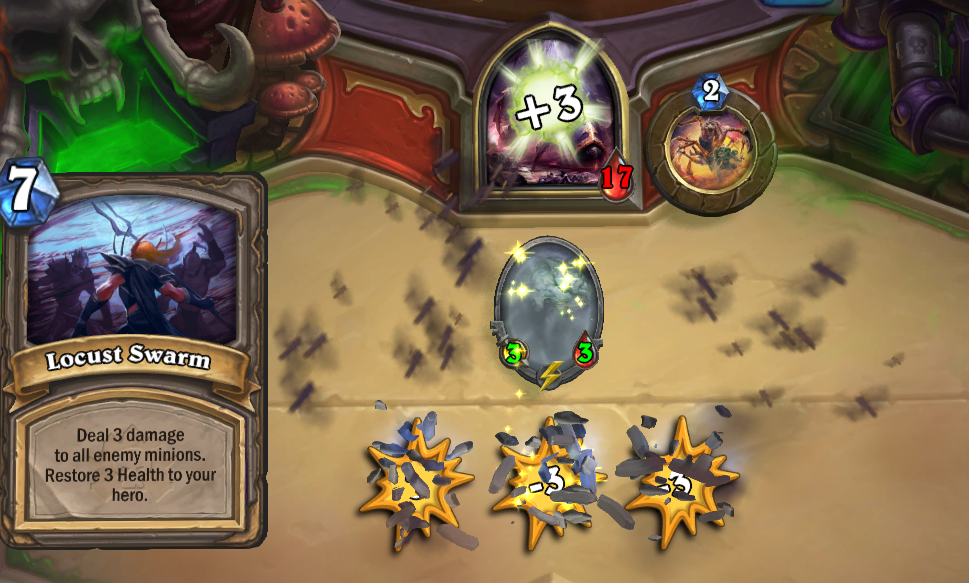 The first boss, Anub’Rekhan, summons a 3/1 bug as his hero power. The deck is aggressive with lots of board clearing. Watch for Locust Swarm, his personal unique card that deals 3 damage to all your minions while giving him 3 life. The deck feels almost like the warlock deck, and even has some lock cards, so there is certainly the desire to burn him down quickly. The AI on normal mode doesn’t always play the smartest, but it’s still tough.

Decks that I can usually win with against players (which tend to run a strong mid or late game while defending against the very popular zoo/aggro decks) just can’t keep up with the aggressive nature of Anub’s deck, though my druid deck was able to win, most likely due to its mix of control and larger creatures for mid game. As a quick heads up, Anub’s Ambusher‘s deathrattle doesn’t kick in if you clear the board and another deathrattle summons something, much like if you wipe the board against a Cult Master.

Around 3pm PST, the game got super laggy. It was playable, but turns were minutes longer than needed. Never thought such an issue would happen with the single player aspect of the game. Luckily, I was able to restart the game whenever this happened to make the issue go away.

The next boss, Faerlina, deals damage randomly for each card in your hand as her power. It’s painful, but while other people complained about her, I dropped her easily the first time, without getting an awesome draw, with an enrage warrior deck (no legendaries). Cheap spells and mobs, hard hitting creatures, and focusing on mostly killing her while keeping a low hand lead to my success, and warrior decks are pretty good at that (though usually it’s why they’re painful once you leave the early game behind). 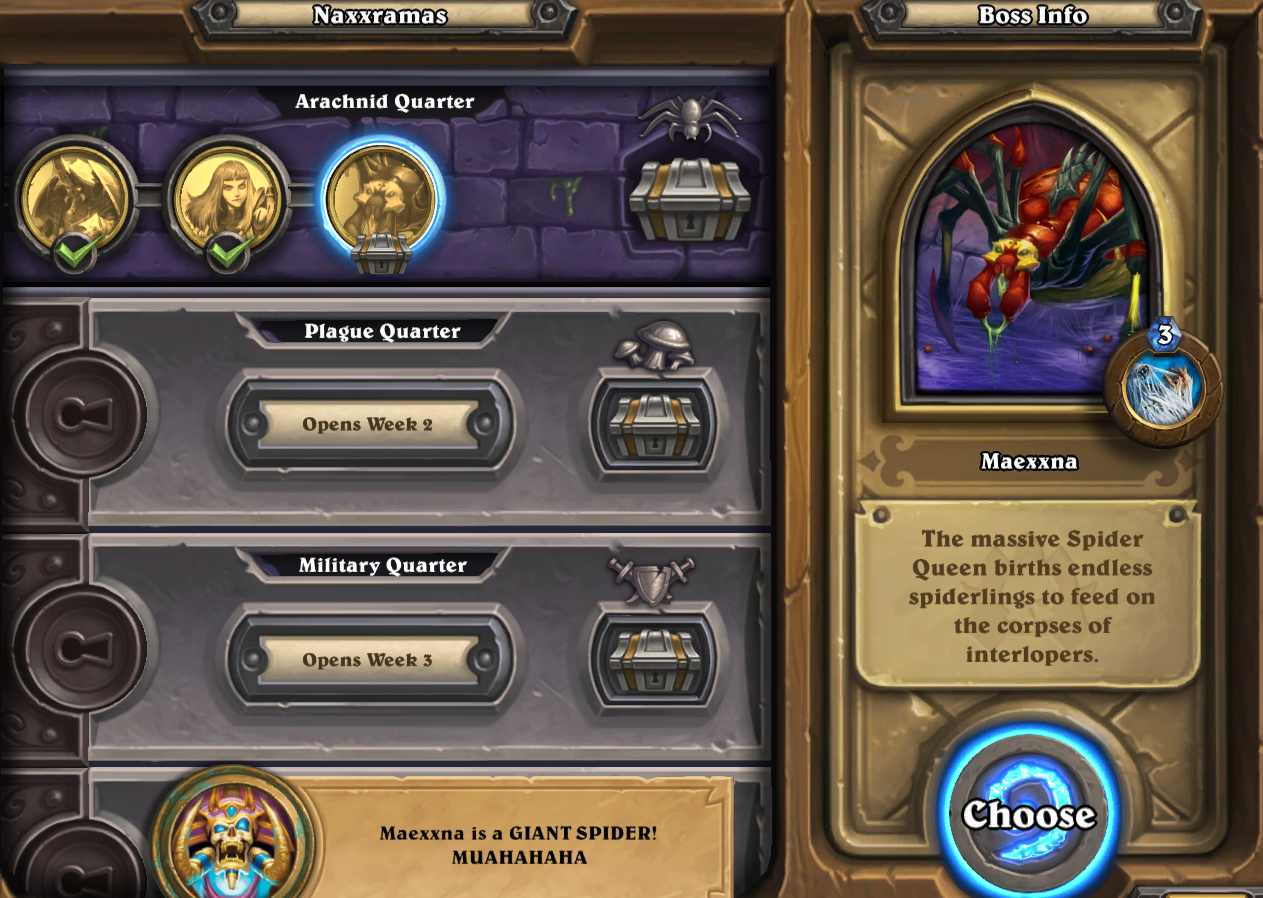 Maexxna being able to send back one of my creatures at random kind of sucked, but again, using my enrage warrior deck won the day, plus a legendary. The normal setting wasn’t too difficult, and was reasonably fun, all things considered. The new powers are fun to consider, but sadly, on normal mode, it usually just comes down to bursting through, which tends to be the most successful strategy in the game, period. At least the humor during this fight was a bit better, but let’s be honest: Most of Blizzard’s humor tends to rely on either poop jokes, references to their other games, or pop culture references, all of which I enjoy from time to time (including today), but it’s not something that keeps bringing me back.

Given the options for my next step, I decided to try out the class challenges. I went with the rogue first, and I must say that it was quite easy. Naturally you’ll want to mulligan (trade cards at the start of the game for a new hand) for low cost creatures, especially aiming for the Defias Ringleader, but overall, the match should feel familiar to what you naturally do as a rogue. One thing, though, is to save your Big Game Hunters for when the Sea Giants appear. The druid challenge felt even easier since, even ignoring the combos with Stoneskin Gargoyle, the challenge wasn’t much of a challenge. I suppose getting new cards is fun, but if this is something that’s supposed to tide me over for a week, it’s a bit disappointing. At the same time though, these matches don’t count towards my daily quests, so perhaps that’s why they’re not very challenging. 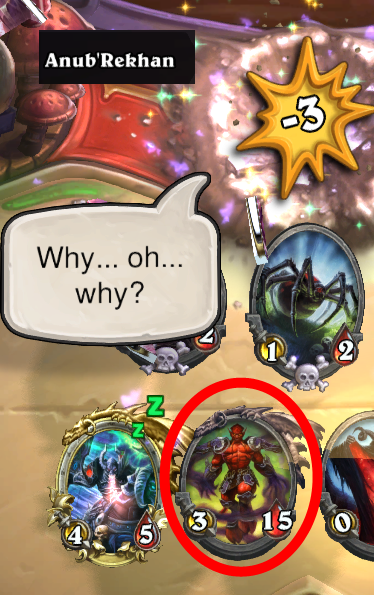 Lastly, there were the heroics. To note, there’s no current reward for clearing the heroic mode aside from bragging rights, though I’ve heard that once you clear all of them, there will be a special card back. That’s fine, since I feel like “having” to purchase the wings to have access to the cards in constructed kind of sucks (we already have the random factor to deal with!), and it does give each wing a bit more replay value because it’s harder to steamroll through. For example, the bosses’ abilities change in heroic mode plus they get more health. They’re still able to be beaten, even when they may screw up your deck’s theme pretty badly (OBLIVION!), but it’s certainly more difficult than the normal mode.

It should be noted though, that by this point, I realized you will never see the coin in Naxxramus. The game is set up to never allow it. Also, as others have noted, Maexxna on heroic is quite difficult, but doesn’t feel impossible, even though it is quite cheaty (starts with 2 creatures plus it’s power send back two of your creatures at random per turn). The AI, however, is incredibly dumb, always sending your creatures back even if they have good battlecries, and generally attacks with its strongest creature first. It’s predictable, which is why you can figure out how to make a deck to beat it or just borrow one.

In general though, the first wing and general concept aren’t fun enough. It’s entertaining, yes, but a TCG that asks me to play against the computer? It just doesn’t feel right in this day and age for a single player experience coming from a game known primarily for its multiplayer component. I can see how a mid level player with some decent cards might be more motivated to play it, in that the normal mode and class challenges might be challenging (I’m still viewing heroics as bragging rights), but just the same, I’d think they’d be playing mostly for the cards and not so much to train their actual skills.

The game’s initial training mode was good enough for that, and the heroic versions of the classes never added anything to me except for a way of getting some gold. If you feel done with Hearthstone, I don’t think these single player adventures will bring you back, but if you were still active and feeling that the game was getting dull, the new cards, at the least, should bring in some excitement.