We’re on the final wing of Hearthone’s Naxxramas, and unlike the previous wings, this one requires you to purchase the past 4 wings to unlock. While we have your usual help from Hearthhead up and running, I’ll once again add my 2 gold worth of experience and opinions after the cut.

This week’s card breakdown’s probably the easiest and most obvious. I want to get the big guy out of the way and start with Kel’Thuzad. While he’s big and beefy with an awesome power, the problem is that he simply costs too much. It’s a “win more” card, in that you can only really play it when you have an advantage. If you only have 1 card on the field, Kel’s nearly useless, especially with his high cost, allowing you to play very few cards in addition to him (depending on how much mana you have). If you play with a lot of taunt mobs, it might be ok, especially since Kel brings back all your minions from each turn. That gives you license to attack who ever and whatever with near reckless abandon, but also means Kel will be a magnet for removal spells. Good luck making a deck around him!

Echoing Ooze, on the other hand, is a great card all around. Not only does it combo well, but it’s low cost makes combos easy to execute. Bouncing it back to your hand can make things even more difficult for your opponent if you can combo it again later. Just remember that it can’t die during your turn or else it’ll just, well, not clone at all.

Shade of Naxxramas is interesting in that it’s like a small, weaker, but stealthy version of Gruul. It grows at a slower pace, and at the start of your turn, so it can be quite vulnerable, but that’s also a blessing. It’s potential for disaster grows each turn, so opponents may feel pressured to blow important cards to get rid of it sooner than they’d normally prefer. I can imagine it working well with both control decks and zoo, acting as a coup de grace for the slower moving control deck or as a as the muscle needed late game when the zoo deck’s running low on steam.

Paladins finally get their class card, Avenge, which obviously combos well with Noble Sacrifice. The obvious downside to this card needs a target to work, so mass removal cards or only having a single minion out make the card a bit weaker, but overall, +3/+2 for 1 mana is a pretty good deal, especially with the paladin’s hero power and divine shields.

So, after last week’s idea that Naxx is for people who like theme decks and normals are just so… well, everyone else can get free cards, I tried to go in with lower expectations. When I fought Sapphiron, I tried to ignore the idea that the ability was yet another example of a gimmick that really broke a lot of cards but was still pretty easy on normal mode, falling to my fairly standard, no epics hunter beast deck.

The Kel’Thuzad fight was interesting. When you break his armor, his hero power changes into an 8 mana mind control, he immediately ends your turns, and then summons two 3/3 minions with block. My usual priest deck beat him, but I felt like this fight was actually memorable. Unlike past bosses, KT interacts with you more, not just with taunts, but interacting with your message options and even your hero’s entrance lines (yes, I went into the fight with each hero to hear his unique greetings to them). The quips with the voice acting, the mechanics, and the feeling that there was a mid-way point in the battle made this feel more like “boss” rather than a gimmick fight. It took awhile for me to get this feeling, but I applaud Blizzard on this encounter and hope that, should they do more “raids,” they have encounters more like this (and perhaps make them multiplayer).

The class battle was at least decent training in making combos for new players, especially revolving around the Echoing Ooze we talked about before. In that way, this felt like one of the better class battles, but only for learning. I still think the hunter one was the most fun.

When it came to the heroics though… the Sapphiron battle was truly annoying. While before we got a card to protect some of our minions, the heroic version removes it, making you play a largely minion-less deck. More than any other encounter, this one felt not only gimmicky but lacking in any remote usefulness as a teaching tool for players. I was able to make a hunter deck that was able to beat him without any epics or higher though. I suggest trying for a bow and an egg in your opening hand, but from there, you’ll just have to be careful. Play aggressive, but smart. Don’t get overwhelmed by minions, but take advantage of your traps and deathrattles, saving the puppies for the late game when you have the mana for combos.

Kel’Thuzad on heroic was pretty much the same except beefier: the initial heroic power deals 1 damage more, he has 45 health/20 armor, the minions he summons when the armor breaks are 5/5s, and he has Twisting Nether. Honestly, the fight felt straight forward enough that I just made a few modification to my usual priest deck, which is already very cheap to make, and after a few tries, beat him. By now, you should know my usual combos (Power Word: Shield, Inner Fire, Divine Spirit, and of course, Lightwell), where I buff something to holy hell and just ram the opponent. However, be careful to start the ramming sooner rather than later if possible. The deck stalls well and finishes cleanly if you attack soon enough, but the Twisting Nether and 8 mana mind control ability can really mess you up.

Sorry to say it, but I must admit this I didn’t get a lot of time with the arena this week, but from what I saw, the new cards had a surprisingly smaller impact than expected.  Undertaker and  Dark Cultist were fairly common in my experience, but easily dealt with. I saw a lot more priests this week, and rarely did I or anyone I play against have a chance to benefit from it’s deathrattle. Just the same, they added a sense of urgency to my usual war on minions, which I usually target anyway. Zombie Chow, oddly enough, appeared quite a few times, and rarely worked out for my opponent, who rarely played them at the start of the match. My ability to kill it actually won me enough health to get not one but two wins this week, so let that be a lesson to you: it is far too risky a card to pull in arena. Save it for drafted when you know you can have 2 and can set up your combos. 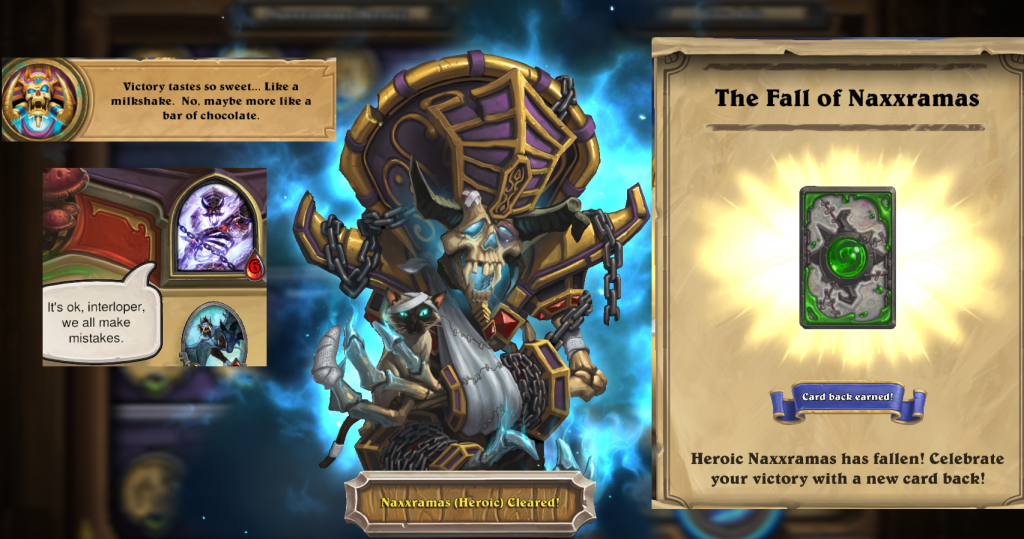 This is the end of Naxx, but there’s more on the way for Hearthstone. We’ve learned that there won’t be any new classes in the foreseeable future as it’s been deemed too complicated, but there are a few things we know in the works. 2vs2 would be great, but obviously expansions are easier for the team to do, as are achievements. When more develops, you can be sure we’ll let you know, Junkies!