So you’re level 50. Congratulations, you have come a long way. But what’s next? Whether you are a fresh adventurer or a returner, at this point, there are a lot of things to catch up on currently in Final Fantasy XIV: A Realm Reborn. You might want to go back to level another class or hurry up to hop on the raiding wagon. If you choose the latter, then here’s a list of things you would want to do in Patch 2.35.

This will open the doors to most endgame content.

This quest will give you your first shiny weapon. It requires you to have completed “Main Scenario Quest – The Ultimate Weapon”, your final Job Quest, and to have unlocked Amdapor Keep.

(If you have not done Aurum Vale, you should do so to unlock Amdapor Keep. I recommend unlocking Aurum Vale via the Grand Company quest so you don’t have to go back and do it again when you need the GC rank up. A lot of people loathe Aurum Vale.)

Go to Vesper Bay to talk to Nedrick Ironheart once you have all the requirements needed. Upon completing “A Relic Reborn”, you will also have 5 Trials unlocked, ready for Trial Roulette.

3. Get Your Cross-Class Skills:

This step means that you’ll have to take one step back to level up some other classes, but believe me– it’s worth it in the long run. Some cross-class skills are extremely useful. Here’s a quick guide for what you’ll probably need to work on, depending on your class.

Not only does Duty Roulettes reward you daily with Tomestones which you can use to upgrade your gear, but later if you decide to follow the Relic Novus trail, it will also help speed up the process a lot.

It will take a while to unlock all the Duty Roulette content, so the next few items on this list are things you can do in between to raise your ilvl.

One good thing about Crystal Tower (CT) is that no one cares if you are a newbie or not, and they don’t care if you know what to do either. The veterans don’t go there. It’s a haven for newbies. That’s also a bad thing. People that go to CT don’t really know what they’re doing, so it’s extremely frustrating after a few wipes at trash (which is why veterans don’t go there).

To get started, unlock the quest called “Legacy of Allag” from the Outlandish Man in Revenant’s Toll, Mor Dhona.

Mythology Tomestones (Myth Tomes) can be exchanged for ilvl 90 items from Auriana in Revenant’s Toll. The tomes are used to get many parts of your Relic weapon later in the game, especially if you are going to go all the way to Relic Novus.

Soldiery Tomestones (Sol Tomes) can be exchanged for ilvl 100 gear sets and an item called Rowena’s Token (Soldiery) which is used to purchase ilvl 100 weapon from Aelina in Revenant’s Toll. A lot of people now choose to get this weapon instead of upgrading their Relic after they get Relic Zenith.

Grinding dungeons are certainly the easiest way to get Tomes.

There are 2 very easy dungeons for Myth Tome speed runs: Wanderer’s Palace and Brayflox’s Longstop (Hard). Nowadays if you can find the party to do speed runs, it is faster to only farm the first 2 bosses in Brayflox (Hard). However, before you get the requirement to go to Brayflox Hard, just do Wanderer’s Palace. The drops in both dungeons could get you a good amount of gold on the Market Board as well.

Although it is tempting to do speed runs, don’t do it if your tank/heal/DPS are fresh lvl 50s and your tank isn’t able to hold 9+ mobs at a time. I recommend doing a semi-speed run for people with ilvl 80 or lower: Pull 6 at a time, and hold your liquo… mobs!

The easiest way to get Sol Tomes is via Expert Roulette. If you do Expert Roulette every day, you will cap total Sol Tomes weekly allowance in less than a week. Otherwise, run whichever high level dungeon you’re most comfortable with.

Although The Hunt is not a necessity for fresh lvl 50 players, I still decided to place it before the raids in this checklist because it’s easy, it can be done whenever you feel like it, and you can save up slowly for when you’re ready to get ilvl 110 gear. You do need to have max rank with your Grand Company in order to start, so if you haven’t done this yet, please do so.

Daily Hunt gives you 32 Allied Seals in total. Weekly Hunt gives 50 Allied Seals. Ranked “A” open-world boss kills give 20 seals, and ranked “S” kills give 50 seals (if you contribute enough). It is recommended that you have a full party for “A” and “S” ranked Hunts for maximum contribution rewards.

With Allied Seals, you can purchase items from your GC Hunt Billmaster. Among those items there’s a Blood-Splattered Mark Log which you can purchase for 250 seals each. You can exchange the Mark Logs with Aelina in Revenant’s Toll for Sand of Time (3 Logs), and Oil of Time (2 Logs). Sand of Time is used to convert your ilvl 100 Soldiery gear and weapons into ilvl 110. Oil of Time is used to convert ilvl 100 Soldiery accessories into ilvl 110.

The Hunts unlock at your Grand Company Hunt Billmaster.

8. Unlock The Binding Coil of Bahamut:

After completing the “In a Titan spot” quest, you will gain access to your first serious business endgame content. You can grab the quest from Urianger in The Waking Sand.

Made available for everyone via Duty Finder in patch 2.2, you no longer need a pre-made party of 8 people to do the 1st Coil. However, most people still prefer having pre-made parties so check Party Finder frequently or make your own with the Party Finder.

From this point on, reading guides and watching videos is recommended for all serious business content in order to save everyone’s time. Don’t hesitate to tell people that you’re new and ask for advice. Most people will always take time to explain. Just keep in mind that no one likes noobs who don’t want to learn.

If you’re a fan of PvP you can unlock Wolves’ Den and Frontline from your Grand Company.

PvP works a little differently to PvM– it has its own exclusive stat (Morale) and skills per job. You can get Morale gear from crafting or by turning in Wolf Marks that you gain from doing PvP. The new PvP skills will be unlocked as you level up in PvP. 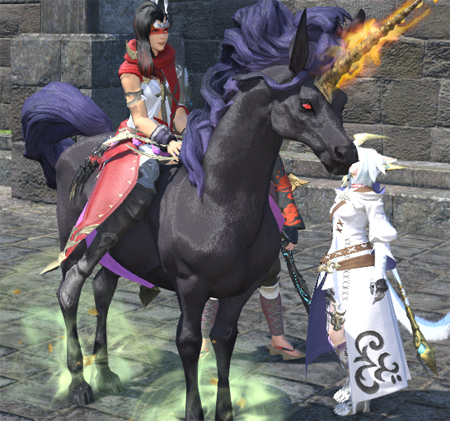 If you’re a fan of serious business fighting, you should unlock all of the Primal Extreme fights. It is recommended that you have at least ilvl 85 before you try one of those fights. The golden rule about Extreme Primal fights is that “If you can’t down the boss with DPS, down it with a lot of DPS”. The higher your ilvl is, the less painful the fight will be in general (still, don’t stand in the fire).

If you think you’ve got what it takes to face these evil beings (and have defeated Titan in Titan HM), go talk to Urianger in The Waking Sand. You need to defeat Garuda Extreme to unlock Titan Extreme then Ifrit Extreme comes after.

If you have completed “Main Scenario Quest – Lord of the Whorl”, you can also unlock Leviathan Extreme and King Mog Extreme from Urianger.

Once you’ve defeated Levi Extreme, King Mog Extreme, and Ramuh Hard, you can talk to Scarlet in New Gridania to unlock Ramuh Extreme.

Except for Ramuh Extreme, all of the other Primal Extreme can be accessed via the Duty Finder alone. If you want some practice on the fights you can use Duty Finder or Party Finder to help you along the way.

Once in a blue moon, you may run into some bored veterans who decide to join up in the Duty Finder for some laughs and you might even get a shiny super rare mount (that was how I got my Titan mount)… but honestly, if you die early in the fight, don’t roll for that mount…

There are two kinds of ilvl 110 weapons. All of them take time to obtain, but you can choose which suits your build more.

If you choose to walk the Relic Novus path, head down to Hyrstmill and talk to Gerold.

You cannot access Second Coil of Bahamut via Duty Finder and must have a pre-made party of 8 people. Static groups are preferable at this point, but if you don’t have the time to commit to a static group, there is still Party Finder.

Keep in mind that the raid has a strict weekly lockout. Once you complete a turn, you cannot go back until next week. So if you decide to join a T9 group and get a win, you won’t be able to do T6, 7, and 8 if you haven’t done so for the week.

Once you complete T9, you can talk to The Wandering Minstrel in Revenant’s Toll to unlock Second Coil of Bahamut (Savage). The fights will be harder and you will get unique titles and achievements but the drops stay the same.

14. Things to Do When You’re Extremely Bored:

P.S.: Send as many emails as you can to Yoshi-P and tell him to make a 16-bit FFXIV game for us to play!