The other day I did some light reading on Dragoons, and I have to admit that I know nothing about Dragoons despite having a level 37 Dragoon for months (I only leveled it to get Blood for Blood). One reason why I never really got back to Dragoon was because the first 34 levels was painfully boring compared to the experience I had as a Monk. The other reason was because I hated Dragoon for a very silly reason: They can get higher levels of crit than my Monk can ever get. See? It’s covered in lime jelly.

I came across this topic while doing my research, and although the guy was a bit whiny, I agree with the fact that FFXIV is a little unfair toward melee classes. In my personal opinion, the game is more unfair to Monks than Dragoons, but that is totally not the point of this article.

It is true that there was a time when all parties in party finder and shouts were looking for Bards or magical DPS (preferably Black Mage). Why? Are melee that bad? That is actually not the case at all. Melee classes are those that deal the most damage to single targets, their single target Limit Break is the best option in most cases, and they can survive raid damage better than magic DPS and Bards (at least against latency bosses). Why are melee so unwanted?

First of all, it needs to be taken into account that melee classes are hard to perform at their peak. No other classes have to be specific about positioning (heck, Bards can even run around the arena and won’t lose any DPS).

While it’s not so bad for Dragoons since they only have a few skills that you need to change position for, Monks have it worse when it comes to certain fights where it’s preferable that everyone stack tight behind the boss’s backside. It only improves when you get used to the boss’s rotation to fit in a few flank attacks where it’s possible and safe. Not to mention those Greased Lightning killer fights… it’s painful to watch your hard-earned 3 stacks of Greased Lightning slowly ticking away while the boss is invulnerable or unreachable. 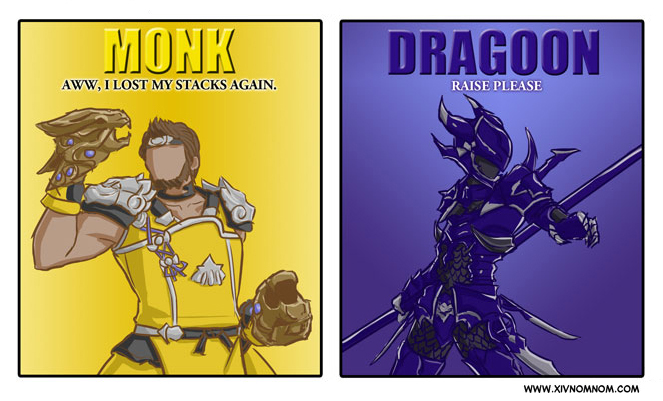 That’s not to say that Dragoons have an easier life than Monks. I didn’t play Dragoon long, but my significant other did and he said it’s easy to play DRG but it’s really hard to play DRG right. He’s not the only one with that opinion.

There is a reason why there are only around 5% of the Dragoon population that are really good at what they’re doing. The rest of the population gives Dragoon the reputation of being the worst job in the game which comes with jokes like “If you’re not dying 4-5 times in a fight, you’re not Dragooning hard enough”. Worse, people are secretly betting on when that Dragoon in your party is going to die during the boss fight (*cough cough* I got a fair amount of ice cream out of that).

And from what I’ve heard, most Dragoons aren’t even doing their rotation right. They skip on important combo skills which results in low DPS. But don’t worry Derpgoons– you’re not alone. I can introduce you to the Monktards who don’t even know that their attacks have specific positioning that allow for more damage… If they haven’t given up on MNK and switched to DRG yet, that is.

So because both melee jobs are hard to play, only a few of those who play melee are good at playing their job. Most static groups already have a good melee so there is no reason to look for another via the party finder, especially if they don’t know whether or not they would get one of the Derpy ones instead. It’s a risky gamble that most static groups don’t want to take. Besides, one melee for using Limit Break is quite enough.

Secondly, there are many fights at endgame that don’t favour melee or preferably no more than 2 melee (even 2 is sometimes too many). The best example is Garuda Extreme. 9 out of 10 Garuda Extreme parties on Party Finder look for Bard and magic DPS to use the Suprana strategy. The others are either learning parties or parties formed by a melee DPS who can’t find any parties that would accept them.

It is not that it’s impossible to clear Garuda Extreme with melee classes (believe me, my first clear was in a party of 4 melee), it just takes more time. The Sup strat with melee is also possible in order to make the fight faster, but this requires melee to know when and how to dodge. The general mindset, however, is who wants to take that risk? It’s better to simply reduce that risk.

I still remember one time in Twintania (Coil of Bahamut Turn 5) after a few wipes, my party decided that we had too many melee (2 Monks and 1 Dragoon) and we had to get rid of at least 1. Otherwise, the Dreadnaught phase was deemed too difficult. Of course, it was partly because I was really inexperienced back then having only 1 clear prior, but the general consensus was that a Bard would be nice and would allow everyone to spread out easier.

At the beginning of the Relic Animus and Novus quest, people started having Myth speed runs again. One crucial part of a speed run is to grab all the mobs until the boss room then AoE them down as fast as possible. Fallen victims to this strategy are the melee and Summoners (to a lesser extent). We (the melee) also need Myth tomes, but nobody cares. It’s a speed run so speed is crucial. If you are not Bard or Black Mage then they don’t want you. When it comes to AoE, we might not be as good as a Bard and Black Mage, but we still can do it and we can do it well, too. Our AoE may be a few seconds slower than the other 2 jobs, but does a few seconds matter so much? Apparently so…

In the end it all comes down to the players, really. There will always be parties that take in a melee who really deserves the spot and kick out a ranged that doesn’t. And friends from linked shells, free companies, and from previous dungeons will always come to help you, even if you don’t play that well. To me, my Monk is just as good as my Summoner, and Dragoon is just as boring as Black Mage. The only superior job among the DPS is perhaps Bard? They’re constant and flexible at DPS, useful with all their buffs, and good at AoE. The only drawback is that their Limit Break is like a gut-punch from the game designers.

The post FFXIV: Are Melee Unwanted? appeared first on JunkiesNation.