With the arrival of 2013′s Fae Yule, there are a number of new items and achievements to grab this year. Among the new items is a new RIFT Store lockbox– the Fae Yule Grab Bag. Players can find a number of new, unique Fae Yule pets in the grab bag that go towards completing a new achievement to obtain the Snow Ki Rin mount. On the surface, it looked like this new lockbox and accompanying achievement were yet another content addition that could only be completed by putting cash toward the in-game store, but Archonix made an interesting announcement on the forums late last night.

It appears the Fae Yule Grab Bags were supposed to drop from mobs in the game world as well as randomly be found in the Patron daily gifts. Since they are not currently set that way, they will be made to do so in next week’s hotfix. As a bonus, these boxes that drop in the world and from the Patron daily will also be made tradeable.

Sorry guys. These should have started dropping in the world today as well as having a chance to be included in the Daily Fae Yule Patron Gift. I’m making sure that they are all hooked up for next weeks hotfix as I type this.

Since we screwed this up, we’re going to make the versions of the boxes that drop in the world, as well as the ones from patron gifts tradeable. Happy Holidays!

Archonix also posted an interesting screenshot in the same reply: 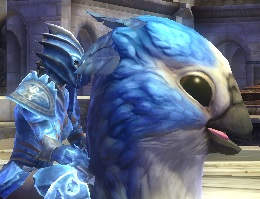 Fun little image edit or hint of a new mount that may be found within the lockboxes? Your guess is as good as ours, but it’s pretty cute!