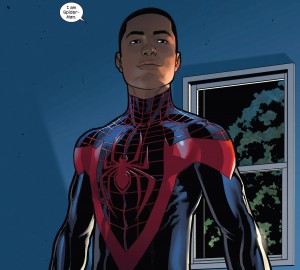 While Twitter didn’t exactly get its wishes grated by Disney magic, it was announced on Tuesday that Donald Glover is going to voice one of the incarnations of the famed web-slinger on Disney HD’s Ultimate Spider-Man: Web Warriors. Glover will voice Miles Morales, the pre-teen who takes the place of Peter Parker after his death. The casting is certainly apt, since the campaign to case Donald Glover in the Spider-Man reboot inspired the creation of the character.

Of course, it doesn’t take long for things to get awkward when Parker comes face-to-face with his successor. USA Today has already published an exclusive clip of the characters’ meeting.

The season premiere of Ultimate Spider-Man: Web Warriors will air on Disney HD Sunday, August 31st at 9am ET.

The post Donald Glover is Spider-Man (Kind Of) appeared first on JunkiesNation.