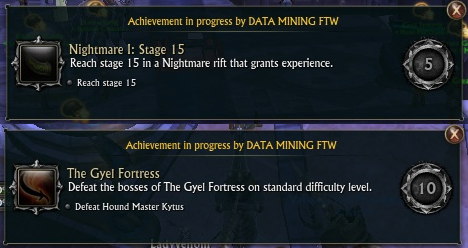 The RIFT forum’s favorite datamining expert has been at it again, and this time TehFrank uncovered some interesting achievements in the PTS files that point to new content headed our way. Take a look at the two achievement images to the left. It looks like we’ll be getting a new type of rift called a nightmare rift as well as a new dungeon with multiple difficulties by the name of The Gyel Fortress.

Notes: All datamined info and PTS info is subject to change at any time. Most of the talk that follows is mere speculation at this point.

Ready for some speculation? Since the nightmare rift achievement is separated into ranks similar to how Great Hunts currently work, it can probably be assumed that nightmare rifts will work in a similar fashion and will most likely be activated by players and will be of varying difficulties and have many different types. It also looks like nightmare rifts are going to have a lot of stages. The difficulty for the higher stages will probably be fairly high (or least require a decently-sized group) and it also seems probable that there will be a timer involved and rewards that scale to the number of completed stages.

Given the scope of a completely new type of rift as well as multiple stages, ranks, and types of rifts (as well as the name itself), it’s probably safe to speculate that this content is technically part of 3.0, but may be added earlier to the game as part of Trion’s plan to release chunks of expansion content before the expansion actually lands. It also seems like Gyel Fortress may fit that same bill and might even be our first leveling dungeon in 3.0.

TehFrank also uncovered a few names of zones hidden within the PTS files: “Goboro Reef”, “Draumheim”, and “Tarken Glacier”. These names all seem very much in style with 3.0 and the Plane of Water. The names may also be related to areas shown in the image above which was Trion’s early vision of the Plane of Water.

Interesting stuff! Thanks to TehFrank for always being a super sleuth. Oh, and yeah, he also found files for various pets with Santa hats. Thanksgiving’s over. That means it’s time for Christma– I mean, Fae Yule, right?