For a few months now, Daglar has tried to keep an open line of communication with RIFT‘s PvP community. He’s discussed his honest thoughts on world PvP a time or two, and didn’t hesitate to express his opinions on why multiboxing in Warfronts saw its swift demise a month ago. He even has taken the time to add additional alternate-mode Warfronts to the game on his days off. Daglar wants to see PvP in RIFT more fun for everyone. The real question is… how?

Yesterday he took to the PvP forums again and posted a few long-winded but awesome thoughts in this particular thread, where players had been outlining and collecting a bunch of suggestions and ideas for the development team on what improvements they’d like to see regarding PvP in RIFT. He deluged some interesting info, and as always, was honest with his thoughts.

Many PvPers had hoped we’d see the arrival of PvP dimensions in the 2.4 update, but the feature isn’t quite ready yet. Daglar reiterated this fact and stressed that PvP dimensions, when they’re first released, “will be fairly bare bones. The intent with features like this is to test the waters and see how many people actually use it, then build on success where possible.” Initially, players will be able to create a PvP deathmatch setup within a PvP dimension and that’s about it.

He also mentioned that the feature will not launch with a queue. Players will have to join the dimensions manually where they have access to do so. If the feature is successful, the team may find a way to add a queue. There will also be no favor/prestige rewards for taking part in PvP dimension matches. Contests may be a possibility, however.

Daglar doesn’t view Conquest as a “flop”, but he does admit that it could be better and that he’d like to see additional maps added in the future. The team has started talking about what they’d like to change in the next implementation of Conquest:

“We’ve started laying the groundwork for the next version of CQ – in fact we’ve got a couple of layouts we are persueing. As always I won’t promise a release date – but I’d /like/ to get one out in 2.5.

Something that isn’t as player facing is just how the back end of the CQ stuff works. The system was built to not be as extensible as some of our other scripting. Pithos recently took some of his own free time (a while back actually), and extended the functionality so we can actually change up the game mode more.

Modifying the existing Stillmoor map is unlikely at this point in time as it would be more of a rats nest to update it than to simply build a new one with a new ruleset. The other thing to consider about Conquest is the intent from our end is to not heavily tax our art team and require them to build new areas. That was actually the driving reason why the map takes place in Stillmoor. By doing this, we can actually continue to produce the content we need to produce going forward (like 3.0).

For the next round of CQ we are looking at using the following mechanics:

Resources exist in the world – either in a few set locations, or randomly spawning locations.
Resources are carry objects – like you are used to, and may be taken from enemies.

Nodes exist in the world – either owned by teams or general nodes.

Resources must be taken to a node and successfully channeled/used on the node in order to increment your teams points.

The team is also talking about allowing any players that are level 50 or above to enter Conquest.

Daglar mentioned that Trion would like to redo the current PvP matchmaking system. The groundwork for such a redo started months ago, in fact.

“Under the new system users will be placed onto teams based on their rating and the system will attempt to fill in slots evenly based on ratings. In effect, mercenary will be in effect at all times – your base faction is not considered at all – it is effectively Red Vs Blue – though we are not going to re-theme all warfronts or re-script them – the Mercenary message will still pop up etc.”

More than once, Daglar has mentioned the fact that RIFT isn’t an ideal game for arena-style PvP matches in his opinion. It seems he has been talking to engineers about the possibility of instanced 5 vs. 5 team matches, however:

“Ultra caveat for what I’m about to say next – this is in no way a binding contract and I’m most certainly not telling you a game update number for this but I am actively talking to engineers about the following:

5v5 – Getting code support so that we can in fact set a warfront to 5 v 5 only mode and not in the random queue. You must be 5 players, you must be the leader of the 5 players to enter the queue. 5 v 5 mode does not award favor and prestige. 5 v 5 mode tracks a rating on the back end and there might be some potential to give either a title or special border to the top percentage of users. This mode would not be active all the time. It would start as a special event / contest.”

The team’s always looking to add in additional Warfront maps, as these can be used for multiple team sizes in the future. 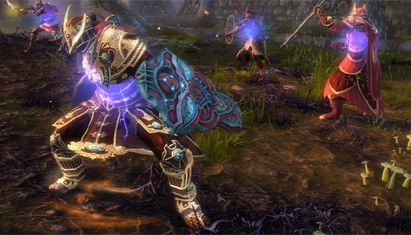 At this point in the game, redesigning souls/classes from the ground up isn’t really possible, but the development team is looking to focus heavily on re-encouraging players to use hybrid specs again instead of pure 61-point specs all of the time. If done right, this would give players more options for PvP (and PvE, of course) without destroying balance.

Daglar seems open to ideas regarding how to make PvP progression not quite as gear-based, but isn’t quite sure how to tackle the issue exactly. He did mention in a later post that if Trion does add in 5 vs. 5 matches, gear progression won’t be the central reward for taking part in these matches. “It isn’t about another gear grind,” he said. “It is intended to be about going out and showing folks who is best – and changing your target portrait for the top percentages is exactly one of the things we discussed.”

He doesn’t seem quite as willing to budge on the team’s stance regarding encouraging players to participate in more than one type of gameplay style in RIFT (the Conquest PvE “requirement”, for example).

In a different forum thread yesterday, Daglar touched on the issue regarding Mercenary gear being essentially useless now:

To be very blunt, we’ve made this same sort of change in the past and not seen this sort of large scale response.

There are a lot of good arguments being made on the forums and elsewhere about a lack of our communication on this specific subject, and the fact that many users have only been in game for a few months – as opposed to the situation we were in before where we did not have a massive influx of new top end players.

Because of this, we are in fact doing something about it. Mercenary gear is having a recipe added so that you can consume it and gain favor from it. This will allow anyone with mercenary gear to effectively trade it in for Freelancer gear.

You can expect this to go live in next week’s normally scheduled hotfix.