The realm of internet geekdom was aflame last week over a blog-post written by Denise Dorman, the wife of Einser Award-winning Sci-Fi/Comic artist Dave Dorman. In her initial post, Dorman argued that a new culture was emerging that didn’t value those aspects of a convention–particularly consumerism–that she felt should be held highest. The blame, in this post, largely fell on cosplayers. This sparked many rebuttals from the vibrant online cosplay community—and, as usual, harassment and threats from anonymous commenters. I’d suggest going to read the full post, but here is some of the text that sparked the largest reaction:

“I have slowly come realize that in this selfie-obsessed, Instagram Era, COSPLAY is the new focus of these conventions–seeing and being seen, like some giant masquerade party. Conventions are no longer shows about commerce, product launches, and celebrating the people who created this genre in the first place. I’ve seen it first-hand–the uber-famous artist who traveled all of the way from Japan, sitting at Comic-Con, drawing as no one even paid attention to him, while the cosplayers held up floor traffic and fans surround the cosplayers–rather than the famed industry household name–to pose for selfies.

The hard-working artists and creators who are the very foundation of this industry…the reason there even is an industry….those creatives who have busted their asses and spent money they perhaps didn’t have to spare in order to be there exhibiting for–and accessible to–the fans…have been reduced to being the background wallpaper against which the cosplayers pose in their selfies. At what point do you start to wonder if–other than your faithful, loyal regulars who are like family and who find you every time–the general fandom population even gives a shit about the creators more than they care about their Instagram profiles?” 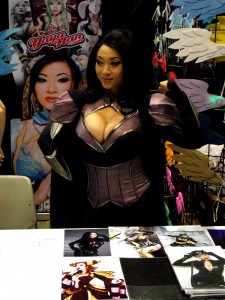 In a later post, she qualified this statement, saying that she was lamenting the fact that comic conventions had changed from being a “commerce-driven event” to being a “social gathering-driven event”—the basis of which I can see in her initial post, although it was largely overcome by her disdainful attitude (which was understandable, given the timing of her post).

“It’s not the Cosplayer’s fault. They’re just being gracious and accommodating to the fans. That’s their role. It’s the new breed of attendees who are there because someone said it’s cool to be there; they are the ones completely unfamiliar with the comics industry. They are the ones who attend any hard-to-get-tickets event just to boast online. They are the people I take issue with. NOT the Cosplayers. Those are the people who care only about their selfies on their Instagram profiles. Those are the people who hijack events like #Burning Man, #Coachella and #SDCC with no understanding of why these events exist, or their raison d’être. Once they show up to the party, the event jumps the shark.”

While my reaction to the initial article was rage—and a Twitter rant—her later qualifications certainly have a ring of truth. I have attended six conventions so far this year, including the Wizard World Chicago convention that Dorman lambasts in her article. Most of these conventions are ones that I have attended in previous years, but quite a few were new conventions. I’ve noticed a change in the tone of the older cons, as well as seen a new type of crowds in the newer conventions.

Back in May, I attended the brand-new Indy Pop Con in Indianapolis, Indiana. While I was there, I felt that the con was wonderfully run and fostered a great environment for its guests. After the convention, though, I learned that vendors on the convention floor had experienced miserable sales. Some complained about making no sales, with attendees either content to just look at their wares, or to completely ignore the booths all together whilst traversing the convention floor. Consensus for “blame” seemed to fall on the convention’s broad targeting, as they encouraged fans of “pop culture” to come to the show. This, and the fact that (up until this year) Indiana had only one nerd-related convention (Gen Con, a tabletop gaming convention), meant that a lot of the guests were not well-versed in convention culture. Many emerging conventions—and there are a lot of emerging conventions—have similar targeting tactics. In order to make a successful first few years, the convention just tries to get as many people through the doors as possible.

So, on the one hand, we have these new conventions trying to get any and all guests through the door. On the other hand, we have our established conventions, which are becoming much more commercialized—but not in terms of increasing commerce on the vendor floor or within Artist’s Alley. These conventions have built a business model that relies on “big” entertainment names to draw people to the convention, despite high prices for tickets, autographs, and photo-ops. These commercialized cons focus on drawing in crowds through promise of an experience—they get to meet their favorite stars, or at least see them in panels. You pay an average of $ 60-$ 100 dollars a weekend in order to just access (some) panels and the dealer’s room, and then pay more in order to “heighten” your experience. As a result, these conventions attract guests that have already paid large amounts of money just to get into the door, and are more focused on meeting actors or other people from the entertainment industry. Once again, conventions are trying to increase their income and ensure their survival by drawing in guests who do not necessarily commit to convention culture. For those attendees that are not particularly interested in guests, the commercialized conventions try to bring entertainment to the floor, which draws attention away from vendors and artists. 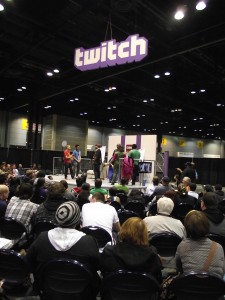 In the last five to ten years, the number of comic or pop culture conventions has grown substantially. Indianapolis, the capital city of my neighboring state, has gone from one convention to at least six conventions—in one year. Those who think themselves to be savvy entreupreneurs are seeing people argue that geekdom is becoming cool, and are looking to capitalize on the emergence of people who are proud to be seen at a convention. At the same time, existing conventions are trying to bring in some of this crowd, as well as capitalize on the increasing number of interested parties. They do this by bringing in guests who appeal to wider crowds, and increasing ticket prices to increase profits.
As a result, we have experienced a convention boom. The number of cons are growing exponentially, to the point where we are experiencing failed conventions—something that only would have happened in the most egregious circumstanced ten or fifteen years ago. We also have more people attending multiple conventions. Where attendees once saved up all year for one convention, they are now spending much smaller sums of money throughout the year at multiple cons. 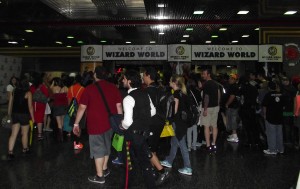 A large crowd jockeys for position to enter the convention floor.

Already, though, there are rumbling that conventions are getting too expensive. Fans lambaste Creation Entertainment and Wizard World for charging prices that are too high, and this has driven out a lot of the original crowds mourned by Dorman. They have either turned to buying their goods online, or to smaller conventions. This, in turn, leaves the new crowd to pick up the slack. But will we see these people return year after year? Or was it enough for them to meet Matt Smith, Norman Reedus, or Bruce Campbell once? Some fans who whole-heartedly embraced the boom of conventions have admitted to themselves that they can’t afford to go to so many conventions in one year. In fact, I’m planning on cutting the number of conventions I attend in half next year. The fact that there are now—dare I say it?—too many conventions means that many of these conventions are going to fail in the next few years.

In short, the boom of comic and pop culture conventions is drawing closer to its bust. It can’t sustain the oversaturation of the market. Consumers have les to spend on tickets and goods and, when they spend less, it drives away vendors and exhibitors. When there are fewer guests and fewer attendees, conventions will fail. We may return to earlier numbers of conventions, which may work to return the convention atmosphere to one of unabashed geekery, a moment of celebration our geeky community and the creators we love. So don’t worry, Mrs. Dorman. Things may return to “normal” pretty soon.

The post Comic Con or Bust: Is the Cycle Over? appeared first on JunkiesNation.