During last Friday’s Trion live stream we found out a few interesting tidbits and were shown some new things. First of all, Daglar showed up to announce that the Reaver Warrior soul is going to be made into a full DPS soul in the future. It will no longer be a tank soul, but the disease-spreading flavor of the soul will remain largely the same. Trion feels it’s simply too difficult to balance as many tank souls as there are (and will be with the Arbiter, the Mage tank soul coming in 3.0).

Vladd eluded to a similar note on the forums the other day and noted that the Paladin and Void Knight will be balanced so they are both on par with each other instead of remaining separate physical damage/magical damage mitigation specialists. From the sounds of it, these Warrior changes will go live somewhere between the post-launch period of 2.6 and 3.0.

Daglar also mentioned that the Tier 3 raids that have just started being tested on the PTS will be live somewhere near the end of the release period of 2.6. With the current staggered way that Trion has been releasing updates, we’d venture to guess that means they will release close to the release of 2.7. He also hinted that additional Tier 3 raid content may be coming out in 2.7, but not on the first day of its release.

We were also teased about some pretty adorable new mounts that are being added to RIFT very shortly– budgie mounts. These mounts have been teased on the RIFT forums a few times as well as datamined, but for the first time, the Trion live stream team showed off two of the budgie mounts along with their super cute animations. These mounts will be part of a week-long promotion Trion is holding either this week or next week called Chicken Week. Budgies really aren’t chickens, but I suppose the name “Chicken Week” does sound pretty amusing.

And here’s another budgie with blue feathers: 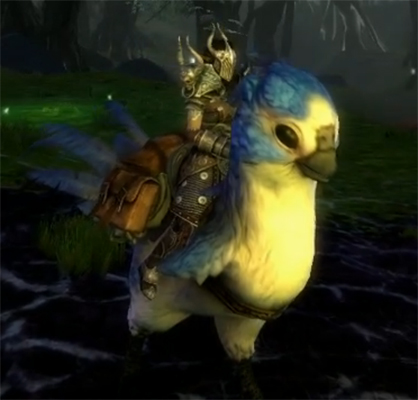 There will also be other types of budgie mounts available during Chicken Week. We don’t know too many details about the promotion yet, but this week’s live stream will cover the event in greater details. There will be new lockboxes, of course, which will feature one of the budgie mounts, but we were assured that there will be other ways to pick up a budgie mount as well.

The team also talked briefly about the Love Bug holiday event. The Love Bug and Mariel-Taun Day will be coming back for Valentine’s Day this year, and Trion will be adding a bit to the holiday. There will be new promotions around the event and even a contest or two from the sounds of it with rewards such as unique dyes.

The team also showed off some of the dimension wall trophies and other achievement rewards being added for one of the new RIFT 2.6 features: bounty hunts. Some of the neatest rewards include animal call items that can be used to create an owl’s hoot or a wolf’s howl (and many others!).

Here’s a preview of many of the wall trophies that are currently previewing on the PTS:

They also talked a bit about how bounty hunts will work in PvP. Yes, bounty hunts will be a part of PvP. Sort of. There are artifact sets that will have a chance to randomly drop off players who die in PvP. These artifacts will have to be looted and be rolled on by the group due to their rarity. Interestingly enough, the sets will be based off callings and souls, which means that if a Warrior is playing a Tempest spec, you’ll have a chance to get a Tempest artifact from their corpse. There are sets of achievements to gather artifacts from every calling and from every class and every calling. For players who aren’t particularly fond of PvP, these artifacts will be BoE along with all other bounty hunt artifacts.

Here are the four dimension wall trophies that are rewards for completing each of the calling bounty hunt acheivements. In order from left to right below are the Cleric trophy, the Mage trophy, the Rogue trophy, and the Warrior trophy:

For collecting every artifact for every soul of every calling, you’ll be rewarded with quite the appropriate title: Headhunter.